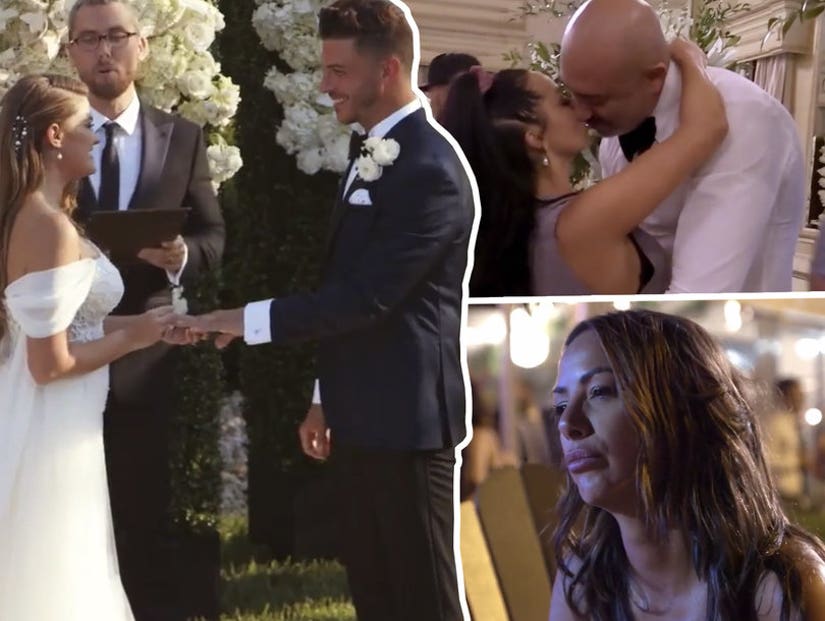 Lala cried, Sandoval lived his "teenage boyband dream" and Scheana hooked up with a groomsman.

After weeks and weeks of lead-up, Jax Taylor and Brittany Cartwright finally tied the knot on Tuesday's new episode of "Vanderpump Rules." And a few of their costars said "I do" to a little bit of drama on their big day.

Before walking down the aisle, Jax lamented the fact that neither of his parents would be attending. Following his father's death in 2017, Jax became estranged from his mother -- and apparently didn't hear from her on his wedding day. "I can't believe my mom didn't even text my godmother, nothing," he told Lisa Vanderpump, "That hurts my feelings." In a confessional, he said it meant "an awful lot" that LVP showed up, adding that she "just puts everyone at ease."

Since Lisa almost didn't make it following her own mother's death, Lance Bass stepped in to officiate the ceremony itself. As Brittany walked down the aisle, Jax couldn't hide his emotion as he whispered "Wow, she looks perfect" under his breath. Tom Sandoval, ever the best man, kept the hankies coming as the groom teared up.

The two wrote their own vows for the wedding, touching on their shared love of "Friends," Hooters and each other. Brittany went first, calling Jax by his real name, Jason.

"Jason, I have been absolutely crazy about you since the first day that we met. You're my best friend, my love and my whole world. Even though we can be very different at times, we balance each other out and you make me feel whole. We love so many of the same things like [their dogs] Kingsley and Monroe, Hooters and, of course, 'Friends.' I can't wait to see you as my husband and I already know you will be the most incredible father. You have made me the happiest girl in the world and i love you so much honey, you're my lobster."

Then it was Jax's turn:

"You have made me the happiest, luckiest man alive today and it's not because you love 'Friends' as much as I do. You walked into my life 4 years ago with that big beautiful smile and Southern accent, then you introduced yourself and told me you bartended at Hooters. My jaw dropped and I said I had to marry this girl. I've never in my life met a more positive, caring, giving woman who literally smiles all day long and just wants everyone to be happy. How could you not want to be with this woman? I love you so much and I'm so excited to be your husband.

The ceremony, held at a castle in Kentucky, was gorgeous. But with temperatures in the 90s, it also gave Stassi Schroeder a few ideas about her own wedding, should Beau pop the question. Note: this was filmed before he proposed.

"If we have an outside wedding, it will be in the fall or when it's cool outside," she told her man. "No sweat," she added, before he said, "and no kids."

Tom Schwartz then made an embarrassing and apparently extremely long speech at the reception, a speech which left Brittany's parents in shock. In it, he brought up how Jax used to "shit with the door open," come home at 4AM "wasted" and exposed the newlyweds for smoking pot at home.

Brittany's father-daughter dance followed, with Lala Kent -- whose father recently passed away -- getting emotional as she watched from the sidelines. "I'm so happy she gets to have that," said Kent, in tears.

While all this was going on, Kristen Doute and ex-boyfriend/sometimes hookup Carter got into a fight outside. Randomly, Kristen brought up how, when Carter is "scared and sad," he doesn't know how to verbalize his emotions. She then said he texted her the day before calling her "selfish and unkind," and accused him of doing it to "subconsciously manipulate" her into giving him attention. "I love you and I want to be with you," he told her, "but I don't like the way you've been treating me!"

"I've asked for space and I've given you space. It f--king breaks me, why do you want to be with me?" she asked. His response: "Because I f--king love you."

Even though she said it was "making me sad" to have him at the wedding, they still hooked up later that night. We're still a few months away from when she broke up with him in real life.

Following the reception, it was time for the after-party, which was filled with Hooters waitresses. Cue Lala: "This wedding has given me a lot of ideas for what I can do for my wedding. It's also given me things I do not want for my wedding. Which is Hooters girls with huge tits asking me if I want ranch with my chicken wings."

Sandoval lived out "his teenage boyband dream" by dancing up a storm with Lance, while Scheana Shay lived the single life by making out with one of Jax's groomsmen. The party hit a snag, however, when Jax found out there wasn't an open bar at the reception.

"$100,000 wedding and I f--king have this?!" he exclaimed, "I have 60 bottles of vodka and they're charging people." He then ran around telling anyone who'd listen, including those working at the event, "I spent $100,000 on this wedding. I want my f--king vodka there. They're charging people at my bar for drinks!"

Thankfully, Sandoval came through, got the vodka Jax had already paid for and the free drinks started flowing.

The night's festivities ended with Jax telling Brittany, "Big old titties, I love them. And I love you too," before waking everyone up early the next day so there wouldn't be any late checkout fees.