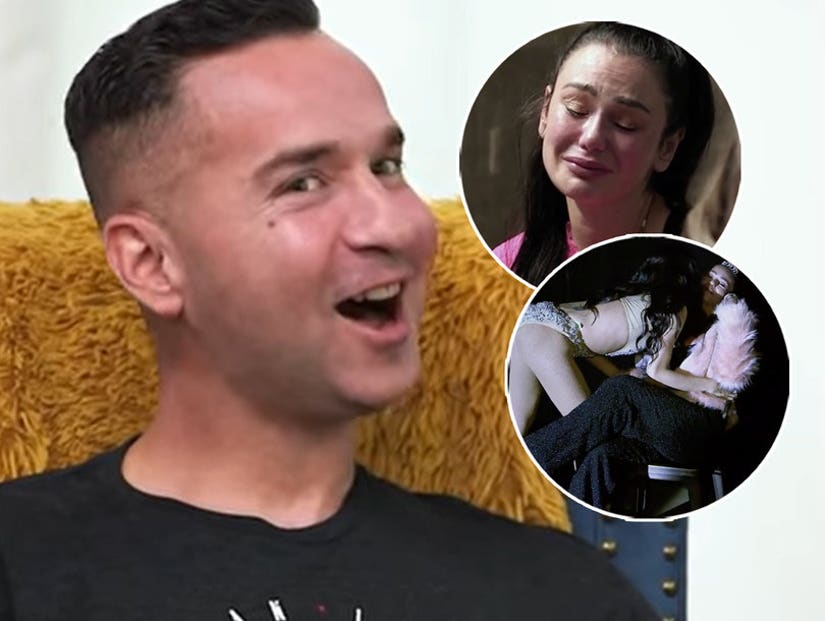 After a breakdown over coparenting issues with Roger, Jenni lets loose and puts the drama behind her.

It was a night of new beginnings on "Jersey Shore: Family Vacation."

The episode kicked off with Mike "The Situation" Sorrentino finally spending time with his costars following his prison sentence. They had "a thousand questions" about his time behind bars and did not hold back when it came to a few TMI topics.

Sitch explained that Vinny's Uncle Nino hooked him up with a good crew where he was locked up, a group that ran the kitchen and "made sure I ate well." He said he also hung out with a lot of Russians and picked up some of the language, as well as Spanish.

Sorrentino also revealed the prison went under emergency lockdown when President Donald Trump's ex-lawyer, Michael Cohen, checked in thanks to all the drones and helicopters. He then retold his chicken smuggling story, in which he asked Cohen to smuggle some poultry into the prison, only to have Cohen "chicken out."

Overall, he said the conditions weren't great and he could see how it could take its toll on people who were in there longer than a year. With that, his wife Lauren showed up, the gang gifted them a basket of sex toys and the two were off to put them to use ... and get a much needed facial.

The rest of the episode revolved around JWoww's split from Roger Mathews and their coparenting issues. The exes continued to battle about custody of their two children, with Jenni breaking down as she told Snooki and Deena that Roger was "not working with me."

She explained that she doesn't "get the luxury of being the fun parent" because she rarely gets the kids on the weekend, and just sees them a couple hours before and after school. "I just really miss them," she said through tears, "I don't want to go to court again."

In a confessional, she added, "I'm coparenting with someone who doesn't want to work with me and it's really heartbreaking."

Nicole had a great idea to turn Jenni's mood around, however, and planned a night out for them all to celebrate her divorce and "being free from all that shit." The festivities included taking a party van to a nice dinner, before heading to a drag club. Everyone went, with the exception of Mike.

At dinner, Angelina made everyone's eyes pop out of their heads when she said she was looking through her fiance Chris' phone when they started dating and found videos of his friends having sex with women. According to Angelina, he was the one filming them. That prompted some raised eyebrows and Pauly asking whether the two had an open relationship. They don't.

The group all had a blast at the drag club, where JWoww got all liquored up and received a lap dance from one of the queens. Though Angelina was hesitant about asking Jenni to be part of her wedding party -- because of their recent drama with "24" -- she got on stage at the show and asked all her female costars to be bridesmaids. They accepted.

While they all have something to celebrate right now, we know Angelina's wedding will bring some major drama to the show.