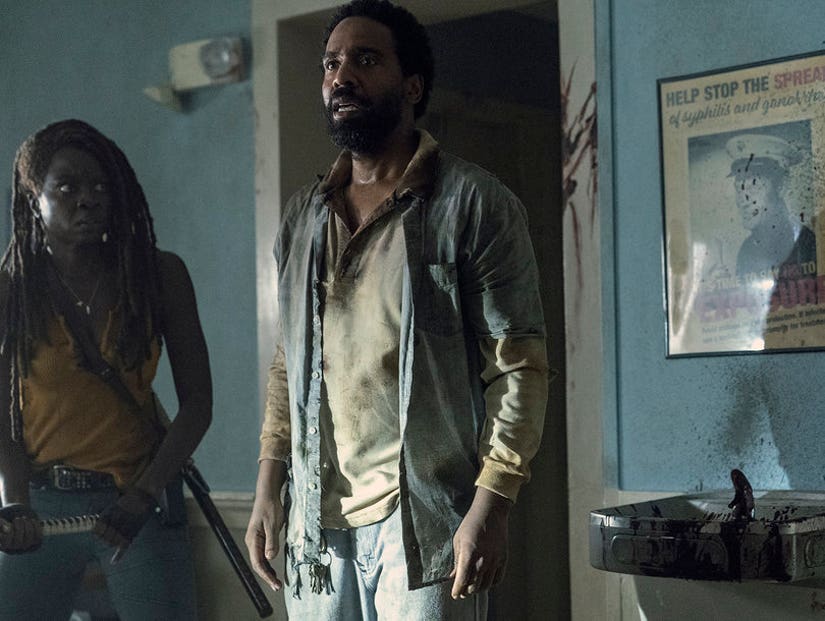 Sunday's new episode of "The Walking Dead" was a bittersweet one for guest star Kevin Carroll.

As Virgil, the role allowed the actor to really work alongside Danai Gurira, someone he's known for years -- but the hour also marked her final appearance on the show as Michonne.

You can read our full recap of the episode here, but long story short, Michonne went with Virgil to an island to look for weapons. While there, she found Rick's boots in storage and found out they came from a boat which had washed ashore. Virgil stayed on the island and she took off to look for Rick, in a storyline which will likely play out in the planned theatrical films.

TooFab caught up with Carroll after watching the episode, where he spilled on the emotion and focus on set for Gurira's last days, how the cast celebrated when she wrapped and whether we might see Virgil again down the line.

How much did you know about Virgil while going out for the role and how is it coming into the show as a character who didn't originate in the comics?

As any true fan of The Walking Dead knows information is King. The notion of the role is guarded heavily until every detail of one's deal is worked out and inked. Things move very fast in the world of television and with that said, there was very little info available about the character before we started but there was a sense of excitement about getting started once we arrived for work.

Coming into the show was stimulating because it felt like the creative team had taken a leap of inspiration in their imagination and brought on a character that was inspired by a world they knew well, but a character that they found and gave birth to as the journey unfolded. So Virgil seemed to have some anticipation about his arrival in this world which was nice.

At what point were you told you'd play a big role in Michonne's final episode?

It was mentioned after I booked the job. However, in the spirit of the way Danai worked on these episodes (extremely focused) we mainly concentrated on the task at hand. There was a general notion that this was her final episode, which would catch people off guard at times, but she didn't take too much time to dwell on that in the midst of the shooting. Danai tried her best to stay focused on the work while cast and crew would intermittently steal quick moments with her here and there, then everyone gather themselves and she would re-center herself and let it rip. Once things got rolling it was pretty much all down hill from there.

What were the emotions like in the table read and on set while filming. Obviously it must be exciting for you, but also bittersweet for everyone else.

The table reads were about taking care of the story first. Emotional stuff that came up would happen in response to the newness of the moment. Having each other to play off of as opposed to just reading it alone. Yes bittersweet for sure. Having known Danai for years there is a kind of trust that is built in and then for her to leave and the job happen so quickly was definitely unfortunate for me.

Did your friends/family try and get any intel out of you? How was it keeping the details a secret?

Friends and family didn't really try to get info from me, because I couldn't mention that I was on the show. But I almost got into several brawls, one or two melees and hit with a cane from an older fan of the show when people realized that I hadn't told them what was going on with Michonne and other burning questions about characters and people on the show.

Can you talk a little about working with Danai one-on-one.

I don't know what I would be able to say about working with her that has not been said. Danai is an all around artist in the role of an actor in this show. Incredibly giving, open, playful, and committed to the role and the show. I have known her for years and wanted to work with her and this was a great time and vehicle to have the opportunity but much too short of a time.

Is there any chance we might see Virgil again down the line, either on the show or in the movies? If you're able to say.

At this point it's hard to know what there is in store for Virgil. It was a lot of bang for my buck to be in the episodes that I was in but Virgil is not from the original comics. So I have a feeling that the journey may be given life or have life taken away depending on the connection the audience makes with the character. So...

Lastly, were you there when they called a wrap on Danai? Was the rest of the main cast around at all/did the crew do anything special to mark the occasion?

So I was not there when they called wrap on Danai but it was such an event that I was caught up in the tailwind of excitement the next day! There was apparently a huge late night party in the woods for her. A big to-do that no one wanted to stop doing! TWD loves Danai and Danai loves them!