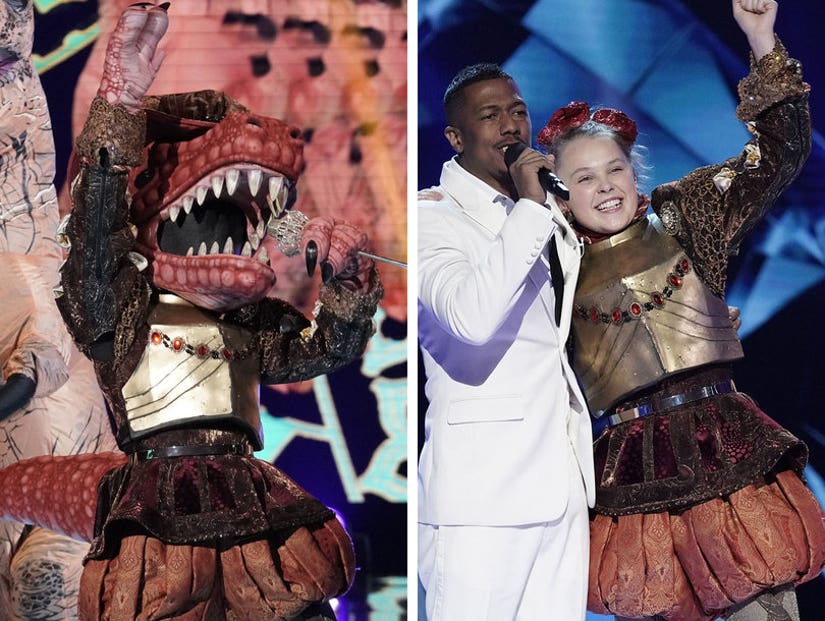 Siwa also reveals she's a huge Bella Thorne fan -- and was shocked when Thorne was unmasked.

JoJo Siwa and her side-pony were unmasked this week on "The Masked Singer," bringing an end to her time as the T-Rex on the competition series.

The YouTube star, who boasts over 10 million subscribers, was given the boot after her performance of the Pussycat Doll's version of "Jai Ho" on Wednesday's episode. Jenny McCarthy was the only one who correctly guessed she was the dancing dino, though others came close by throwing "Dance Moms" costar Maddie Ziegler's name into the ring.

The reveal wasn't a huge shock for many watching at home though, as the 16 year old's huge personality, stage presence and dance moves were dead giveaways to a lot of her fans.

TooFab caught up with Siwa over the phone on Thursday, where she revealed how she's been social distancing, what it was like backstage at the show and how it's been becoming close with the Kardashian family.

How have you handled people asking you if you're on the show? Because quite a few people guessed you were the T-Rex before the reveal.

It was hard. When people would ask I just wouldn't reply. I'm lucky because as soon as people started figuring out it was me is when quarantine happened, so nobody could ask me. Two days before my episode I got unmasked aired was supposed to be the Kids Choice Awards, and I was like, oh my gosh the red carpet is going to be a mess because everyone's going to be asking me about it and I can't talk about it. And then it got postponed.

Were you surprised the judges got close with their Maddie Ziegler guess?

It's crazy. They guessed Maddie like right away, it's insane. I think with the judges, they guess whoever first comes to mind and it makes sense, you hear 'Dancing' and go, that's Maddie.

Did you think about changing your mannerisms a bit, because your persona is so distinctive?

That's the problem. I tried to mask who I was at the beginning, but there was just no way to hide it. When my song comes on, I'm going to have that classic JoJo energy and I can't do anything about it.

Has anyone been unmasked so far that's really surprised you?

Bella Thorne. I'm the generation growing up with Shake It Up, that was my show, I love Shake It Up. Bella Thorne and I have a mutual friend, but we've never met or done anything. To think that we were in the same room, doing the same show and she just got unmasked literally the week before I did is crazy. I feel like I should reach out today.

Who's your favorite to win and who do you think is hiding under that mask?

I don't have any guesses. Who I want to win is T-Rex, but I don't think that's gonna happen. Astronaut too, Astronaut was my homie.

What is it like backstage, when you're interacting with people?

It's so weird, because you're like I know this is somebody really cool and someone I know and love but I cannot talk to them or do anything. We're obviously masked, so anytime we see each other is when we're in full costume. Astronaut and I, we'd like give each other high fives, we were hanging out backstage.

Why did you choose Jai Ho and how was it singing with Nicole Scherzinger?

It was really fun singing at the end of the episode. That's one of the coolest things ever. You get to sing Jai Ho with the person who wrote it, that's insane. Nicole's a sweetheart and so encouraging. To sing her song, it was an honor.

What was the most fun aspect of doing this show?

Obviously, the crew. They were incredible. I met so many amazing people. I got to know them and there was some, not drama, but one of the wardrobe people had a crush on one of the producers. I would eavesdrop in on her flirting with him and then talk to them about it after. She gave him a nickname and I started calling him by that nickname and he was like, 'Wait, where did you hear that?' The vibes on set were just so fun.

You brought up the Kardashians on the show and said in another interview you and Kim stay in contact. What is that relationship like and does it surprise you that you have it?

It does, every day it does. She's -- that whole family honestly -- Kim is amazing. Kanye is so sweet. We rehearse at the same place all the time and I see Kanye more than I see Kim. When I'm rehearsing, I see him once or twice a week and he's always so kind. He'll always come in and say hi, or invite me over to his and I'll say hi over there. They're just such good people and it's fun to get to know good people.

How has self-isolation been going for you? We've seen the choreography you've been learning on Instagram.

Of the choreography you've picked up so far, what's been the toughest? Telephone was impressive.

Telephone was pretty hard. I learned Love Game -- I've been doing a lot of Lady Gaga dances -- that was really hard. I think that was the toughest. People have been like, why is your grass blue. Because it's so fun!

Your new home seems like a great place to be for social distancing, with the candy room and 7-11.

It really is. I would rather be here than anywhere else, it's perfect!

What are you looking ahead at once quarantine is over?

The tour will be coming back, we'll be announcing the new dates soon. Everything's rescheduled because the world is flipped upside down right now. The weird thing is, normally everyone has their own struggles, everyone has their own problems they have to deal with. Right now, everyone in the whole world is dealing with this same issue. We're all gonna get through it together, eventually we'll get back to normal, but right now we're on pause for a second.

You said in a Forbes interview you've sold 80 million bows — how wild is that for you to think about?

It's crazy. To think there's then that many bows of mine sold is insane.

It also has to be a nice way to quiet the critics who might not necessarily love the style.

It does. It's really nice, to people who didn't want me to be anything. I'm like, well, I am.