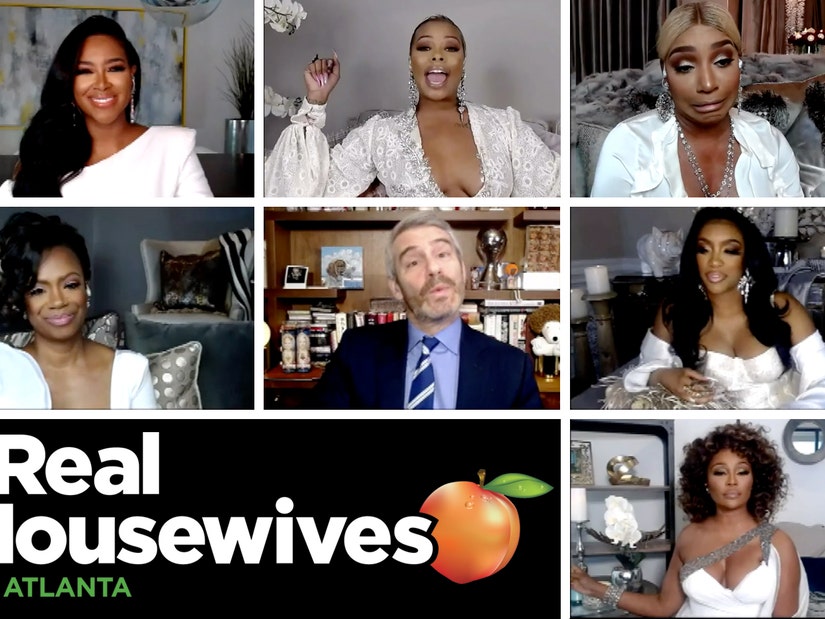 The women all came for NeNe, her comments about Kenya's daughter and her friendship with Wendy Williams.

Thanks to the coronavirus pandemic, this season's "Real Housewives of Atlanta" reunion filmed via video conference -- but even that didn't stop one cast member from doing a virtual version of a walk-off.

Comparing the setup to a "jacked up version of The Brady Bunch" -- dubbed "The Shady Bunch" -- Andy Cohen began the festivities by asking the women how many of them had glam teams despite orders to practice social distancing. While Kandi Burruss said she did both her own hair and makeup, Eva Marcille revealed she only did her hair. The rest of the women were tellingly silent.

From there, it was off to the races, with NeNe Leakes and Kenya Moore getting into it almost immediately. "One minute in and I've been called a bitch, we're ahead of schedule," said Moore as they traded insults. "You'll be called a bitch every time I see you if you f--k with me," Leakes shot back.

The first real fight went down when Andy brought up NeNe's allegation that Kenya didn't use her own egg to have baby Brooklyn. Without hesitation, Eva said the comment was "so disgusting."

Defending herself, Leakes said she was only repeating something she heard, just like the other women do when "they speak out of the side of their neck." She told Eva this wasn't her fight and accused her of only butting in to try and secure a peach going forward.

The two women then started battling over who was more famous. "Nobody cares about you being on a carpet 17 years ago," Leakes shot her way. "I've been on the cover of magazines too and all you can talk about is 'Top Model' and that was the last time you were on top. You're a freshman bitch. A lot of us are your elders, respect your elders! You were licking bottoms to stay on top."

Leakes kept screaming into the screen, so Cohen put her on mute. That gave Kenya the perfect opportunity to say, "this is why people accuse Nene of being bipolar."

As NeNe was unmuted, she started coming for Kenya, but Moore kept the insults coming. "You over there looking like a white woman in drag," she told her, "I don't know if I'm looking at the Real Housewives reunion or a scene from 'White Chicks.'"

In the middle of all the squabbling, Porsha Williams also made a comment about Eva we just have to highlight: "Them titties is aged hens. They social distancing." So, there's that.

Kenya then showed off her marriage certificate, on camera, to dispute NeNe's claims her marriage was fake. Speaking of fake relationships, Cynthia Bailey then brought up NeNe insinuating her engagement was faked too to secure her peach.

"What we not gonna do is all you not gonna direct shit to me," Leakes shouted, as all the women focused in on her. "I can easily do this bitch," she said, before shutting off her camera. After her virtual walk-off, Moore cracked, "You know you need to come back, you weren't in the episodes and you need those checks girl!"

When Leakes returned, she then had to defend her relationship with Wendy Williams. The women all wondered how real their friendship was, after Williams -- on her talk show -- said Leakes was an "over there" friend.

"I don't think this is a real friendship. I think they both are not really being genuine and honest with each other," said Porsha. "She doesn't think anything of NeNe."

Kandi then called it a "strategic" friendship on NeNe's behalf. "If anybody else would talk shit about Nene like that, she would have went in. But Wendy is very beneficial as her friend," she explained. "[Wendy's] on a major platform, she can feed her information and show favoritism to Nene. It's easy to see why she doesn't want that friendship to go totally under the bridge."

NeNe said she and Wendy were in a "neutral place" friendship wise, claimed she didn't "need" Wendy and refused to discuss the relationship more "amongst these girls."

Leakes continued to be in the hot seat as the women laughed over NeNe and Porsha appearing the bury the hatchet and cry over their reunion during the season. Kenya claimed she had receipts to prove Leakes was plotting against her so-called friend, saying NeNe called her and Cynthia and asked "What are we gonna do about this?" after Porsha was cast on "Celebrity Apprentice."

Porsha came with her own receipts, claiming she had a text from Kenya plotting against her alleged friend Cynthia -- one which read something along the lines of "she's gonna get your ass ... trust your days are numbered." She wouldn't show the text on the screen, but texted it to both Andy and Cynthia, who will presumably react to it further next week.

In non-NeNe news, Eva was put on the spot for referring to both Kenya and Porsha as "nappy. headed little girls." Defending her language, Eva said she's a "black woman and one cannot tell me how to speak about the culture I am in."

"You being a light skinned woman with straight hair, light eyes, it's difficult for a woman like me, that is brown like me, that has textured hair like me, to accept that as not being offensive.," said Moore. "I think you just have to be more sensitive to making remarks like that."

Moore also gave everyone an update on her relationship status with estranged husband Marc Daly. She said the two were "working on" their marriage and have been doing Zoom therapy sessions in quarantine, as he's in NYC.

"Marc has made a complete 360," she said. "He just seems like he's fighting for his family, which is all I ever wanted him to do."

Andy wondered if him seeing "what an asshole he was" on the show had something to do with his change of behavior, Moore said "maybe that's partially why." When Cohen added he was "sad" to see how Marc spoke to her throughout the season, Kenya said she's not a fighter when it comes to her family.

"If things happen and I don't like it, I'd address it after the camera stopped rolling," she said. Crying, she added she's not "combative" with people she loves and saves that side of her for those she just doesn't care as much about.

The "Real Housewives from Atlanta" reunion will continue next Sunday on Bravo.