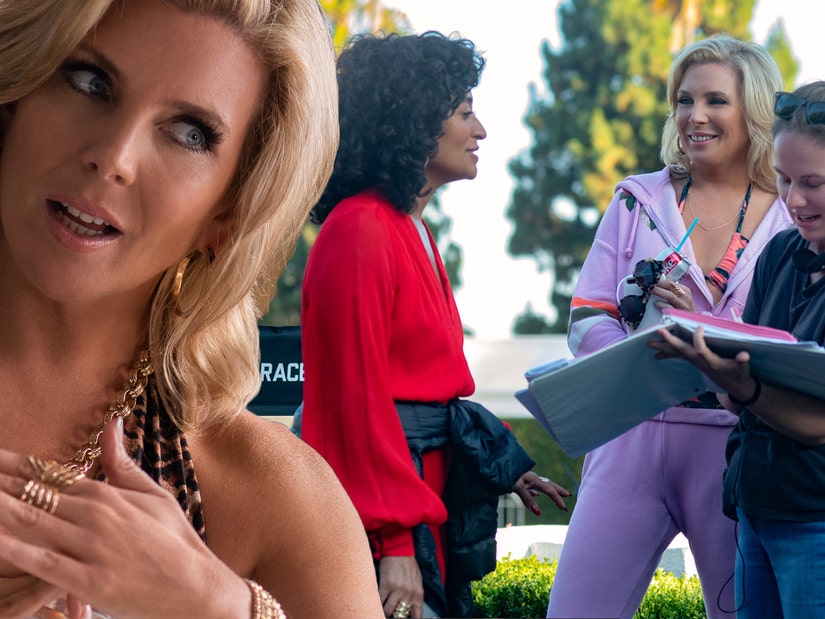 "I've never had to convince a director before that I shouldn't be wearing pants," jokes the actress.

While Tracee Ellis Ross rocks the hell out of some chic designer looks as diva Grace Davis in "The High Note," costar June Diane Raphael had something very different in mind for Grace's under-motivated house manager, Gail.

The "Grace & Frankie" star steals every scene she's in as the pop star's longtime-companion and live-in hanger-on -- a role Raphael fully embraced from head to toe.

"I remember [Director Nisha Ganatra] and I's conversation around the look and I said, 'I think she should always be wearing a bathing suit. She should always be ... she should rarely wear pants,'" Raphael told TooFab. "I had such a great time with the director and I was like, 'Nisha, I've never had to convince a director before that I shouldn't be wearing pants. Asking you, begging you.' I thought it was really important she had a face full of makeup and no pants on."

Once the look was settled, Raphael said Gail was an easy character to drop into.

"I think in general, I'm drawn to demented women and Gail to me was an opportunity to explore that, this totally demented strange lady," she explained.

"What I talked to Nisha about early on was being around so many A-list people in my life and work in Los Angeles and starting to see these teams of people and support around them and their posses and some of them make sense and some of them were like, who are you and why are you here?" she continued. "You realize, some of these people are here because they've simply always been here and nobody is questioning them."

Ganatra has called the role "oddly radical" -- as men are usually depicted as the "lazy" ones in film, while the women prop them up or help them reach their potential. Having watched a lot of movies with her kids in lockdown recently, it's a trope Raphael herself has started noticing as well and one she's proud to break.

"That trope of strong female lead is wonderful and it's not that that's not important, but I really believe we truly limit women in not exploring all that we can be -- sad, lazy as hell, silly, goofy," she explained. "There's a much broader scope. Sometimes I think when we talk about representation, we're only comfortable with the most positive female characters and the truth is that we're deeply flawed and that's great, that's okay. Showing the true scope of our humanity, that's how we represent or how I believe that's how we should represent women."

"The High Note" will be available on demand beginning Friday, May 29. See more from our interview with June -- as she talks costars Tracee Ellis Ross and Dakota Johnson, as well as her How Did This Get Made podcast -- below.

Have you ever had to deal with a hanger-on or assistant like Gail in the past?

I've never had to deal with one on my own. I have an amazing assistant right now who would dance circles around Gail. I think I've been Gail because I started out my career -- while I was still pursuing my acting career -- working in jobs where I did not care at all. I worked at restaurants where, if I got an audition the next day, I'd literally just walk out of the shift. Don't hire actors to do anything else but act, because we have zero loyalty to anything but our craft! I was definitely not a great employee I think, because I was so focused on my career path. That's the part of Gail I totally understand, she's doing the bare minimum.

You said they don't really make movies like this anymore, can you talk a little about what you meant by that?

There's a feeling to it and there's that joy that you walk out with and I also think it takes its time to explore this relationship that's really fresh in general and you just walk out feeling really good. Right now, that's a wonderful gift to offer people. There's a feeling to the movie, a quality to it I don't see that much of anymore and I'm excited about it.

The music also helps in that department, the songs are great and Tracee's voice is amazing. Were you surprised -- not that we should be, considering her family -- that she could sing?

I remember we were in the hair and makeup trailer and they had recorded some of her stuff ahead of time and someone put it on. I was like like, 'Who's this?' They're like, 'That's Tracee.' I was blown away. And the music's great in the movie. I was stunned by it too. I also know Tracee's sister Chudney, she works at The Jane Club with us and she leads our children's programming. One day she was doing one of her incredible Books & Cookies classes and she started singing. I went, 'Oh, wow, Chudney has an amazing voice, that's weird.' Then I was like, oh actually, it's not.

[Tracee's] a star. I'm always impressed when I work on a movie or a TV show and you see the star, the number one on the call sheet also taking on the responsibility of setting and modeling for the rest of the actors and crew an incredibly positive and energetic and warm and just exciting energy on set. It's always great to see. She just comes in like a ball of light.

You also have some great scenes in this with Dakota. Not sure if you know this, but she has a huge online following. What's something her fans would be interested in hearing about her?

Dakota and I had such a good time together and she was somebody who's just so supportive of finding interesting things in the scene, improvising and opening things up so that we could surprise each other. It was really fun, the scene by the pool I think was the first day we met but we just got into it so quickly. She brings such a reality to the role and there's something so beautiful about their pairing together and their energies together that I think just works.

You have this coming out, you've been doing press, you started a book club, you did the Grace and Frankie table read and you're still releasing new episodes of How Did This Get Made. Have those been good distractions for you right now?

No option, no choice. It's definitely been challenging and I think so much of what's gone on right now has really highlighted how caretakers are undervalued in our country. I'm definitely struggling with lack of childcare and just trying to make this all happen but I know I'm also really privileged to be able to shelter at home and know I can keep my family safe and financially secure right now, so I don't take that lightly.

I've honestly gotten so much joy and purpose out of continuing to work on The Jane Club [her co-working space for women with childcare and community support]. We closed our physical locations, but we launched this incredible online community. So much of my work there has been offering this to others when I founded it, but right now I've actually gotten so much out of it and I've needed the resources so much that it's been very cool. It's a lot of work and organization, but it's also something I really needed myself.

How has it been recording How Did This Get Made like at home and, in general, what is the selection process like for picking the films?

I will be totally honest, [husband Paul Scheer] does all of the curation along with our producers on the show. Sometimes I think people don't believe me when I say I know nothing about these movies. The "Cool World" episode, my shock at what was happening in that film was very real. I had not seen a photo, I had not seen a poster, I was so stunned. I really walk into it like, "What time are we watching the movie? 7pm, we're recording at 9, got it." I know nothing ahead of time. [Costar Jason Mantzoukas] chimes in about certain selections, we have a lot of listeners nominate movies. I certainly have nothing to do with it. I'm pretty much a participant in this podcast under duress, but it's really fun to record. It's been fun, it's so great to see everyone.

My big fear is that people might think that we, or at least I'll speak for myself, consider myself a movie critic. I'm not, I love movies so much and I also know how much hard work and blood, sweat and tears go into making them. I really hope people listen to the podcast with that in mind, that I am a movie lover and I would never want to hurt anyone's feelings and there is a joy and a love from where we're coming from, ultimately, even though it's also fun to go into the craziness of it all.