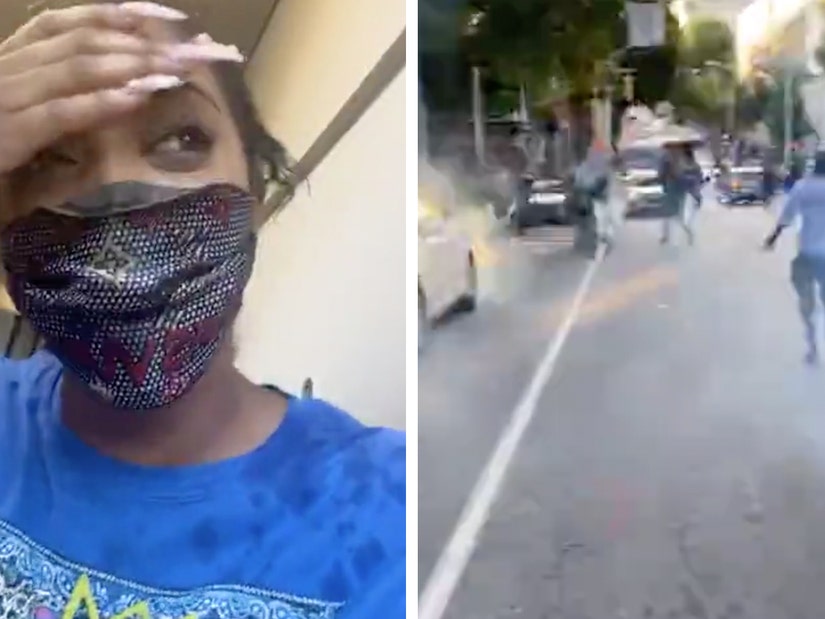 "A very peaceful group of us protesters had pepper spray bombs thrown at us!"

"Real Housewives of Atlanta" star Porsha Williams was in the middle of an Instagram Live on Monday, when she made a run for it as police started using flash bangs and tear gas during a protest.

In the video -- which Porsha later shared to her main feed -- Williams was looking into the camera about to speak about demonstrations in Atlanta, before shots could be heard and everyone around her started running.

"They're shooting us. It's bombs," Williams exclaimed, as she too began to sprint. Clearly affected by tear gas, Williams could be heard getting help from someone with milk to clean her eyes out.

After a while, she can be heard telling others, "I'm good, I'm good" -- before turning the camera back on herself.

"Do y'all see this? We in Atlanta, 7:45, the curfew is not until 9:00," she explained. "We out here peacefully protesting and they tear gassed us for no reason at all. For absolutely no reason at all. Nobody did anything."

She then said she was being blocked in by police and was starting to feel "very unsafe by my own police department."

In a post after going live, Williams reiterated what happened during the protest, calling it an attempt to "try to silence the people."

"SMH -What a shame to try to silence the people once again," she added, along with a string of hashtags: #Frontlines #Legacy #BlackLivesMatter #VoteVoteVote #Fight4ABetterFuture

Protests have been raging across the country since last week over the killing of George Floyd, a 46-year-old Black man, who died after a white police officer kneeled on his neck for several minutes in Minneapolis, Minnesota.