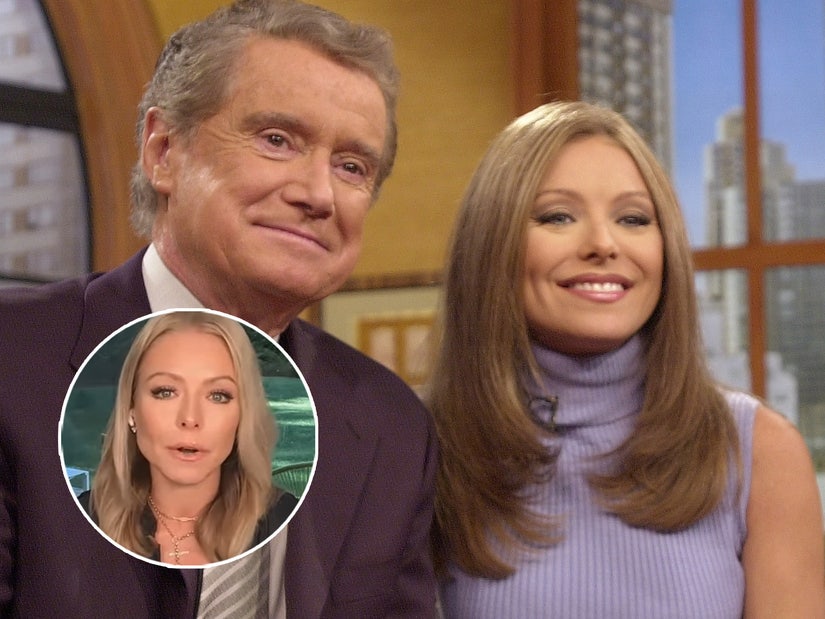 Ripa honored her late cohost and celebrated his relationship with her own children.

"Live with Kelly and Ryan" dedicated its show on Monday to the late, great Regis Philbin, following the host's death over the weekend.

Both Kelly Ripa, who cohosted "Live" alongside Regis for 10 years after Kathie Lee Gifford's exit, and Ryan Seacrest paid tribute to the TV "legend" at the top of the show this morning.

Regis died on Saturday, just one month shy of his 89th birthday.

"Mark [Consuelos] and I were lucky enough to have all of our children with us this past weekend on Saturday. We were all together when we heard this horrible news," said Ripa. "As people get older, you always know that certain things are inevitable and passing away is one of those things, but Regis is one of the people that we all believed, I think, would somehow figure out a way around the inevitable. It was not in the cards, I suppose."

While she said a lot of people had been reaching out to her saying she was the "first person" they thought of when he died, Ripa herself had his family -- wife Joy and daughters Joanna and J.J. -- in her thoughts.

"And then I thought of Kathie Lee," she added. "Those are Regis' core four, his girls, the ladies he had this incredible partnership with."

Noting she was around the same age as Philbin's daughters, she said the women would always talk about "what it's like to have a funny dad" -- and, after his death, she "immediately thought of them and what it must feel like to know that somehow he couldn't find the way to live forever, like we all assumed or thought he would or should or somehow God would give a special ticket for him."

Kelly said her kids -- Michael, 23, Lola, 19, and Joaquin, 17-- didn't believe the news when they first heard he passed, saying there was an "overwhelming sense of dread" as they wondered, "could this possibly be true."

"What I love to remember about him was his relationship with my kids," she continued. "He would talk to kids like they were adults, he didn't care if they were 2 or they were 4. My kids responded to that in a way that was so, they just worshipped him."

Recalling one time Philbin babysat the three children for a bit for the show, she pointed out how wonderful he was with Lola in particular. "I realized what it must be like to have been one of his daughters," she said, "because there was this softness to him when he spoke to Lola that was ..."

Ripa found herself speechless, as she trailed off.

She then went on to compare Seacrest to Philbin, recalling what it was like when Ryan hosted a Disney parade with the two of them long before he became Kelly's cohost.

"We always looked at you Ryan ... they don't make them like Regis anymore and then here comes Ryan Seacrest and Regis is like, 'That kid has it. He's got it. It's that thing you don't see anymore. Just the work ethic and the storytelling ability,'" she said, getting emotional again.

Seacrest said he didn't initially believe the news when he first heard it over the weekend either and just hoped it wasn't true. "For a minute, I convinced myself it was just a rumor," he added, "and then I saw it on the news."

He concluded, "There are just so very few people who are so iconic and so good at what they did and that is Regis Philbin."