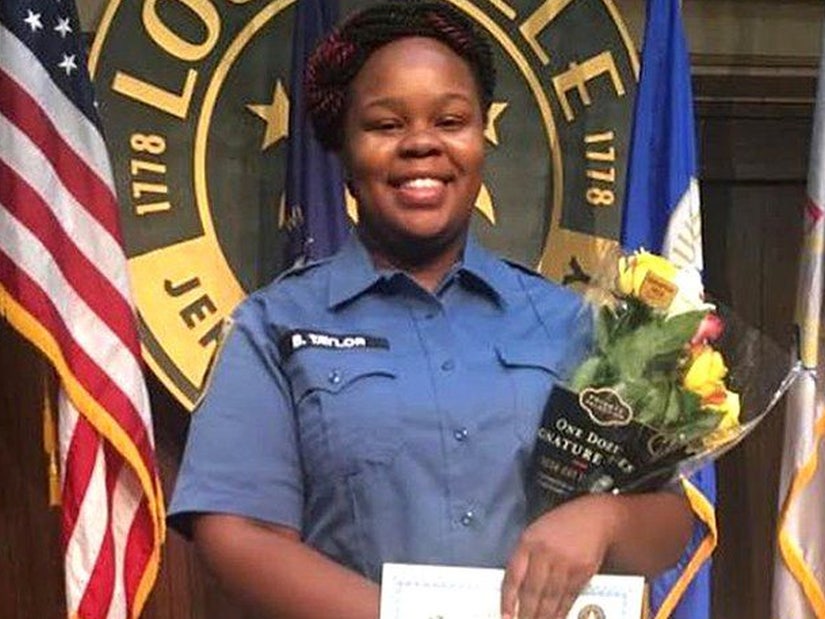 No officers were charged with killing Breonna Taylor.

The results of a grand jury probe into the death of Breonna Taylor have been announced.

Former Louisville Metro Police Department officer Brett Hankison has been charged with three counts of wanton endangerment in the first degree -- for firing into neighboring apartments the night Taylor was killed.

No charges were announced for Sgt. Jonathan Mattingly or Detective Myles Cosgrove, the other two officers involved -- and the grand jury didn't move forward with any charges against all three of them for their role in Taylor's death.

He had already been fired for his role in the shooting, terminated for actions which "displayed an extreme indifference to the value of human life" when he "wantonly and blindly fired ten rounds" from outside Taylor's apartment. During a press conference, attorney general Daniel Cameron said none of Hankison's bullets struck the victim.

Taylor, a 26-year-old Black EMT, was fatally shot by police in her own home in Louisville, Kentucky on March 13 -- while officers were executing a warrant as part of a drug investigation. While it was initially reported to be a "no knock" warrant, on Wednesday, Cameron said that wasn't the case.

Taylor's ex-boyfriend Jamarcus Glover was the main subject of the investigation. The warrant authorized a search on Taylor's apartment, where no drugs were found. Her family has maintained she played no role in the alleged drug trade.

Police say they knocked on the door, announced themselves and were met with gunfire upon entering the apartment, citing Breonna's boyfriend as the instigator. Taylor's boyfriend, Kenneth Walker III, said police broke into the apartment unannounced, with Walker III firing at them in self-defense. None of the police were wearing body cams.

Sgt. Jonathan Mattingly and Myles Cosgrove were previously placed on administrative reassignment. Cameron said they were justified in their use of force.

Louisville mayor Greg Fischer preemptively declared a state of emergency "due to the potential for civil unrest" ahead of the announcement.

Breonna's killing became a focal point of the nationwide Black Lives Matter protests against police brutality and racial injustice in the wake of George Floyd's death, who died after a white police officer kneeled on his neck for several minutes in Minneapolis, Minnesota.

After the grand jury announcement was made, celebrities, politicians and other media figures all shared their outrage on social media:

That’s what we’re calling killing a a person as the sleep now?! #JusticeForBreonnaTaylor

No. Officers. Charged. In. The. Killing. Of. #BreonnaTaylor.

One. Was. Charged. For. Endangering. But. NOT. Killing. Her. Neighbors. #MakeMeWannaHollerAndThrowUpBothMyHands. https://t.co/1khlfDlBv7

Daniel Cameron is on Donald Trump’s short list as replacement of #RGB on the Supreme Court. The same man who decided to not charge the officers responsible for killing #BreonnaTaylor. Vote.

"To be a Negro in this country and to be relatively conscious is to be in a state of rage almost all of the time." James Baldwin. #BreonnaTaylor pic.twitter.com/CUcRcEsXCE

What is most insulting is that the recommended charges aren't even in response to the MURDER of Breonna Taylor, but to the POTENTIAL injury of other people in the apartment.....

'No knock warrants' feels analogous to the experience of being Black in America ... The unsolicited intrusion of racism and violence dealt with on a daily basis ...

The state of Kentucky deemed the lives of Breonna Taylor’s neighbors to be worth more than her own. Let that sink in.

This is shameful. They murdered her in her own home.

BREONNA TAYLOR. She deserves better. She should be alive. Bare minimum. But since she isn’t- I’m praying for her family. Praying for #LouisvilleKy

wow. this is America.

Brett Hankison is indicted for shooting into the apartment NEXT to Breonna Taylor & not for KILLING HER.

He's fired for shooting into BREONNA TAYLOR'S apartment & not for KILLING HER.

This is systemic racism.

Property is worth more than a Black woman. https://t.co/abVLkTqg1s pic.twitter.com/CwflSjR42h

Maybe without murdering an innocent woman/first responder in her own home? Maybe? https://t.co/uGX6FRUSAh

"The charges..said Hankison 'wantonly shot a gun' into 3(!!) apartments..grand jury did not find that Hankison wantonly fired into Taylor's apt...

No charges for killing her. Change the laws! https://t.co/BOgYtW6WcP

Once again, the law says that property is more valuable than Black life.

We cannot let up in our fight for justice for Breonna Taylor and every Black and brown person murdered at the hands of police. We will fight to end qualified immunity. https://t.co/JeHOP3GEVG

No one was charged for the death of Breonna Taylor. Knock it off with the headlines that suggest otherwise.

They never get it right and that doesn't make it hurt any less. Breonna Taylor should still be with us and her family deserved justice today. Tired of this shit.

“Black Lives Matter” exists because of days like today. Breonna Taylor should still be alive.

Daniel Cameron just called Breonna Taylor’s death “part of a national story.” No, man. Her death is a robbery. Those officers robbed her of her life. They robbed her family and her boyfriend of their loved one. They robbed Louisville of a first responder. Who elected this man?

Apparently, no one killed Breonna Taylor. She simply died in a “tragedy.” Like she had a hard fall or got hit by a bus. This apparently is the law in thr State of Kentucky, according to @kyoag Cameron.

#BreonnaTaylor was murdered in her own home on March 13th. She was murdered by three people who swore to serve and protect her. Today is September 23nd. One man was charged with "Wanton Endangerment" and the other two still walk free.

Brett Hankinson, one of Breonna Taylor’s murderers, was NOT charged with murder, but with wanton endangerment. This crime is punishable with up to five years in prison. That’s one year for each bullet fired into her sleeping body. NOT GOOD ENOUGH. #JusticeForBreonna

Praying for Breonna’s mother and family. Because they knew and loved her before her name became a hashtag.

Black Lives Matter. Breonna Taylor’s life mattered. What has been announced in Kentucky is not even remotely in the realm of anything that even begins to approach true justice for her murder. #BlackLivesMatter #BreonnaTaylorWasMurdered

I can’t talk about Breonna right now. I literally cannot. I will actually have a mental breakdown.

HOW?!?! How was shooting #BreonnaTaylor justified?? The woman was asleep!!! This is America. 😢

infuriating. no justice, no peace.

join me in supporting protesters demanding justice for Breonna Taylor by donating to the Louisville Community Bail Fund: https://t.co/7YP10lSKrM https://t.co/ArsRef5zZK

Please pray for Breonna Taylor’s family and send them strength.

This is so fucking fucked up. #JusticeForBreonnaTaylor

Wanton endangerment is a very strange way to spell murder

This is fucked up. Justice for the DEATH of Breonna Taylor! https://t.co/aqFL3ydhPW

Justice has not been served. So we’ll keep standing up and fighting for #BreonnaTaylor. Keep saying her name. pic.twitter.com/0PawdfjsqB