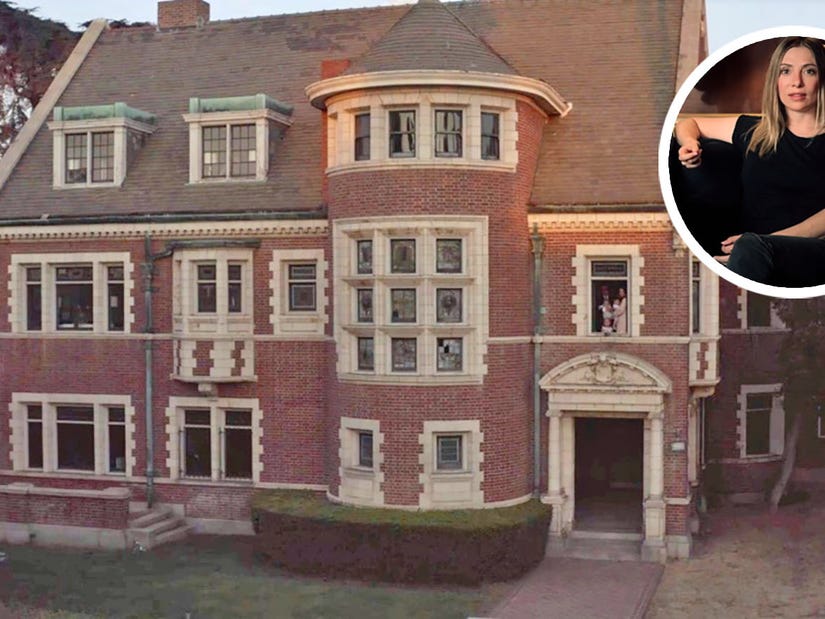 "I know they did an exorcism here ... but I know that it didn't work."

While the Rubber Man or freaky Infantata may not be roaming the walls of the home used for "American Horror Story: Murder House," its real-life residents claim there's still plenty to be spooked about while living on the property.

And this weekend, they're opening up its doors to the public for the first time -- giving a few lucky fans the chance to sleep in the basement of a house they insist is very much haunted off-screen, too.

Angela Oakenfold and husband Dr. Ernst von Schwarz picked up the Los Angeles home -- called Rosenheim Mansion -- in 2015, a few years after it had made its debut on AHS. At the time, they knew nothing about the show and had no idea it had become a tourist attraction for its fans. They actually sued the former owner and their realtor in 2018, but in the years since have slowly come around to its status as a pop culture landmark. 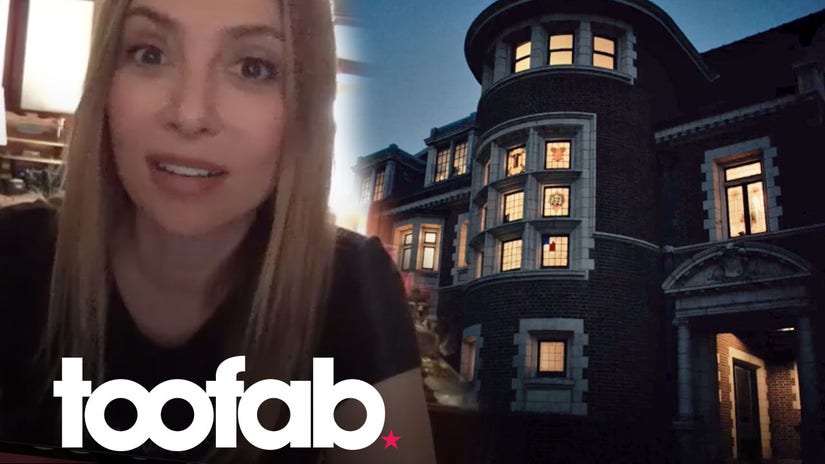 With a livestream event kicking off Thursday night and lasting all Halloween weekend, TooFab caught up with Oakenfold, who filled us in on all the freaky happenings they've witnessed since moving in -- from ghosts in the halls to satanic rituals in their yard.

"This is a dream house," Oakenfold remembered thinking when she first saw the property in person. "I've never seen a house like it before, it was just stunning."

But she and her husband were first tipped off something was amiss with the home after the previous owner sent them an e-mail reading, "The only thing that will be left are the ghosts" when they moved out.

Then, on their first night sleeping in the nearly-empty house, they both "just jumped out of bed" at 1AM, after hearing "this huge banging in the room below us."

"It was almost as if the ceiling had just fallen in and then there was this really strange like dragging noise, and it was so loud," she explained. "It just woke us both up instantly. And we're looking at each other, 'What was it?'"

The same thing happened two more times that night, so they called the police.

"There was helicopters here and cops came in and went through the entire house. They couldn't find anything," she said. "They said all the doors and windows were closed and locked." 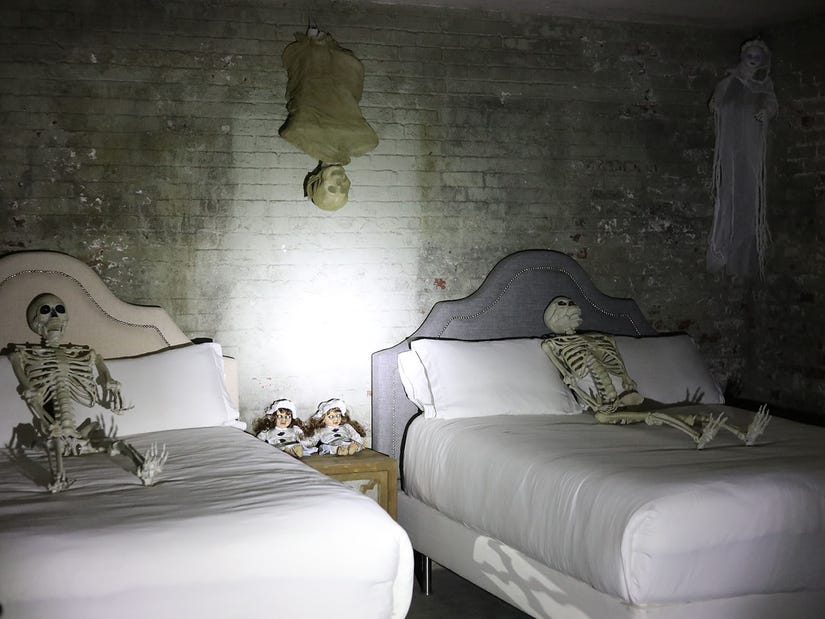 The Basement, set up for the live stream sleepover

The odd happenings continued when workers began to set up some of their utilities in the basement. One claimed something had touched him while he was working and said he got a "strange feeling down there." Another person, said Angela, "came running up and is like, 'It's evil down there. I can't work.'" She added, "And I'm just like, c'mon, I just want like an alarm and I want my cable TV, what's the deal?"

Oakenfold's husband had his own run-in with an apparition, saying he too was tapped on the shoulder. He told her, "It just floated in front of me. It wasn't like anything evil. It was just like a shadow, like a mist and he said it was a female and after about five seconds it just sort of evaporated."

Other visitors have heard marching or the sound of a young girl "crying in grief," while others have seen an apparition of a butler on the staircase -- something the daughter of the previous owner also saw.

Because of their uninvited guests, the family doesn't live in the house full-time.

"I just had twins and we've got a 3 year old. When my toddler was looking up at things and babbling away and talking to things that were invisible, I was like, maybe this isn't the best environment for babies," she explained. "We're not here full time, but we love it here, this is our dream home, it still is, even with the ghosts and people breaking in trying to get into the house." 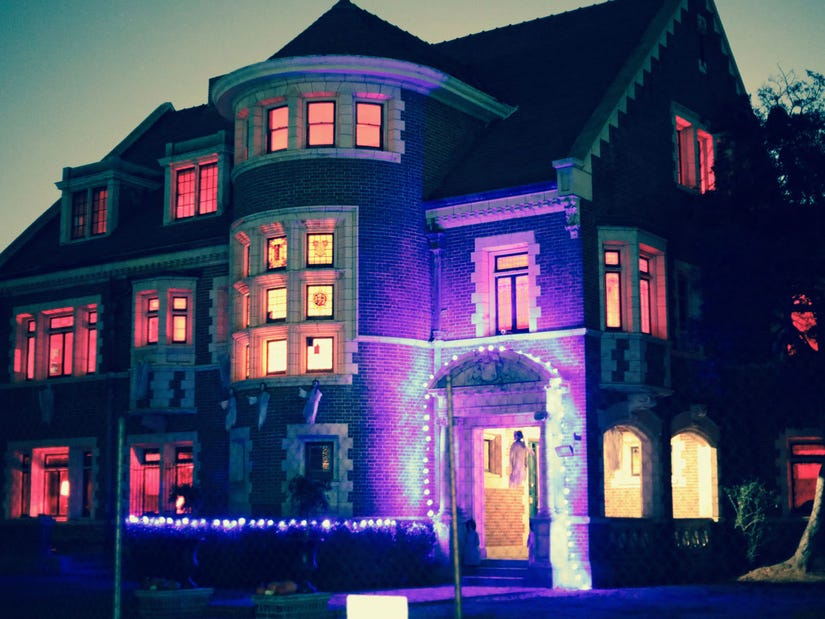 Oakenfold herself hasn't had anything pop out at her and believes, for her family at least, the house does have good vibes.

"I don't feel like anything is trying to kill us or do us harm," she added. "In fact, we moved in and I got pregnant and we'd been trying and then work was going good, we were happy. I didn't feel like there was a need to cleanse it. Whatever was here was like a nun energy that was being supported, but that's just what we've sensed. Other people have come into the house and run."

Regarding that "nun energy," before the previous owner lived there, the home was a convent. Oakenfold said that when it was converted from a private house to a nunnery, a priest did an exorcism.

"The owner that built it for himself and his wife, he fled, and then there was a wealthy guy that bought the house and he rented it out to different actors and celebrities in the 1920s and '30s, but we don't know why, he just donated it to the Catholic church," she claimed. "Maybe he felt there was some vibe and thought it would be better in the hands of the church. I know they did an exorcism here, but I know that it didn't work."

While the home has been a hot spot for fans, they've been mostly respectful for the family. There are, of course, outliers.

"People are curious, they want to see inside. The fans that take pictures, they're all really sweet and polite. There's just a tiny, tiny number who have an obsession with the occult and satanic stuff," said Oakenfold. "So we had a satanic ritual someone did in the front garden. I woke up and a hole had been burnt and there was all stuff in it. Or people trying to break in, or climbing over the fence."

While the family has since put up a fence -- one she admits is "ugly" -- Oakenfold hopes the livestream event this weekend will whet the appetites of the show's biggest fans. She said she and her husband have also come around a bit to the house's status as a tourist attraction and decided to lean into it this Halloween to support the Baby2Baby. A portion of proceeds from ticket sales will be donated to the charity.

"We thought maybe if the fans get to see a little bit of what the house looks like from the inside, maybe they won't want to break in," she added. "Maybe it's time to accept the situation a little bit, open the doors up and see if we can raise some money for charity. It's been really hard work, pulling it all together."

Making it more difficult -- the haunted happenings even scared off one of the crew members for the event!

"We filmed a little trailer here and the sound man was meant to come back for this live stream to catch all of our audio and the director said he won't come back, the last time he was here he went home and brought something with him," she claimed. "He was like, he went to bed that night and there was something on the end of his bed and he couldn't get it to move out of his bedroom ... so his friend came over with his dog and the dog started going berserk and they had to get some sage and clear out the apartment, so he doesn't want to come back."

FX, however, has been brave enough to return. After the first season, "American Horror Story" returned to the home for episodes of "Hotel" and "Apocalypse" -- with the owners reluctant permission.

They were initially hesitant to have the show back, with FX saying they could simply film the new scenes on a sound stage and use exterior shots from the first season. But after the network said Lady Gaga would be filming there as The Countess, that was all Oakenfold needed to hear to agree.

The live stream kicks off tonight, Thursday October 29, with a few lucky ticket-holders getting the chance to sleep there overnight and participate in either a seance or paranormal investigation -- which everyone else can watch from the comfort of their own home.

For more information on the event, check out the official website here. 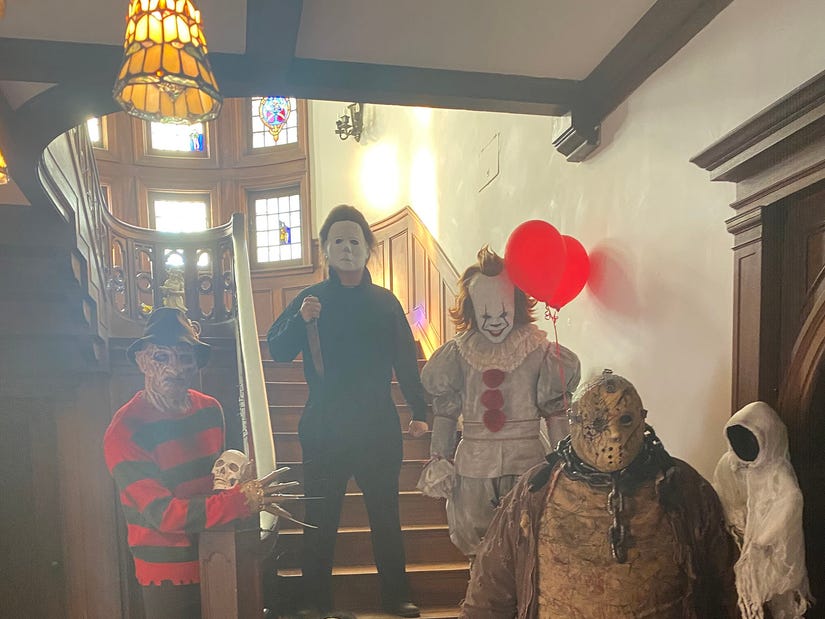 A few visitors before the live stream event