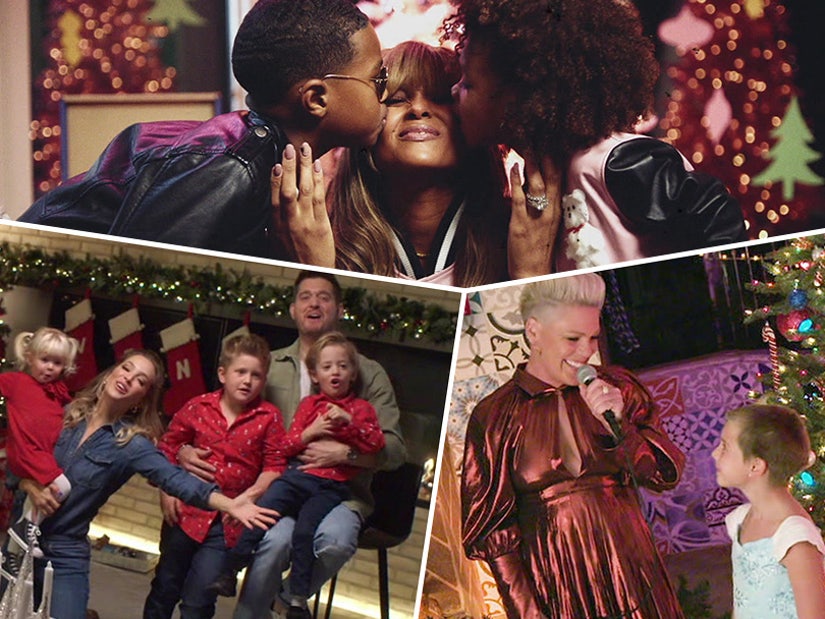 We probably should have anticipated that a Disney show would be all about the kids, but it was still a delicious surprise and treat when the real stars of "The Disney Holiday Singalong" proved to be the junior version of our favorite celebs.

While the ABC special featured performances from the likes of Katy Perry, BTS, Chloe x Halle, Julianne Hough, Kerry Washington, Leslie Odom Jr., Andrew Bocelli and Adam Lambert, it was the screen moments that P!nk, Ciara and Michael Bublé shared with their children that stole our hearts.

We should have anticipated this happening, as we're still in mourning that Jimmy Fallon took "The Tonight Show" back to his studio and has been denying us quality time with his two precocious daughters. Our nights haven't been the same since.

At least we got some of that same reckless abandon and joy during Bublé's performance, as his three youngsters (Elias, Noah and Vida) were seen dancing along to his performance and ringing in holiday cheer before joining him for the final line of "It's Beginning to Look at Lot Like Christmas."

Ciara's two children, Future and Sienna, helped introduce and kick off their mom's performance of "Rockin' Around the Christmas Tree" -- and it was absolutely joyous chaos! They then joined her for the video presentation, with Future even stepping in to help film his mama's performance.

But the real show-stopper for many fans had to be when P!nk's nine-year-old daughter Willow joined her mother for a stunning performance of "The Christmas Song." This girl has vibrato, power, control -- she definitely picked up her mother's natural gift for singing!

She also sported a similar short hairstyle, though Willow went even more shorn than her mother, while bringing Cinderella to life. And as she sang, you could see the joy and pride in her mother's face, sharing the stage and such a special moment with her daughter.

Other highlights from the show included the return of Derek Hough and girlfriend Hayley Erbert to the network after a stunning dance performance on "Dancing with the Stars" just a couple of months ago.

This time, they paired up to dance to a medley of Christmas classics, though we're not sure why they didn't perform in accompaniment to Julianne Hough taking on "Whistle While You Work" (because it's Disney, we guess) and "Let It Snow." It could have been a family affair!

BTS brought the Christmas cheer for their legions of fans by dancing the night away to "Santa Claus Is Comin' to Town," while Katy Perry continued showing off what must be a truly massive collection of fully body costumes.

This time she came out as a literal Christmas tree to perform "I'll Be Home for Christmas" and "Cozy Little Christmas." Elsewhere in the show, Disney on Broadway brought "Let It Go" to life, while Andrea Bocelli soared on "Silent Night."

You can check out some of those performances (and more as they become available) below: