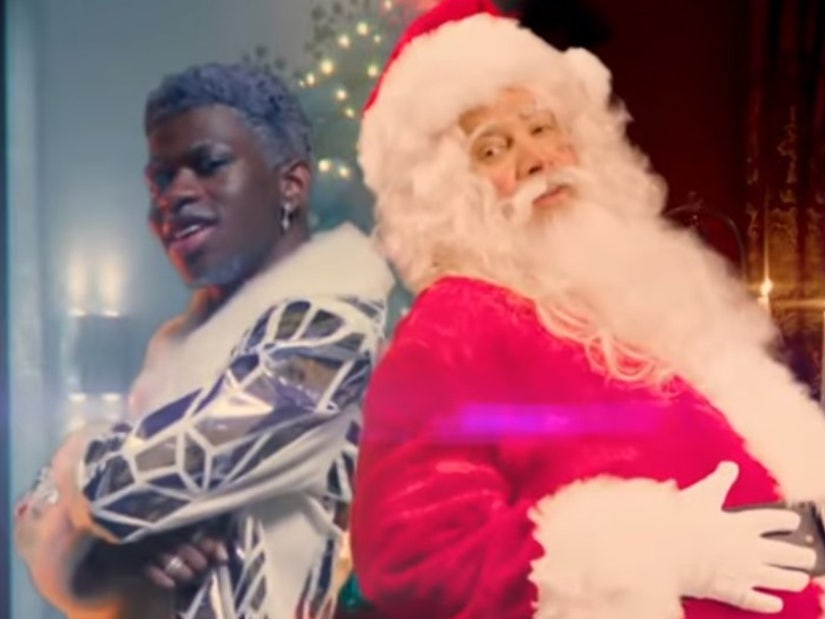 "F--k your stocking stuffing, nobody's getting nothing," raps Lil Nas X as Fallon's horrified Santa regrets ever agreeing to this duet.

Hot off the heels of his own "Holiday" track, Lil Nas X brought his "Naughty" Santa Nas X to "The Tonight Show," where he squared off against Jimmy Fallon's Claus. And it got nasty in a hurry!

With his traditional charm, suit, rosy cheeks and inclination toward things like eggnog, cookies and milk, Fallon was the traditional jolly old elf generations of children look forward to getting a visit from on Christmas Eve.

And then there was Santa Nas X, rocking a killer silver-and-white suit, plenty of bling, and a new grill. While they rapped effortlessly back and forth, they couldn't have been on more different pages. They couldn't even agree on whether they were talking "ho, ho, ho" or "hoes."

While uncomfortable and regretting ever agreeing to the duet, Fallon's Santa didn't lose his cool until Santa Nas X rapped, ""F--k your stocking stuffing, nobody's getting nothing."

"This isn't what Christmas is all about," he said as wholesome chimes started ringing. "Christmas is about presents under the tree and Rudolph and gingerbread men. It's about tradition and lights and whispering what you want when you sit on my lap."

It almost looked like he might have made a believer out of his grinch-y counterpart -- at least until that last line.

"Oh you nasty, huh?" asked Santa Nas X, before kicking it back into gear with his own vision for the season.

You can check out his twisted take on the season above, and then join Lil Nas X as a futuristic Santa Claus -- who actually isn't nearly as nasty as the version Fallon had to deal with -- in his "Holiday" video below.