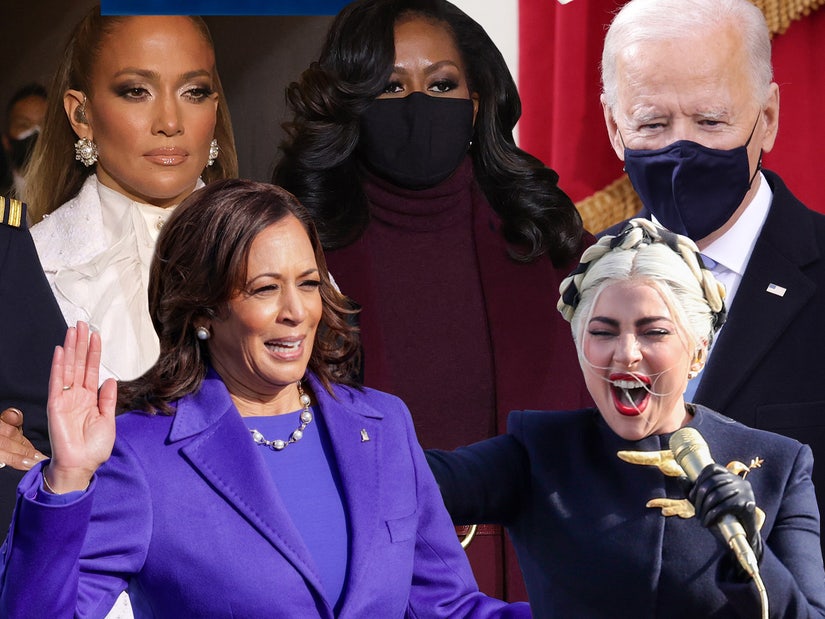 From Kamala Harris making history to J.Lo sneaking "Let's Get Loud" into her performance, here's what had everyone talking.

His inauguration went down today in the U.S. Capitol, where Biden stepped into his role as the 46th President of the United States. Joining him, while making history of her own, was Vice President Kamala Harris -- the first woman, first Black woman and first Asian American woman to hold the position.

The Twitter trends started rolling in as soon as the arrivals did -- as Harris, Michelle Obama and Hillary Clinton all got people talking over what they wore to the event.

Harris donned a purple look from Christopher John Rogers -- with purple being considered a sign of bipartisanship between Democrats (blue) and Republicans (red). Obama stunned in a more raspberry look, wearing a coat and belt from Sergio Hudson -- while Hillary also wore purple, just as she did during her 2016 concession speech.

History being made. All the leading women in purple - Hillary, Michelle, and Kamala. Symbolising bipartisanship and unity. pic.twitter.com/R3gd11YEjO

You can do anything and be anything. 💫

Thank you @kamalaharris My Vice President of the United States of America is a BLACK WOMAN. 👑 https://t.co/k1Ipw3zibz

I've been in here crying all morning and all Michelle Obama did was get her hair done and walk in and that was enough for me! #InaugurationDay

How it started vs How it’s going pic.twitter.com/bIyweF3dz4

SHE WALKED IN LIKE SHE OWNED THE PLACE ! GO HEAD MISS MICHELLE pic.twitter.com/St55gokctA

Hillary Clinton is wearing purple to the #Inauguration2021, an homage to the pantsuit she wore four years ago when she conceded graciously and called for unity. pic.twitter.com/irH08FsVtv

Hillary Clinton said the purple suit she wore when giving her concession speech was the suit she planned to wear to her first trip to Washington as president-elect in a show of bipartisanship and unity #InaugurationDay pic.twitter.com/DQrbMtRj6r

Hillary: I’m gonna do it. I’m finally going to give my speech
Bill: Hillary don’t - pic.twitter.com/wx6KNErAUl

Hillary Clinton is too damn happy 😆 did y’all hear her?!!! #Inauguration2021 pic.twitter.com/xQYZFUc8W1

Someone rockin’ Dior Air Jordan 1s at the #InaugurationDay 👀💧 pic.twitter.com/ofiA2wggX5

Following a few opening remarks, Lady Gaga took to the podium to sing the National Anthem -- delivering it with just as much power as one would expect from the consummate performer. She wore a custom Schiaparelli couture look, with a giant dove pin attached to her chest and her hair done up in a braid. "A dove carrying an olive branch. May we all make peace with each other," she said of her look on Twitter.

"Singing our National Anthem for the  American People is my honor," she also tweeted before the performance. "I will sing during a ceremony, a transition, a moment of change—between POTUS 45 and 46. For me, this has great meaning."

"My intention is to acknowledge our past, be healing for our present, and passionate for a future where we work together lovingly," she added. "I will sing to the hearts of all people who live on this land. Respectfully and kindly, Lady Gaga."

The Star Spangled Banner is a difficult song. It was sung flawlessly by Lady Gaga. With power and grace. Channeling the moment in all its power.

Lady Gaga just gave Best Ever Rendition of our national anthem. Best ever!

lady gaga looking like she ab to announce who will be in the next hunger games pic.twitter.com/4ssvRaZ1SS

When Lady Gaga turned to the flag, I was done in.

When you have to sing at the inauguration at 11 and win the Hunger Games at 12 #InaugurationDay pic.twitter.com/UBiawzcuNH

Nice rendition of the National Anthem by Lady Gaga. No one knelt. We won’t be seeing much of that anymore during a Democrat administration.

Umm I would NOT want to follow @ladygaga yikes Jlo

Harris was then sworn in as Vice President by Justice Sonia Sotomayor, an emotional and historic moment for all of those watching at home.

It's an honor to be your Vice President. pic.twitter.com/iM3BxJzz6E

In tears watching this extraordinary moment for women in the U.S. and the world. Vice President @KamalaHarris 🇺🇸 pic.twitter.com/nwsokkD3cY

Vice President @KamalaHarris, my warmest congratulations! I look forward working with you and the new administration. Finland wants to strenghten our good relations and cooperation even further. Climate, equality and human rights need strong voices.

Congratulations to @KamalaHarris on being sworn-in as @VP. It is a historic occasion. Looking forward to interacting with her to make India-USA relations more robust. The India-USA partnership is beneficial for our planet.

Watching Sotomayor administer the oath to Harris undid me. Do you know how rare it is to see women, and women alone, portrayed as patriots, as leaders, as shapers of America's history for as long as America existed. The Bechdel test of democracy and we finally effing passed.

I’m running out of tissues. 😭

Vice President Kamala Harris and Supreme Court Justice Sonia Sotomayor have earned our admiration and shown us that in America, anything is possible. We are not there yet, but we continue to move toward a more perfect union. pic.twitter.com/18kGx9H4H4

Jennifer Lopez was up next, as she hit the stage to sing "America the Beautiful" and "This Land Is My Land" in an all-white Chanel pantsuit and matching coat.

After reciting two lines of the Pledge of Allegiance in Spanish and exclaiming "Justice for All" in Spanish, she snuck a "Let's Get Loud" reference into the end of her performance.

JLo singing LETS GET LOUD??? At a 2021 presidential inauguration?? pic.twitter.com/nUsFePZkpr

SHE WENT FROM AMERICA THE BEAUTIFUL TO "LETS GET LOOOUUUUDDD" THE AUDACITY!!!! @JLo 😆😆😆😆 lmaaaoooo #Inauguration pic.twitter.com/N8kLHZCmbl

With Dr. Jill Biden by his side, Joe Biden then took his oath of office, administered by Justice Roberts. After that, Amy Klobuchar officially introduced Biden as 46th President of the United States for the first time, to a standing ovation.

He gave a speech saying "the will of the people has been heard," adding, "we've learned again democracy is precious, democracy is fragile and democracy has prevailed."

"As we look ahead, restless, bold, optimistic and set our sights on a nation we know we can be and we must be, I thank my predecessors of both parties for their presence here today," he continued. "I know the resilience of our constitution and the strength of our nation."

"The American story depends not on any one of us, not on some of us, but on all of us," he added. "We the people who seek a more perfect union. This is a great nation, we're good people and over the centuries with storm and strife, peace and war, we've come so far, but we still have far to go."

Saying there was much to repair, restore, heal and gain, Biden said there's never been a "more challenging or difficult" time than the one we're in now, thanks to Covid, racial injustice and a surge in domestic terrorism and white supremacy. He was hopeful, however, for change and unity and once again pledged to be president for "all Americans" -- even those who did not support him.

I just can’t say it enough. Thank god for Joe Biden. Thank god. He was needed for this very speech.

One thing about Joe Biden, he’s going to give you A SPEECH!#InaugurationDay

Joe Biden is a plain speaking man & this speech seems true to his heart and character: it’s decent, generous, hopeful, down to earth. I’m shaken — what a relief to hear a president get up there & be truthful with us. I’ve been so desperate for honesty and facts and calm decency.

This is a great speech, the best I've ever heard Biden.

Biden delivering a classic Biden speech. We can work hard enough, we can work together and there is nothing we can’t do. He believes that and we must as a nation get behind him

Biden is not messing around in this speech.

Garth Brooks followed Biden's speech, giving an a cappella performance of "Amazing Grace" and asking those watching the inauguration in person and at home to sing along.

garth brooks: everyone sing along! 😃
everyone at the inauguration and at home: pic.twitter.com/ZULNY3gYwy

You can go ahead and inject Garth Brooks singing acapella "Amazing Grace" and asking us to sing with him directly into my veins.

OMG #GarthBrooks CRUSHED IT. Everyone in my house singing along, and of course @RayaYarbrough doing a perfect harmony. What a cathartic rush of relief and joy. 🥺😭❤️

When Garth Brooks asks you to sing along. pic.twitter.com/gkfRYpWFt3

Among the last to speak at the event was 22-year-old Amanda Gorman, the National Youth Poet Laureate and youngest person in history to read a poem at an inauguration. Her powerful and emotional speech was followed by a reading from Rev. Silvester Beaman of Bethel AME Church in Wilmington, Delaware -- a longtime friend of the Biden family.

‘There is always light, if only we are brave enough to see it.’ - Amanda Gorman

Amanda Gorman is slaying. And is this the first time we’ve seen braids on the inaugural stage? How beautiful it is.

It should go without saying that Poet Laureate Amanda Gorman is ... pic.twitter.com/2CcF9hPSHC

Ok...Gaga, JLo and Chris Gaines had me worried...but they saved the best for last. This is the WHOLE show. Amanda Gorman spoke to my heart. Thank you. pic.twitter.com/F9GZ56Yq6h

If you were wondering why teaching the arts in schools is important, Amanda Gorman healing the nation with this poem should put that to bed.