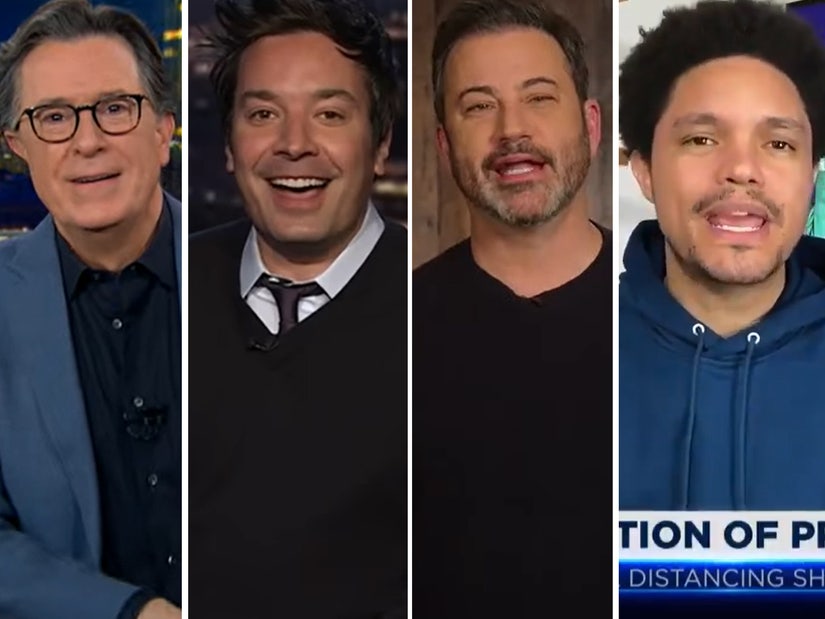 The hosts all took aim at Bernie Sanders, Lady Gaga and the "shiny, new old president."

All of late night breathed a sigh of relief on Wednesday, as the hosts' four-year stint criticizing Donald Trump finally came to an end.

Following President Joe Biden's inauguration, all of the hosts kicked off their shows by celebrating both 46's arrival and the exit of 45. Throughout their monologues, they also poked fun at some of the more viral moments of the day -- including Lady Gaga's giant dove pin and Bernie Sanders' now-infamous mittens.

Kimmel kicked off the show with a New Year's Eve countdown to Trump's exit.

"I imagine this is what it feels like when an oncologist calls and tells you the tumor is benign," he added. "It really was special. Watching the Obamas, Clintons, Bushes and Bidens all walked through that door to welcome a new president to the White House, it was like when all the Avengers came back to beat Thanos."

He also took aim at Trump's new home at Mar-a-Lago, saying he had dinner there once and compared it to a "gaudy rest home."

"Nothing goes on, nothing happens," he added. "[Trump] won't make it a week in there. He'll be calling into Hannity by Friday night, guaranteed."

Jimmy Fallon was happy to finally have a president "who knows not to stare directly at the sun." He then asked, "Anyone else feel like they just lost 280 pounds?"

"What a day for America," he exclaimed. "It feels like the 4th of July, plus the Super Bowl, plus a little bit of SantaCon."

He also cracked that with Trump out of office, he was "pretty sure we'll never hear Steve Bannon and Lil Wayne in the same sentence again" following their pardons -- and said Kamala Harris was the "first person to be cool while married to a guy named Doug."

He also made a joke about Bernie's appearance, saying it looked like "he's about to scatter bread to a bunch of pigeons at the park."

"You did it, you survived the last four years and your reward, a shiny, new old president," joked Colbert.

"The inauguration was a joyful occasion. Like I do with most happy things, I cried a lot," he admitted. "It was extremely emotional and not entirely in the way I expected. What I feel is enormous relief. I realized just how worried I'd been for our country. It's like we've been on a ship that's been on a storm for four years and we just got on dry land."

Of Joe and Jill's joint appearance at the inauguration, he joked the two held hands "in a way that doesn't feel contractually mandated."

"It’s so nice to have a president with a soul again," he added. The previous one sold his to the devil and didn’t even get Georgia out of the deal."

He also joked the Capitol rioters heard every word of Biden's speech condemning the attacks ... "on the TV in the prison day room."

"What a day. It was fantastic, wasn't it?" began James Corden on his show.

Of the giant family bible Biden was sworn in on, the host joked, "It's not often you see the President of the United States take his oath of office on a prop from the 'Pirates of the Caribbean' movies."

He also took aim at Sanders, saying, "Here's the thing, Bernie 100% would have worn that to his own inauguration. I like an adult that would wear mittens with that sort of confidence. He looks like he's there to watch his grandson's youth soccer game and he's not happy about it."

Biden, Trump, pomp, pardons, and the wildest transfer of power to date. pic.twitter.com/GE904Q7y0M

Trevor Noah also celebrated on his show, saying that on Inauguration Day, "the sun was shining, the birds were singing, and McDonald's share price in Florida went way up, because America got a new Dad."

"Despite the pandemic, this inauguration had it all," he said, before calling out some of the more viral moments. "Former presidents, the youngest inaugural poet, an amazing singer wearing her own Etsy store [Lady Gaga], an old man on his way to the post office [Sanders], and even a lady whose outfit just called me a broke bitch [Michelle Obama]."

He also poked fun at Trump's parting remarks, in which he told his supporters to "have a good life."

"That's not what a departing president is supposed to say," said Noah. "That's what you tell your best friend in high school when she starts dating your ex."

Last, but certainly not least, was Seth Meyers -- who had to take a moment to get used to saying Trump's new title.

"That's right, Donald Trump is no longer President of the United States and look this won't solve all our problems but it will remove a big one," he continued. "If you're addicted to heroin, gambling and prostitutes and you only quit heroin, thats still a huge step."

He also joked about Biden's age, saying the inauguration was "the moment he's been working for my entire life."

For more, check out his deep dive into Biden's first day below.