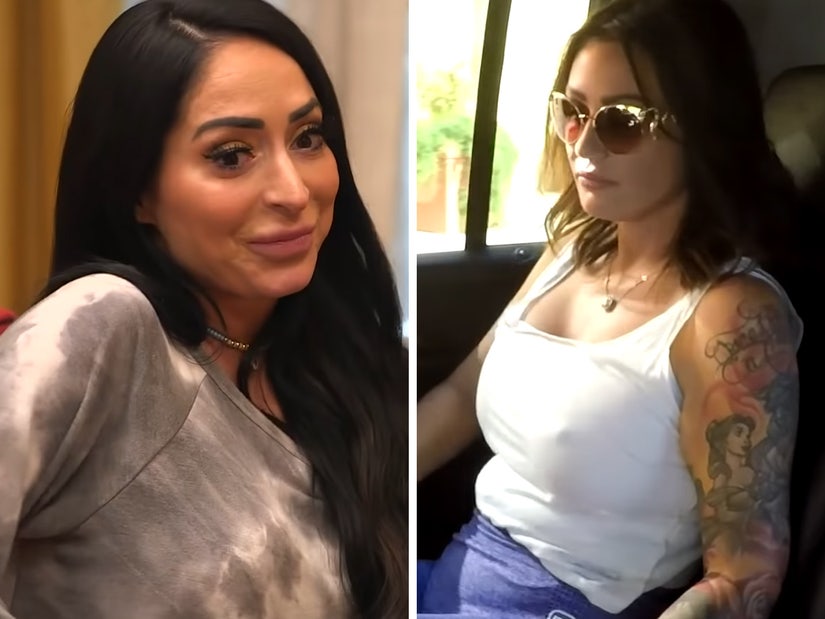 "Anger and emotions are running high," said The Situation.

Tensions rise between the "Jersey Shore" family as Jenni "JWoww" Farley and Angelina Pivarnick prepare to face each other for the first time in 10 months.

In an exclusive sneak peek at Thursday's new episode of "Jersey Shore Family Vacation," Vinny Guadagnino, Mike "The Situation" Sorrentino, Pauly D and Ronnie Ortiz-Magro agree to meet JWoww in their hotel lobby before the two ladies meet, as Angelina expresses her doubts about the reunion.

"I need God with me today because honestly I wanted to sit down with her, but now I'm like having second thoughts because I don't trust the girl," she says in a confessional.

ICYMI, JWoww and Angelina are still at odds after JWoww, Snooki and Deena Nicole Cortese were booed for giving a bridesmaid speech at Angelina's wedding that trashed Staten Island, brought up Angelina's previous failed engagements and called her "the fly to our s---." Angelina would go on to say the trio "ruined her night."

As the guys head down to the lobby, Angelina, Lauren and Nikki set out for the pool.

"We're about to meet with Jenni before anything and just get a temperature check to see where her head is at," says Pauly D.

At the hotel pool, Lauren asks Angelina, "When the time is right, would you be willing to be like, you know, I am sorry for my part in it. Like, I don't want to continue this any longer."

Back in the lobby, The Situation begins telling the guys what he plans to say to JWoww.

In a confessional, he adds, "The whole squad is gearing up for war. JWoww is about to arrive. Anger and emotions are running high. I don't know."

The clip ends as JWoww pulls up in her limousine, explaining how she feels about the impending get-together.