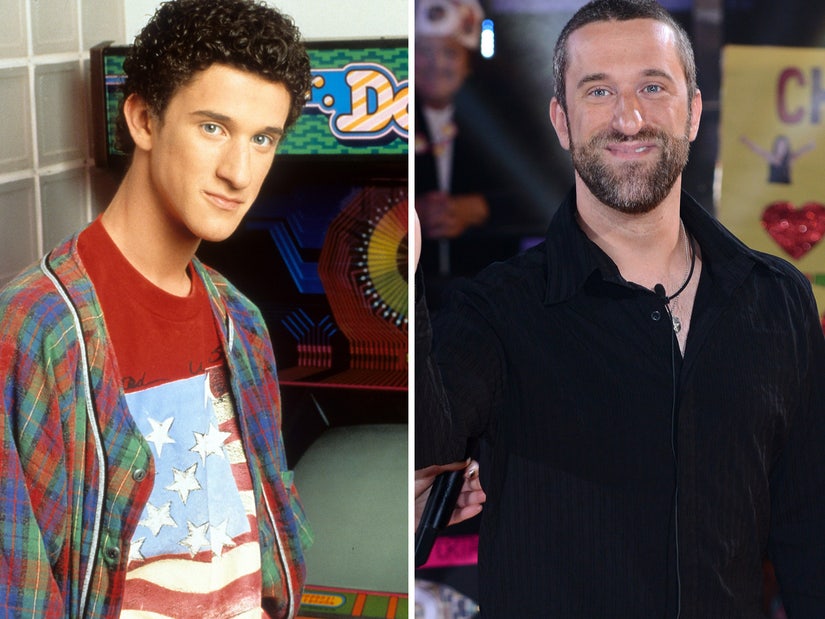 Mario Lopez and Tiffani Thiessen were among the first to honor their late costar.

Dustin Diamond, most well known for his work as Screech Powers on '90s sitcom "Saved by the Bell," is dead. He was 44.

According to TMZ, the actor died on Monday morning -- just a couple weeks after completing his first round of chemotherapy for stage four lung cancer. Diamond was initially hospitalized earlier this month. His health reportedly continued to decline over the past week.

"He was diagnosed with this brutal, relentless form of malignant cancer only three weeks ago," his rep said in a statement. "In that time, it managed to spread rapidly throughout his system; the only mercy it exhibited was its sharp and swift execution. Dustin did not suffer. He did not have to lie submerged in pain. For that, we are grateful."

Costar Mario Lopez shared a tribute to Instagram after his death, writing, "Dustin, you will be missed my man. The fragility of this life is something never to be taken for granted. Prayers for your family will continue on..."

He also paid tribute to Diamond on "Access Hollywood" later in the day, telling viewers, "It is with a heavy heart that I announce my friend and Saved by the Bell costar passed away this morning." He added, "He was like a little brother to me and we always remained in contact over the years. I actually spoke with him a couple weeks ago after he got his diagnosis. Even then, he was full of energy and he was optimistic. Life is just so fragile and not to be taken for granted. Our prayers are with Dustin's family and his friends."

Tiffani Thiessen shared a tribute to her Instagram page, adding, "I am deeply saddened by I the news of my old co-star @realdustindiamond passing. Life is extremely fragile and it's something we should never take for granted. God speed Dustin."

Mark-Paul Gosselaar tweeted out his tribute, writing, "Deeply saddened to hear of the passing of Dustin Diamond, a true comedic genius. My sincere condolences to his family and friends. Looking back at our time working together, I will miss those raw, brilliant sparks that only he was able to produce. A pie in your face, my comrade."

Tori Spelling, who also appeared on "Saved by the Bell" as Screech's love interest Violet, posted a lengthy tribute to Instagram.

"My 1st onscreen love Dustin Diamond got his Angel wings today," she wrote. "Before there was David and Donna there was Screech and Violet. Dustin was my first on-screen kiss. He welcomed me with open arms onto the set of Saved By the Bell. As one can imagine being the newbie on a hit show was overwhelming for a 14-year-old girl. He not only showed me around but made sure I was always ok. Such a young gentleman. He was kind, smart, and always making everyone laugh. He was a great scene partner. He was a really good guy. I’m sad after the show we never had much contact aside from occasionally running into each other at events. I’m glad he’s out of pain. He’s an icon to me professionally and personally. RIP Samuel love, your Violet."

Courtney Stodden, who appeared on "Celebrity Big Brother" with Diamond, posted a photo of the two of them from the show. She captioned the image, "Oh lord. #rip Dustin. I’m shocked. I remember all of the times we were there for each other on set of #cbb like captured in this photo. You were talking me out of feeling sorry for myself. You were a sensitive yet strong soul. I’m so sorry 😢 #dustindiamond."

RIP #Screech @dustindiamond I will miss your random texts/videos of the most hilarious jokes and your absolute love for all things music. Sad that we never got to jam together. Hope you get to keep playing music up in Heaven.

We are saddened by the tragic loss of actor and @sagaftra member Dustin Diamond, best known for his much loved character ‘Screech’ on the hit ‘90s sitcom ‘Saved by the Bell.’ Our condolences to his family, friends and fans. https://t.co/ncTkzp7a11

Diamond got his big break playing Samuel "Screech" Powers on "Good Morning, Miss Bliss" from 1988-1989. That show became "Saved by the Bell," on which he starred from 1989-1993, before starring on both "The College Years" and "The New Class."

Diamond and Mr. Belding actor Dennis Haskins were the only original cast members who didn't appear on the most recent "Saved by the Bell" revival on Peacock. His character was explained away as being on the international space station with his robot friend, Kevin. When asked about Diamond on a recent "Watch What Happens Live" appearance, Elizabeth Berkley said she hadn't spoken with him "in a long time" and didn't believe they'd talked "since we finished the show." Fans were hopeful, however, he'd appear in the already-announced second season.

Following his time on all the "Saved by the Bell" series, Diamond released his own sex tape (which he later claimed was filmed with the use of a stunt double) and shared sordid stories from the sitcom's set in a tell-all book he later claimed were fabricated by a ghost writer. He also did a number of reality TV appearances, including "Celebrity Boxing 2," "Celebrity Big Brother," "Celebrity Fit Club" and "Hulk Hogan's Celebrity Championship Wrestling."

Off screen, Diamond was convicted of carrying a concealed weapon and disorderly conduct following a 2014 bar fight. He served jail time in 2016, before a probation violation landed him behind bars again just a month later. He had kept a low profile since.

"We want the public to understand that he was not intentionally malevolent. He -- much like the rest of those who act out and behave poorly -- had undergone a great deal of turmoil and heartache," he rep said in a press release following his death. "His actions, though rebuke-able, stemmed from loss and the lack of knowledge on how to process that pain properly. In actuality, Dustin was a humorous and high-spirited individual whose greatest passion was to make others laugh. He was able to sense and feel other peoples’ emotions to such a length that he was able to feel them too—a strength and a flaw, all in one."

"Dustin Diamond was a character in and of himself: an unpredictable spitfire who always left us shocked, but never left us bored," the statement continued. "We are thankful he trusted us enough to share his genuine, authentic self with our team. We wish you knew him in the way that we did. We please ask that you give room for privacy to our team and Mr. Diamond’s family during this tragic time, as we grieve and remember the memories spent together. This loss is as much stinging as it is sudden."