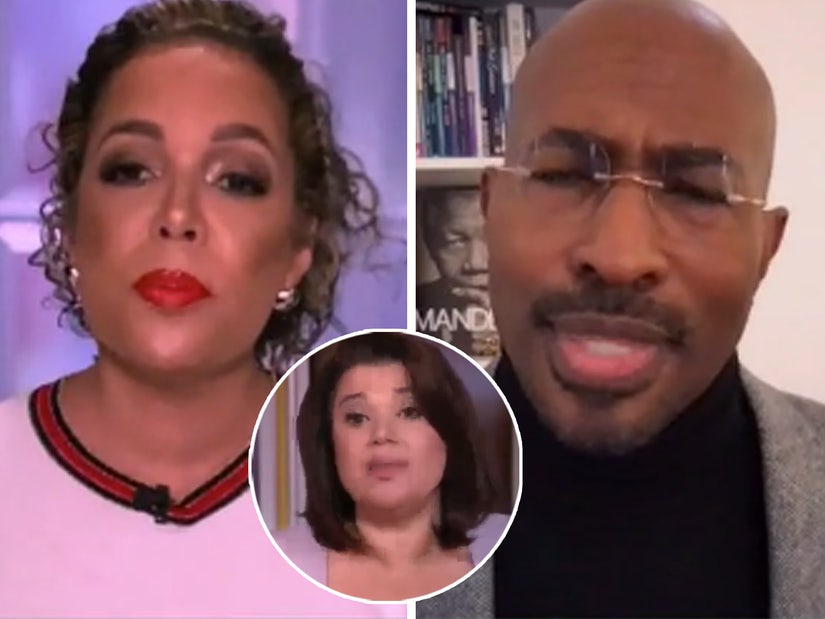 Van Jones was all fired up on "The View" Friday morning, as he was asked to defend what many have perceived as a flip-flopping stance on Donald Trump.

The CNN commentator appeared on the show to talk about his new documentary with "View" cohost Meghan McCain titled "The Reunited States." According to a press release, the doc aims to highlight "the unsung heroes working to bridge the political and racial divides in the U.S."

“Can we just give the good people a little bit of love and attention? Because I think the awesome people way outnumber the awful people.”@VanJones68 discusses unity between the political parties and reacts to Rep. Marjorie Taylor Greene’s committee removal. pic.twitter.com/QaBgbws86z

Joy Behar kicked off the conversation by saying Jones "might be a cock-eyed optimist" by trying to bridge those gaps, before he explained that he believes the "media" is spending too much time focusing on the "awful people" in both parties, instead of celebrating the "so many awesome people" instead.

"There's so much noise and nonsense and food fight going on that the good people can't even be heard," he said.

"Can we give the good people a little bit of love and attention?" Jones then asked. "I think the awesome people way outnumber the awful people."

.@VanJones68 defends himself against criticism over giving Trump credit for his work in the Black community, despite publicly disapproving other actions by Trump: “I’m never going to apologize for putting the interest of people at the bottom first.” https://t.co/cVclFZQmjA pic.twitter.com/5SDfUVSl4P

Though Sunny Hostin did say Jones does "spend a lot of time threading the middle and trying to unite people," she also asked about those who "accuse you of being a political opportunist -- a chameleon, so to speak -- who provided racial cover for former, disgraced, twice impeached President Trump."

She then read a quote from Jones saying Trump had done "good stuff for the Black community" and that there was a side of Trump that "I think he does not get enough credit for" in the past -- before pointing out the mixed-messages he seemed to send out by crying when Joe Biden was elected and saying "it's easier to be a parent now, character matters."

"People in the Black community don't trust you anymore," she then said as Jones looked shocked. "What is your response?"

"I don't think that that's true," he began, saying his comments were taken out of context. "The entire quote I said was that Trump has done a lot of good stuff he doesn't get credit for, and then I said the reason he doesn't get credit for it is because he's done all this horrific stuff, said all this horrific stuff and it completely erases what he's done."

"What happens is social media will take the clip, but they won't show the whole context," he added.

"My entire life has been about bringing people together to solve tough problems together at the very bottom who don't have anything," he continued, before saying that because he's worked with Republicans -- even in the Trump administration -- he's been able to help get more people out of prison and help the Black vote. He added he was "proud" to work with anyone who could help get even more people "home."

"At a certain point, we gotta stop focusing on rhetoric and focus on results. People may not like everything I've said on television, I try to be balanced, but look at what I have done," he continued. "Who among my critics have been able to get people together to help folks at the bottom? When we fight like this about everything and you can't give anybody even a little bit of credit for anything, who hurts is not the politicians, it's not the pundits, it's regular folks who don't have anything."

The camera then cut to Joy, as the music cue to cut to a commercial began. Behar was caught off-guard and exclaimed, "Oh, you're finished?" before telling viewers Jones would be back after the break.

The conversation continued when the show returned and while McCain shared that she agreed with Jones' approach, Ana Navarro was not having it.

"You've lost a lot of people who trusted you and who saw you as a voice because of the positions you took during Trump," she said, before criticizing him for taking photos with "hurtful" people like Candace Owens.

"Do you not regret that? Do you not see that you're giving her legitimacy?" she asked, "How does that help the issue?"

He said he had no regrets, but Joy had to step in and end the segment. "You're gonna have to take it outside," she added, "Van, take a nap!"