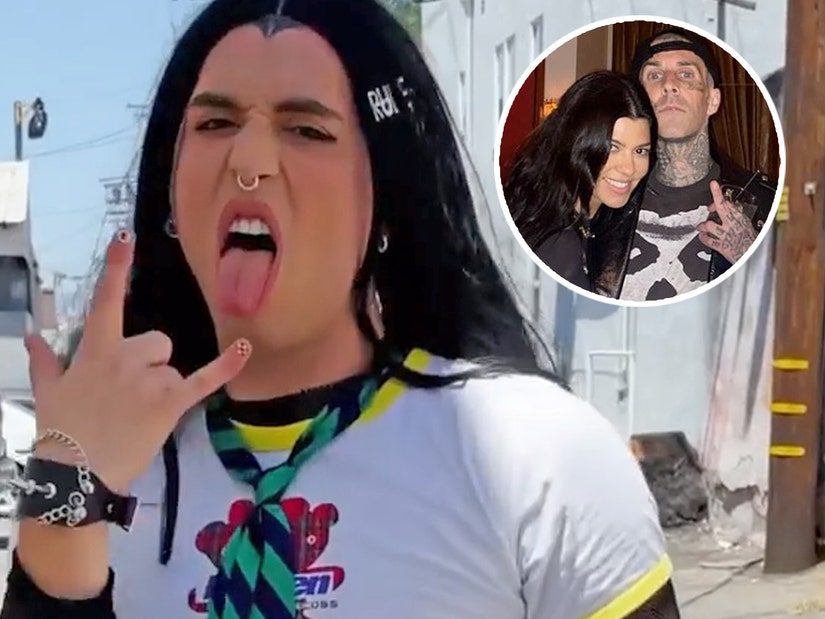 "The Poosh word of the day is anarchy!"

Comedian Benito Skinner -- known as Benny Drama on Instagram -- is praised for his Kardashian impressions and his latest, skewering Kourtney Kardashian's romance with Travis Barker, might just be one of his best yet.

Skinner shared the video to his page on Thursday, captioning the clip, "Kourtney goes punk." In the footage, he rocks a dark Kardashian wig, Hot Topic-friendly clothes, fishnets, nose piercing, leather and studs as he jokes about how her relationship with the Blink-182 drummer has changed her.

Giving the finger and spouting off nonsense like, "I eat boys for breakfast," "Travis, let's go home and play Guitar Hero," "Let's go to Spencers, I wanna steal some s---," "I wanna mosh, Trav" and "Kim, you're just a capitalist bitch!", Skinner's video quickly went viral -- and even caught the eye of both Kourtney and Travis themselves.

In the comments, Kourtney wrote, "It's the widows peak for me" and added the "rock on" emoji. Barker, meanwhile, got a kick out of the "I wanna mosh" line, writing it in the comments along with the "tears of joy" emoji.

Among the other comments were January Jones writing, "Never say Warp tour again," Vanderpump Rules star Katie Maloney adding, "This is the greatest thing I have seen" and Jodie Comer commenting, "Omggg YESSSSSSSS."

While Kourtney clearly got a kick out of the hilarious impersonation, she did take a minor stand against another fan who insinuated her style has changed since she began dating the rocker.

After sharing the photo above -- in which she's pictured waiting for a drink at a bar in torn jeans, stain top and a jacket reminiscent of the one Kate Hudson wore as Penny Lane in "Almost Famous" -- one follower commented, "And her style begins to change."

She responded writing, "This picture is from 2019 but ok."