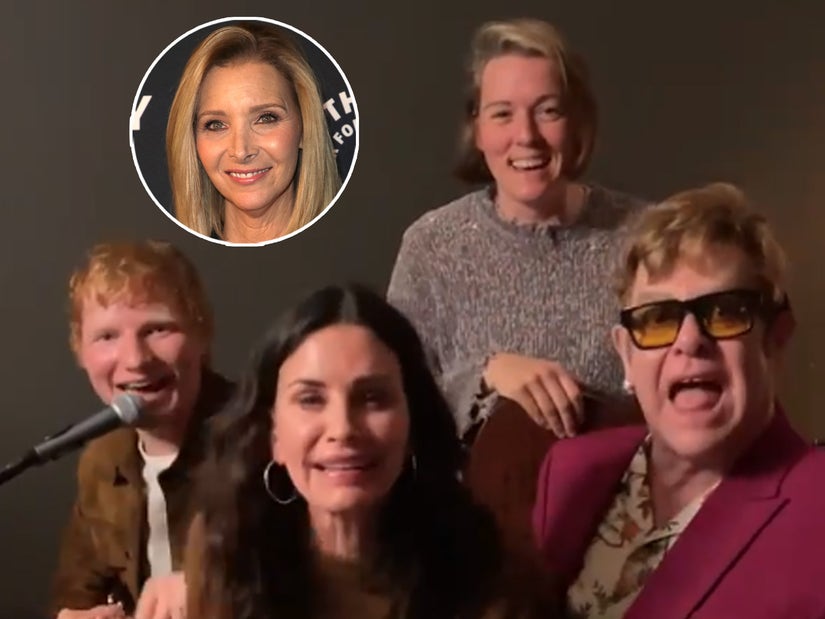 "Whaaaaaat??? That's the most exciting thing ever!!!!" Kudrow said of the performance.

Courteney Cox has shared the most epic tribute to her "Friends" co-star Lisa Kudrow.

Taking to Instagram on Sunday, the actress posted a video of herself performing a very special song alongside Elton John, Ed Sheeran and Brandi Carlile. Cox and the group sang the chorus of Elton's hit "Tiny Dancer." However, they switched the lyrics to "Tony Danza," which, as "Friends" fans know, is a nod to Kudrow's character, Phoebe, who hilariously confused the words on an episode of the NBC sitcom.

During Season 3 Episode 1 of "Friends," Phoebe (Kudrow) tells Rachel (Jennifer Aniston) and Ross (David Schwimmer) that she thinks the "most romantic song ever" is "the one that Elton John wrote for that guy on 'Who's the Boss?'"

"What song is that Pheebs?" Aniston's Rachel asks Kudrow's Phoebe, who then sings, "Hold me close young Tony Danza."

Cox's Instagram video featured Sheeran and Carlile playing guitars, while Cox was on the piano. Everyone, including Elton, joined in on vocals.

"Lisa Kudrow, this is for you," Sheeran said at the start of the clip before the talented group then burst into song.

"One of the greatest moments of my life. This one's for you @lisakudrow," Cox captioned the video, adding the hashtags and tags, "#phoebe #tonydanza #tinydancer @eltonjohn @teddysphotos @brandicarlile 🎥:: @jadeehlers."

Kudrow commented on the video, writing, "Whaaaaaat??? That's the most exciting thing ever!!!!"

In addition to her comment, Kudrow also posted a video in response to the performance, in which she shared her one minor critique.

"OK, Ed Sheeran, Courteney Cox, Brandi Carlile and Elton John, that was the most thrilling thing ever. It was so good," she said. "Technically it's 'Hold me close, Young Tony Danza,' but what you did was great too. And, including the original song that you wrote, Sir Elton, that was really good too."

Cox responded to Kudrow's critique. "Ahahaha! You're right Lisa!!!," she commented on her former co-star's post. "Next time we'll make sure to get the 'young' in there ❤️❤️❤️"

Tony Danza himself reposted the clip on his Instagram profile.

"First 'the routine', now this. You've made my day once again! I'm honored! @courteneycoxofficial @edsheerandouble @eltonjohn @lisakudrow," he captioned the post.

Meanwhile, many other stars also reacted to the epic performance in the comments section of Cox's post.

Cox's post came a week after she shared a video of another amazing performance. Last Sunday, Cox and Sheeran both posted a video of themselves recreating "The Routine" from "Friends." Check it out, here!