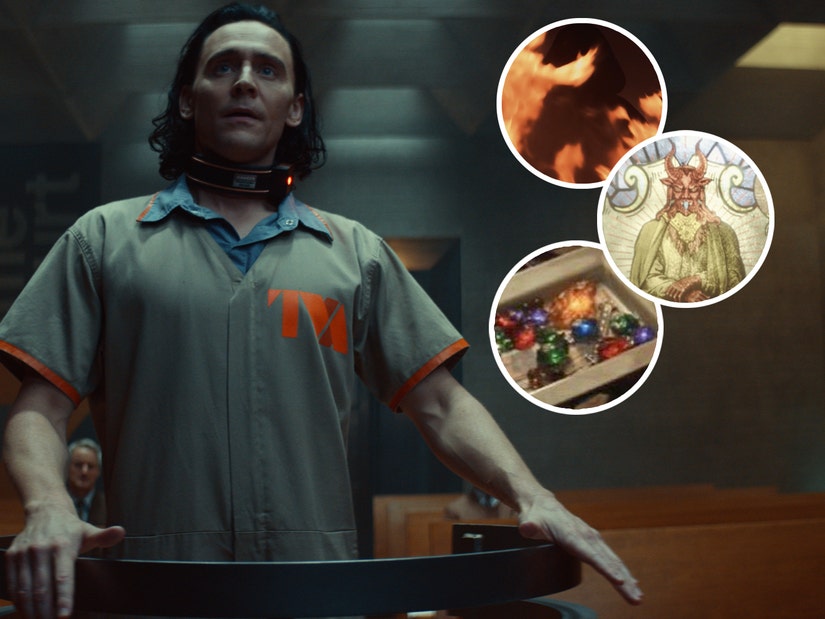 "SO THE AVENGERS DID ALL OF THEIR BEST FOR NOTHING?"

"Loki" premiered overnight on Disney+, plucking the God of Mischief from his past for a new series taking place outside of the MCU timeline as we know it.

The show picks up immediately after the events of "Endgame," which saw the "Avengers"-era Loki (Tom Hiddleston) pick up the Tesseract and vanish as Earth's Mightiest Heroes traveled back in time to stop Thanos. On the show, he winds up in the hands of the Time Variance Authority, who are tasked with keeping the integrity of the "Sacred Timeline" in place and need Loki's help to set things right.

As the series explains, there was a "multiversal war" during which timelines "battled each other for supremacy." A trio of timekeepers reorganized the multiverse into a single timeline, the "Sacred Timeline," and made it the TVA's job to keep anyone who "veers off" that already-set path in check. Those rebel "Variants" have the power to create a Nexus event, which could spark "madness, leading to another multiversal war." Yeah, that wouldn't be great -- but the fact there's a movie called "Doctor Strange In the Multiverse of Madness" coming soon doesn't speak highly of the TVA's chances here.

As Loki tries to figure out what the hell is going on, Owen Wilson's TVA agent Mobius has been doing a bit if time traveling himself -- heading back to a French church in 1549 to a "routine nexus event" that ended in the deaths of multiple agents. We're told this is the sixth attack in the past week and, when asked who did the killing, the lone survivor simply points to a stained glass window of the devil. That, naturally, got fans once again speculating that Mephisto could appear on the series.

#Loki spoilers
-
-
-
-
-
-
-
-
-
not me thinking mephisto was the variant they were looking for pic.twitter.com/lximpjFLjA

As Loki pleaded his case, he said the TVA should be calling the Avengers to trial as "time criminals" for their exploits, an accusation that was explained away by Gugu Mbatha-Raw's Ravonna Renslayer saying, "What they did was supposed to happen. You escaping was not."

Instead of being "reset," Mobius recruits Thor's brother to help him stop the mystery Variant. During an interrogation scene between the two, Mobius tried getting to the heart of who and what Loki is and wants. That seems like it will be a big theme of the show, discovering who Loki is removed from his brother and the Avengers. As Mobius went through a highlight reel of his many escapes over the years, viewers learned Loki was actually D.B. Cooper, the real-life man who highjacked a plane in 1971, picked up $200,000 in ransom and parachuted off the Boeing 727 only never to be seen again. As he told Mobius, Loki did it because he lost a bet to his brother.

SO WHAT YOU’RE TELLING ME IS THAT DB COOPER IS ACTUALLY LOKI OMFG #Loki #LokiWednesdays #LokiSeries pic.twitter.com/5HQXKJ3lC4

#Loki SPOILERS
.
.
.
.
.
.
.
.
.
.
D B COOPER WAS ACTUALLY JUST LOKI BC HE LOST A BET TO THOR HSJSJAHAHAJS THIS IS THE FUNNIEST THING TO EVER HAPPEN pic.twitter.com/UGK1KmSXaM

Another Cooper? Another timeline? Did anyone catch that in #Loki today? 🤔 pic.twitter.com/ZyLwt3Pvmi

The highlight reel took a more serious turn as Mobius showed Loki what his future looked like, showing him his transfer to Asgard, his role in the murder of his mother Frigga, his redemption arc with his brother, Odin's death and his own eventual death at the hands of Thanos. To say this version of Loki was shocked would be an understatement.

Mobius:like you killed your mother

#loki spoilers
-
-
-
-
-
THE WAY LOKI HAD TO WATCH FRIGGA, ODIN AND HIMSELF D WORD WITHIN THE SPAN OF A FEW MINUTES pic.twitter.com/WhpFGefSUp

cw // #Loki spoilers
-
-
-
Loki lingering the most on Frigga’s death and knowing he’s the one he caused it hit so hard. She was the only person besides Thor who truly believed Loki could change and never gave up on him :/ pic.twitter.com/kk10AFF9fD

mobius finding loki after he watched his own death #Loki pic.twitter.com/3uuya0MqKK

the tva agatha
🤝
showing wanda and #loki
the death of their parents pic.twitter.com/BHo5m7jlqc

loki spoilers //
- #loki #LokiWednesdays
-
-
loki: crying over his potential future and death of the ones he loves
me, who thought this series would be more lighthearted and funny: pic.twitter.com/LC9qft1opS

While distracted by another nexus event, Loki escaped the interrogation room and demanded a TVA desk agent give him the Tesseract so he could travel out of there. The agent simply opened a drawer full of Infinity Stones, explaining that they "actually get a lot of those" over the years and some of his coworkers actually use them as paperweights.

The stones are powerless at the TVA, which Loki realizes might actually be "the greatest power in the universe." While the trickster was surprised by the revelation, fans were furious the TVA didn't intervene in the deaths of Black Widow, Iron Man and The Vision or any of the apocalyptic events they've all faced.

the tva and eternals watching the events of infinity war and endgame #Loki pic.twitter.com/g5Cm6lrSBy

#Loki spoilers
.
.
.
.
.
TVA watching Nat, Vision and Tony dying while having a bunch of Infinity Stones in a drawer somewhere, just because it was ✨meant to be✨ pic.twitter.com/GFeiIgxXMZ

#Loki SPOILERS #TVA
.
.
.
.
.
SO THE AVENGERS DID ALL OF THEIR BEST FOR NOTHING? pic.twitter.com/rQU2EZ3AQy

the infinity
stones are
extremely paperweights🤩
powerful and
important pic.twitter.com/Otl4XCxqB0

PAPERWEIGHTS #LOKI this was legit my face! pic.twitter.com/a3rrmWX3a7

the tva while everyone’s sacrificing themselves for the infinity stones
pic.twitter.com/1zCnmRSBu5

#Loki spoilers
.
.
.
.
.
.
Tony, Vision, Gamora and Natasha reactions when they find out that the infinity stones they sacrificed their lives for are being used as “paperweights” by TVA pic.twitter.com/WhQYd4dRZz

#Loki spoilers
-
-
-
The TVA watching the Avengers search for the infinity stones while they have extras just sitting in their desks pic.twitter.com/A2RAmVWdqn

The episode ended with Mobius striking a deal with Loki, revealing that they need his help to track down the dangerous Variant because the Variant they're hunting "is you." In the hour's final moments, a group of TVA Minutemen are ambushed by a mysterious hooded figure who kills them all by engulfing them in fire. Their identity isn't revealed, but with the Mephisto guesses off the table thanks to Mobius confirming they're searching for Loki, fans have only one version of the trickster in mind: Lady Loki.

#loki spoilers
-
-
-
-
-
loki when he meets the other loki variant that’s disrupting the timeline pic.twitter.com/ZpWBiUu9mX

Is this lady Loki? pic.twitter.com/FRrSb1DJ1m

#Loki spoilers
-
-
-
the person in the hood is definitely loki but which version of loki??i feel like it’s definitely lady loki but are they gonna reveal lady loki in episode 2 or not?and it really seems like to twist the story and make lady loki their villain??😭 pic.twitter.com/2QyGETPq24

// #loki spoilers
-
-
-
loki is a gender fluid time variant! this is how we get lady loki and kid loki!! pic.twitter.com/Q5xxFvqiPJ

We'll see if they're right when new episodes of "Loki" drop Wednesdays on Disney+.