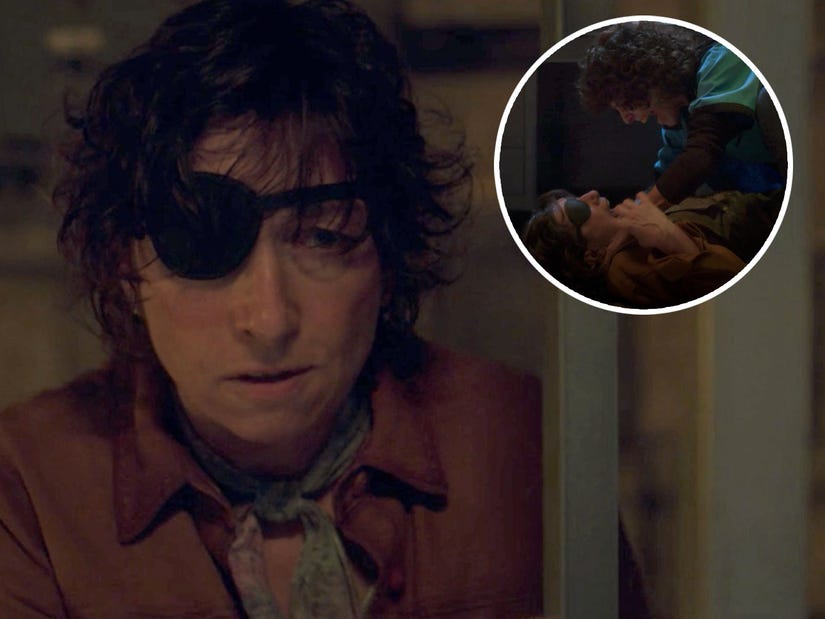 The woman behind Pepper returned to her AHS stomping grounds with bloody results.

Naomi Grossman returned to the fold for the "Drive-In" episode on Wednesday night, marking her first appearance on "Stories" and fourth appearance in the greater "AHS" universe. She's most known starring on both "Asylum" and "Freak Show" as Pepper, a role which involved a three-hour transformation including a prosthetic nose, brow, ears, hands, fake teeth and eye, as well as daily head-shavings.

She finally got to look more like herself while playing Satanist Samantha Crowe on "Apocalypse," before her latest gig on "Stories" as Rabid Ruth. Again, Grossman was recognizable, though her character -- whose eyeball was plucked from her face and eaten during a brutal movie theater massacre in the '70s -- rocked an eye patch.

Though Ruth tried her damndest to warn moviegoers in the present day that what they were about to see would incite another bloodbath, her protests were in vain. In the end, she wound up victim to legendary scream queen Adrienne Barbeau -- and, once again, was covered in prosthetics after getting stabbed in the eye and gutted.

TooFab caught up with Grossman after her appearance, where she revealed she still had to audition for her role, opened up about seeing her brutal death for the first time on screen and which of her AHS roles is her favorite.

Obviously, you're no stranger to the Horror Story universe. How long have you known about American Horror Stories and how did you get involved in Drive-In?

I saw the news whenever it came out -- time has a different meaning now in Covid times -- I'm sure I read it with everyone else whenever the news broke at some point last year.

I didn't know I would be affiliated at all until mid-April, because we shot in early to mid-May. I've been keeping my lips buttoned for a while here.

When they approached you for it, what was the pitch or how was it first explained to you?

Well, I actually, it was an audition. Which, hey, however we make it happen!

Of course, they never make things easy. They gave me kind of dummy sides, they kind of mask the actual story. They don't want all the actors and agents in Hollywood to know what American Horror Story is doing this year, so they changed up some of the crucial details.

Fortunately, I made some mental leaps, so I wasn't too far off. The audition wasn't that far from what we actually ended up coming up with. Rabid Ruth was not the name in the audition. I feel like that was kind of critical. Like, okay, she's rabid, we know that much. As an actor, if you're not gonna take that clue, how can I help you?

How was it for you to work with legendary scream queen Adrienne Barbeau — and have her murder you?

She's tiny. I'm almost big next to her. I kinda was like, I could take this lady. But, hey, not in the script. That was obviously very exciting, she's a total legend.

I know her, if anything -- because I'm kind of a musical theater nerd -- it was everything within me to not flaunt the fact that I was Frenchy in the Jewish Community Center's version of "Grease" in Denver, Colorado in the '80s. Because she played the original Rizzo on Broadway in "Grease," so we had that in common. Somehow I managed to not drop that, I really kept it together.

I saw your Insta post about prosthetics for this, which I'm guessing were for your brutal death. How did it compare to your Pepper makeover?

What you saw on Instagram, that was the face cast they made for the blood spurting out of my eye effect. What they made from that case cast was a prosthetic eye, a mangled eye with a little spigot so blood would spurt out. Obviously, it didn't take nearly the amount of time it took Pepper.

Pepper was like an art form. That took two and a half to three hours and even then, that was after they really perfected it. Those first couple times, those first tests were like 6 hour days. So this wasn't nearly all that, but it was still quite intensive. There was a whole blood-rigging system underneath that, underneath the prosthetic. I'm not gonna lie -- it looked great on camera and that's what mattered -- but it didn't go off without a hitch.

Had we had to do that over and over, like I did Pepper, I'd probably have some notes for the makeup. And don't get me wrong, they're my best friends who I owe everything to for Pepper. But for that reason, I feel like we can have a dialogue and I would say, "Hey, let's make sure my eye is securely shut." It's a process.

Now that you've been able to see the episode, seeing your death, what was that like for you and how did you feel watching it? Especially that shot later, where you're just gutted.

I had no idea what I looked like, because the one eye had a patch on it and the other eye had that prosthetic on it. They had to like lie me down and then dress me. I had no idea I had guts spilling out like that. It looked awesome!

It looked great and that is what I care about, that's all that matters.

Do you think these one-offs are going to play a bigger role going forward in the American Horror Story universe?

I mean, it seems to me why not? If something's working, do it again, do it some more. We saw it with Pepper, we saw it with Murder House with episodes 1 and 2 of Stories. It seems to be that, yeah, let's face it. I would love to see what happened in 1986, the first time "Rabbit Rabbit" was screened. I'd love to see that other eye gouged out. By that point, we'll be able to perfect the prosthetic process!

It seems to me you could treat these all as little mini pilots and see which ones stick and the ones that really hit, turn it into a series. Why not? I suppose. But then again, they're never without horror stories.

The way this one ends, the world is totally screwed.

You've now appeared on four iterations of Horror Story, as three different characters. Which is your favorite … and which would you love to possibly play again?

Obviously, Pepper has a very special place in my heart. Come on, I'd be silly not to toot her. She was the first, you never forget your first. She put me on the map. She just gave and gave and gave. Let's face it, I got a lot of mileage out of that little character.

But at the same time, they did her such justice with that last episode, it's really hard to ... where do you go from there? And maybe you shouldn't, maybe it's perfect the way it is. I don't know. Don't get me wrong, I would just as soon be Betty White-age still doing Pepper. I could do that forever and ever. I don't know if there's story enough for all that.

Earlier this year, Ryan Murphy put out a poll to see what people wanted to see on the show and a lot of fans were clamoring for mermaids at one point. What hasn't the universe tapped into that you'd love to still see?

When Ryan was putting those out, I was definitely retweeting those and leaning towards aliens, because of the Pepper connection. I got a mortgage to pay, let's make that happen, let's see those aliens!

But, hey, as long as I get to be underwater, I am all for mermaids. As far as I'm concerned, I just wanna work. I am behind any and all of those suggestions, so long as they can put a little Pepper in it, a little Rabid Ruth, whatever it is. I can play whatever!

Are there ongoing conversations every now and then about where you could pop up next, or do you just wait and see what happens?

It's mostly the latter. I don't really know how the sausage is made, I just know what I do and I definitely am very active on my social media and I'm in touch with fans and going to comic cons and I know what they say and what they want. I don't know whether that necessarily gets back to the powers that be. When they beg me to come back, they're preaching to the choir. Like, no one wants to make that mortgage more than me, so they're kind of tweeting at the wrong person.

As far as what the powers that be conversations are, I'm not necessarily having those. All I can really do is worry about myself. So I've been, through the pandemic, been working on my own show. A horror show unto its own. It's a one-woman show, which is kind of my thang, called "American Whore Story," autobiographical tales of self-compromise, which Ryan has given me the green light on.

So I think, little by little, by me stoking the fans' fire ... I'm sure it all helps at the end of the day.

The first three episodes of "American Horror Stories" are streaming now on FX on Hulu.