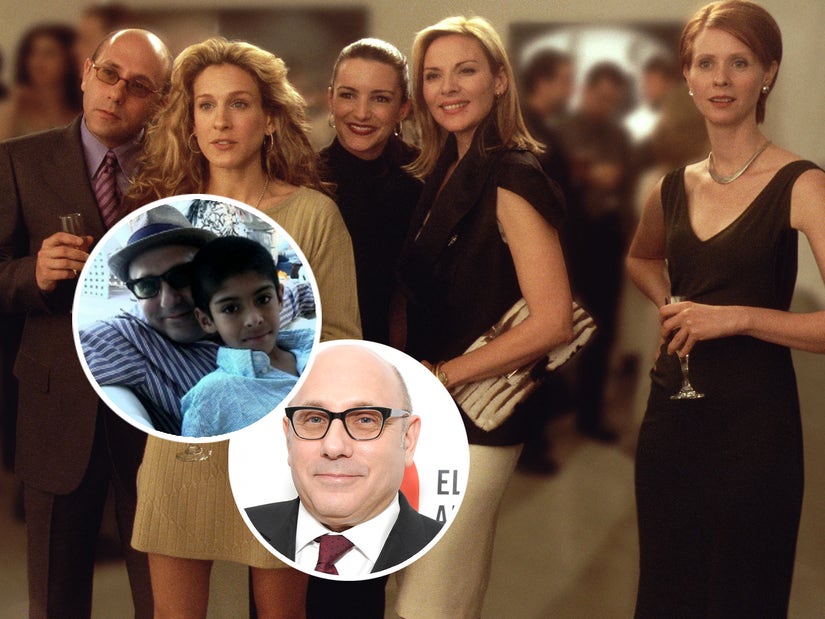 "I'm glad you can be at peace now," shared his son, while Cynthia Nixon, Chris Noth, Kim Cattrall and more post touching tributes.

Sarah Jessica Parker shared a heartbreaking tribute to her late friend and "Sex and the City" costar Willie Garson on Friday.

Taking to her Instagram, the actress shared a series of photos of the pair while lamenting the loss of a "30 + year friendship" with the actor, who passed away following a pancreatic cancer battle on Tuesday.

"It's been unbearable," she began. "Sometimes silence is a statement. Of the gravity. The anguish. The magnitude of the loss of a 30 + year friendship. A real friendship that allowed for secrets, adventure, a shared professional family, truth, concerts, road trips, meals, late night phone calls, a mutual devotion to parenthood and all the heartaches and joy that accompany, triumphs, disappointments, fear, rage and years spent on sets (most especially Carrie's apartment) and laughing late into the night as both Stanford and Carrie and Willie and SJ."

She went on to say that she will replay their moments together, re-read every text from his final days and put their last phone conversations to paper.

"Your absence a crater that I will fill with blessing of these memories and all the ones that are still in recesses yet to surface," she added.

Parker then sent a sweet message to Willie's son, saying "My love and deepest sympathies and condolences to you dear Nathen. You were and are the light of Willie's life and his greatest achievement was being your Papa."

She concluded, "These were his last words to me. 'Great bangles all around.' Yes. Godspeed Willie Garson. RIP. X, SJ"​

According to his New York Times obituary, Garson died of pancreatic cancer.

"As Stanford Blatch, Carrie Bradshaw's best male friend, Garson was never at a loss for a caustic quip," the obit continued. "As his role evolved over the course of six seasons, Stanford was not only hilarious, but also vulnerable at times, as he struggled in his own efforts to navigate sex and the city."

His family also asked that, in lieu of flowers, donations be made to the Alliance for Children's Rights in his name.

Willie Garson, best known as Stanford Blatch on the HBO series "Sex and the City" and its films, has died. He was 57.

TMZ was the first to break the news.

Garson leaves behind his adopted son, Nathen, who also appeared to confirm the news on Instagram.

"I love you so much papa. Rest In Peace and I'm so glad you got to share all your adventures with me and were able to accomplish so much. I'm so proud of you," Nathen wrote. "I will always love you, but I think it's time for you to go on an adventure of your own. You'll always be with me. Love you more than you will ever know and I'm glad you can be at peace now. You always were the toughest and funniest and smartest person I've known. I'm glad you shared [your] love with me. I'll never forget it or lose it."

Though he never married, Garson became a father in 2009, when he adopted the then-7 and a half year old boy. "I was single, I wanted a child and while I was in a long-term relationship, she did not want to have babies. That is fine but I always wanted to be a father," he told Medium last year.

While he did choose to adopt an older child and has become an advocate for others to do so, he said he didn't expect a seven year old. That being said, he told the outlet it was "an easy decision" to adopt him. "The second I saw him I knew he was mine and he would be my son."

On the boy's 20th birthday in July, Garson wrote, "Happy Birthday to my little devil, an adult now, more than any concept of son I could have imagined, with the best heart I know. Love you more than I could imagine I am able to. May this next year of college be the springboard to your future, and know that I and many others are with you always. I adore you."

The actor got his start appearing on shows including "Mr. Belvedere," "Quantum Leap" and multiple episodes of "The X-Files," "Boy Meets World" and "NYPD Blue," before his debut on "Sex and the City" in 1998.

He would become a mainstay on the series, appeared in both of the spinoff films and has been seen filming for the HBO Max revival, "And Just Like That." The show is still in production.

"The 'Sex And The City' family has lost one of its own, our amazing Willie Garson," said SATC showrunner Michael Patrick King, per Deadline. "His spirit and his dedication to his craft was present everyday filming 'And Just Like That.' He was there -- giving us his all -- even while he was sick. His multitude of gifts as an actor and person will be missed by everyone. In this sad, dark moment we are comforted by our memory of his joy and light.”

SATC creator Darren Star also paid tribute to the actor. "Sweet, soulful and hilariously funny, Willie touched all of us with his big heart and generous spirit. The man behind Stanford was a loving father, a mensch to his friends and radiated kindness to all. He is gone much too soon."

Mario Cantone, who played Garson's husband on SATC, took to Twitter to honor his friend and colleague, calling him "a brilliant TV partner." Cynthia Nixon echoed Cantone's sentiments in her own post, writing, "We all loved him and adored working with him."

Kim Cattrall called it "a terribly sad loss to the SATC family" in her tweet honoring his memory. You can see their full comments below.

Kristin Davis shared a longer tribute, writing about how the two first met back in 1995 on the set of the "X-Files," where he "immediately" made her laugh. "Willie is beloved by our entire community. He was smarter and funnier than you ever would have imagined. We are bereft without him," she continued. "But I really want to pay tribute to his fearless commitment to single fatherhood. We spoke about being single parents through adoption often. And nothing gave him more joy and pride than his son Nathen. Nathen's strength and wisdom beyond his years are evident in his beautiful tribute to his dad. The outpouring of love is earned dear Willie."

Post-SATC, he starred as Meyer Dickstein on "John from Cincinnati" and played Mozzie on USA's "White Collar." More recently, he appeared on multiple episodes of "Hawaii Five-0" and "Supergirl."

His last social media post was on September 4, 2021 -- in which he reminded his followers to "BE KIND TO EACH OTHER......ALWAYS. LOVE TO ALL. APPROACH KINDNESS."

See more tributes below from his celebrity friends and former costars.

Tonight's MAZEL is dedicated to Willie Garson who sadly passed away.

May he rest in peace & may we always remember his legacy. ❤️ @Andy #WWHL pic.twitter.com/nDjTLMc24L

So deeply, deeply sad we have lost @WillieGarson. We all loved him and adored working with him. He was endlessly funny on-screen and and in real life. He was a source of light, friendship and show business lore. He was a consummate professional— always. pic.twitter.com/G63EJIj8lG

I couldn’t have had a more brilliant TV partner. I’m devastated and just overwhelmed with Sadness. Taken away from all of us way soon. You were a gift from the gods. Rest my sweet friend. I love you. pic.twitter.com/Ia4tg1VK1Y

Such sad news and a terribly sad loss to the SATC family. Our condolences and RIP dear Willie xo pic.twitter.com/yXhPkxRTv3

Willie was the funniest person I’ve ever known. He was also a great father through adoption.

If you’d like to do something nice, donate a few bucks to the adoption agency of your choice in his honor. #WillieGarson, you will live forever in our hearts. pic.twitter.com/YFX0CDxjAn

Godspeed, Wilhelm. You know I love you and always will. https://t.co/DrQvScVIVS

Willie Willie Willie. I’m absolutely heartbroken you’re gone. Your presence filled every room you were in. Your generosity with your time and your heart for me and my friends and family was always appreciated more than you could’ve known. Love you, Willie https://t.co/rpcFtKkNaH pic.twitter.com/pPTfBUHEri

This is heartbreaking. Love you @WillieGarson. You will be sorely missed 💔💔💔 #RIP #WillieGarson https://t.co/hlkZT3ABVw

There are no words. I love you dear brother. We are fewer pic.twitter.com/Q4Sblb7Nqw

Sending love to @WillieGarson’s son Nathen. Your dad was strong and respected in his community of fellow actors and his philanthropy was constant and committed. I’m grateful I knew him. He was also really really funny.❤️

This breaks my heart. Willie Garson, a friend who loved me at my worst, (and always let me know it) is gone. Goodbye, Fatty. I love you always. https://t.co/Cow3esS0YB

Rest in peace @WillieGarson Thank you for your kind heart. https://t.co/oKuJ6ONHQH

Sadly, it is true… Willie Garson has died. He was so talented, so committed to social justice, so loved by so many. But most of all, he was a great, devoted, father. He will be sorely missed.

💔We met on the "best friend of lead character" tv audition circuit a million years ago. This was his last tweet to us. https://t.co/tgxOisStQx

WHAT A DELIGHT IT WAS TO WORK WITH WILLIE GARSON AS DICK DICKER ON PUSHING DAISIES - HE WAS ALWAYS IN ON THE JOKE AND WILL BE MISSED BY SO MANY. R.I.P. WILLIE. pic.twitter.com/y6OvGPrUfw

The wonderful Willie Garson has left us. A dear, funny, kind man and delightful actor. Too soon. Rest well. #ripwilliegarson

In shock over the loss of WILLIE GARSON
A lovely guy&a great actor who’s been part of our small community of character actors here in Los Angeles as long as i can remember
Always warm & supportive &just,i was always happy to see Will &i can’t believe he’s gone
Prayers for his son

Rest easy sweet @WillieGarson …I am so glad I told you I adored you before you left #rip pic.twitter.com/CwFDJt6FrR

Such sad news about Willie Garson. I remember seeing Willie in Vegas. We decided to go play craps. We went on a crazy run. Couldn’t lose. Every time we hit the point we would turn to each other and do an insane victory dance. The pit boss hated us. RIP. Much love to his family.❤️ 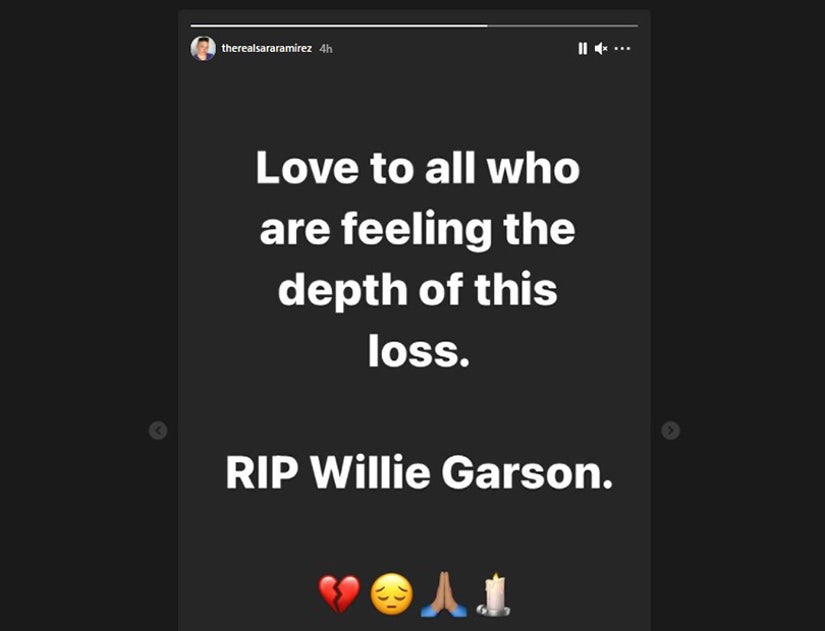