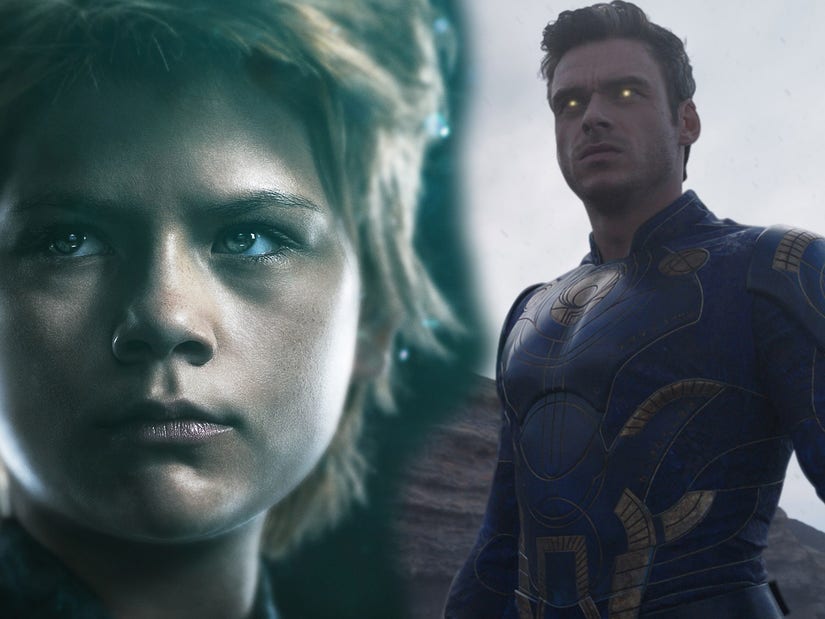 McHugh was "obsessed" with his live-action "Cinderella" -- and even had a Cinderella-themed bash for her 11th birthday.

Getting to work alongside stars like Angelina Jolie and Salma Hayek is a big deal for any actor -- but for "Eternals" star Lia McHugh, she was most excited about coming face to face with Prince Charming.

McHugh plays Sprite, a master of illusion in Marvel's new superhero epic directed by Chloe Zhao. While she, like her cosmic counterparts, is over 7,000 years old, she's trapped in the body of a 12-year-old girl. The gig is huge for the 14-year-old, who previously starred in the supernatural flick "The Lodge" and Kyle Richards' short-lived series "American Woman" before joining the MCU. 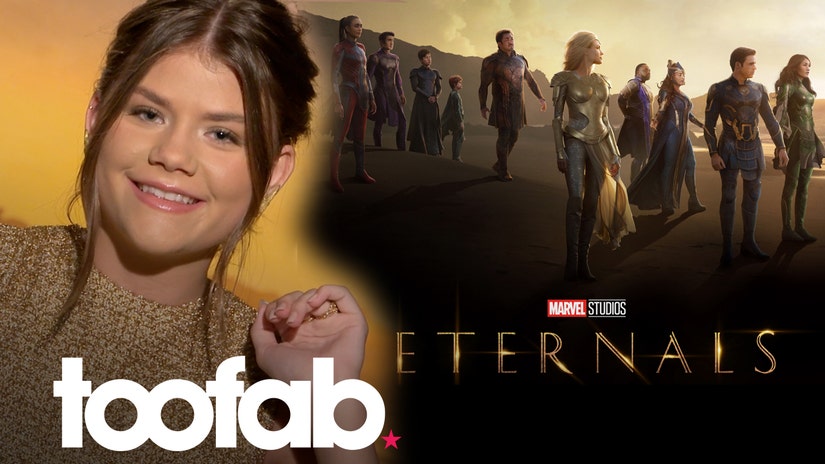 "But finding out that I was in that I was in the MCU, it was just such like so many emotions and so many feelings," she recalled. "My mom came in the room crying and woke me up from my sleep and I thought I was dreaming, and I just started crying. I didn't know how else to react. And then my dad came in and he started crying. Then I'm like, 'Oh my gosh, I want to call everyone,' but I couldn't tell anyone, it was awful. I mean, you know, you get that excitement and then you're like, dang it, I can't tell anyone."

The full cast was announced publicly at Comic-Con in 2019, which was also the first time McHugh met most of her costars ... including Richard Madden, someone whose past work made quite an impression on the young star. And, no, we're not talking about "Game of Thrones."

"When I first got the part, the only thing that I knew about was like rumors. So Angie was rumored to be in it," she explained. "I knew Richard was in the movie, wasn't sure about anyone else."

"And then when we went to Comic-Con, I got to meet a lot of the cast on that day when we all like were introduced on the stage," she continued. "I was just so beyond excited to work with Richard Madden. I mean, I was such a big fan of 'Cinderella,' I went to see it in theaters, I was obsessed, I had a Cinderella-themed birthday party for my 11th birthday. I was so beyond like giddy and fanning him."

She added that feeling hasn't dissipated either -- adding that, after not seeing each other for a good year before this month's big premiere, she was still excited to see him and exclaimed, "Oh my gosh, I missed you so much!' 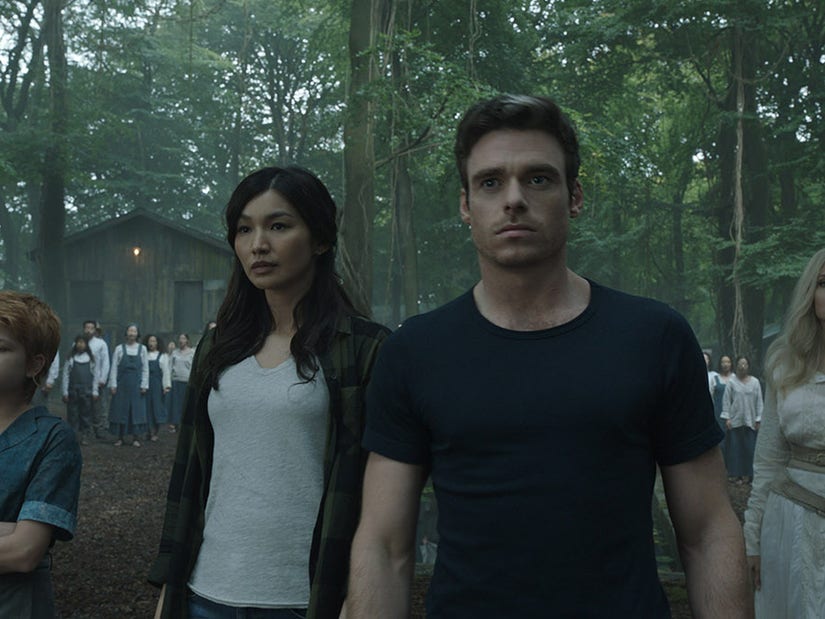 While Sprite looks like a child, all her counterparts were created by the Celestials looking like full grown adults, making McHugh the only main cast member under the age of 25. That meant being surrounded by and working with adults for the entirety of the shoot, as the only kid actor on set.

"Working with adults in general, especially, an A-list cast like this, I put a lot of pressure on myself to really live up to the expectations of all these other incredible experienced actors," said McHugh. "I felt they all really made me push myself to be on their level."

She added that, while the youngest on set, they all made her feel like she "was one of them" and added that she "didn't feel alienated at all" by her older costars. "I didn't really feel like I was a kid when I was on the set," she added, "I felt like one of them. We were all treated so well and as equals and it was really nice."

The only area where all things weren't created equal: the costumes.

In the film, the superheroes all don suits that, at first, appear very similar -- with a cohesive style and matching gold, geometric filigree. A closer look, however, shows the designers left room for some individuality, thanks to different colors per hero and a mix of tunics, skirts and capes. 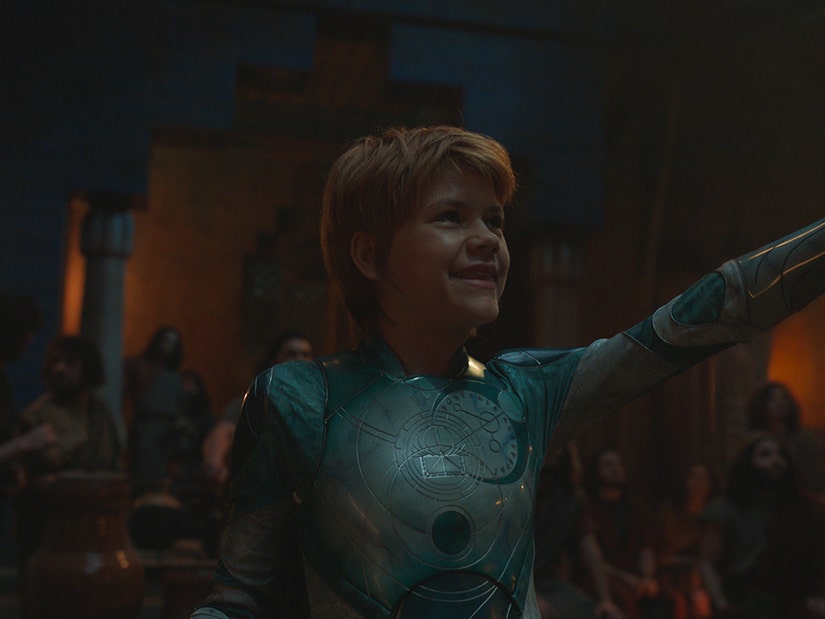 "It was actually a couple months into filming when we went to the Canary Islands that I believe was the first time we were all in our super suits together. I was a little jealous of some of them because they got zippers to go to the bathroom and I didn't," joked McHugh. "I should have asked for that ... the things you don't know to ask for when you're a superhero. Some of them even got pockets!"

She recalled it being "freezing" that day, with winds so strong they "couldn't see anything." While they'd literally only open their eyes to "try and look really cool for a few seconds" of filming before retreating, she said it was still a "very cool" experience to be all decked out.

When it comes to Sprite's regular day clothes, however, McHugh was less enthused. As the press notes explain, the character is drawn to menswear, opting for waistcoats and trousers as a way of exuding a more adult appearance despite her young body.

"I thought it was great for the character but it wasn't personally my style. Very, very different," said the teen. "As an actor you sort of have to get past the embarrassment. That's the first thing you do as an actor, you embarrass yourself a lot of different ways when you do different types of scenes. So I've already, I've totally gotten past the embarrassment, so I rocked it. I tried my best to just be comfortable with what I was wearing and I thought it was cool."

McHugh applied that same approach to learning pages of ancient Babylonian for a flashback scene in the movie -- another moment that forced her to really step outside of her comfort zone.

"It was a few paragraphs of Babylonian actually. I had a dialect coach, who helped me and she was actually like, 'Wow, you got it pretty quickly.' I really stressed myself out about it," said the actress. "I'm on a Marvel set, I'm not gonna screw up my lines and it was also a speech in front of a bunch of extras on a set. Everyone had to look at me like what I was saying was so cool and no one had any idea what I was saying. it was really funny to shoot, I mean I almost started laughing multiple times."

While Ant-Man never had to learn Babylonian, one aspect of filming "Eternals" that wasn't unique to McHugh's experience was the insane secrecy surrounding any project in the MCU. As she said above, she barely knew who she was playing until she landed the role -- and Marvel is known for doing everything in its powers to keep spoilers from leaking.

Though some stars haven't had the best track record preserving those secrets -- Tom Holland and Mark Ruffalo come to mind -- McHugh actually loved being in the know.

"Not a lot of the other actors feel this way but I think the secret keeping is kind of cool," she said. "I mean, to know stuff that nobody else knows and to sort of tease it, and I have a lot of big Marvel fans who are friends of mine, and they're asking me some stuff."

We'll see if any of her friends were right when "Eternals" hits theaters November 5, 2021.