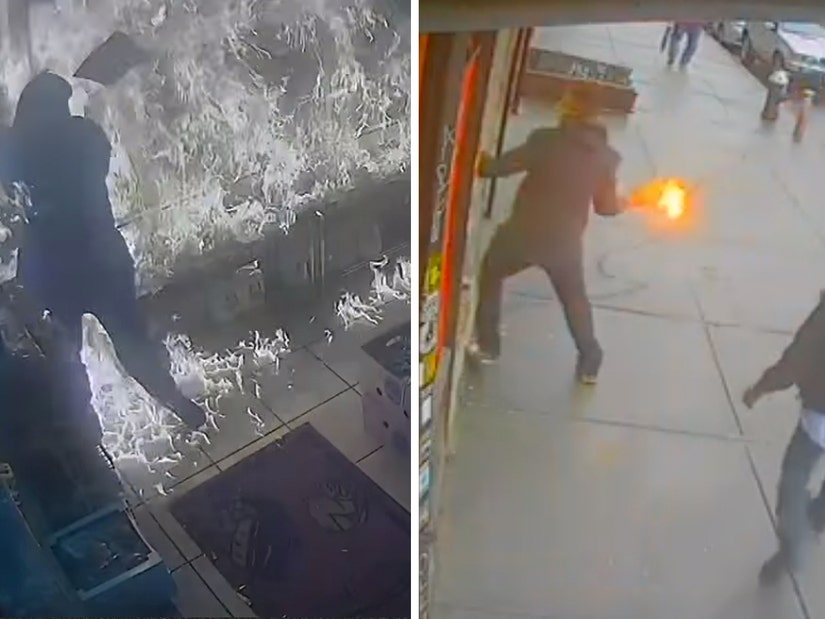 The wild footage shows a bystander stopping the man from throwing a second bottle into the store.

Fire Marshals in NYC arrested a man on Sunday after he was caught on video throwing a Molotov Cocktail into a Brooklyn deli.

According to deli worker Mohamed Abdulla, the man -- who FDNY have identified as Joel Mangal, 38 -- was "threatening" him in the store before the attack. "He was threatening, 'I'm gonna kill you. I'm gonna burn the store. I'm going to burn the building down,'" Abdulla told CBS 2.

Moments later, Mangal started to make good on his promise -- stepping outside the store, lighting up one "improvised incendiary device" and tossing it into the establishment. A camera inside the store released by FDNY show the terrifying moment the deli went up in flames, as those inside scrambled to get out of the fire.

The outside camera footage also shows Mangal attempting to throw a second Molotov cocktail into the store, before a bystander knocks it out of his hand, causing it to instead explode on the sidewalk (below).

Abdulla said he chased Mangal for two blocks to a train station, where he was slashed by his attacker in the hand while waiting for police.

"Firefighters were called at 7:53 a.m. for reports of a store fire and arrived in three minutes," FDNY said in a statement. "The rapid response allowed Firefighters to quickly bring the incident under control and provide medical treatment for one civilian with non-life-threatening injuries."

"Fortunately, there was no loss of life here. The investigative work from the Explosives and Arson Task Force comprised of our Fire Marshals, the NYPD, and ATF, led to the timely arrest of this suspect who threatened the safety of our communities by using such a cruel and destructive device," added Fire Commissioner Daniel A. Nigro. "FDNY will continue to work alongside local, state and federal partners to bring to justice those who use fire as a weapon against New Yorkers."

Mangal was charged with Arson, Assault, Reckless Endangerment, Criminal Possession of a Weapon, and Criminal Mischief.