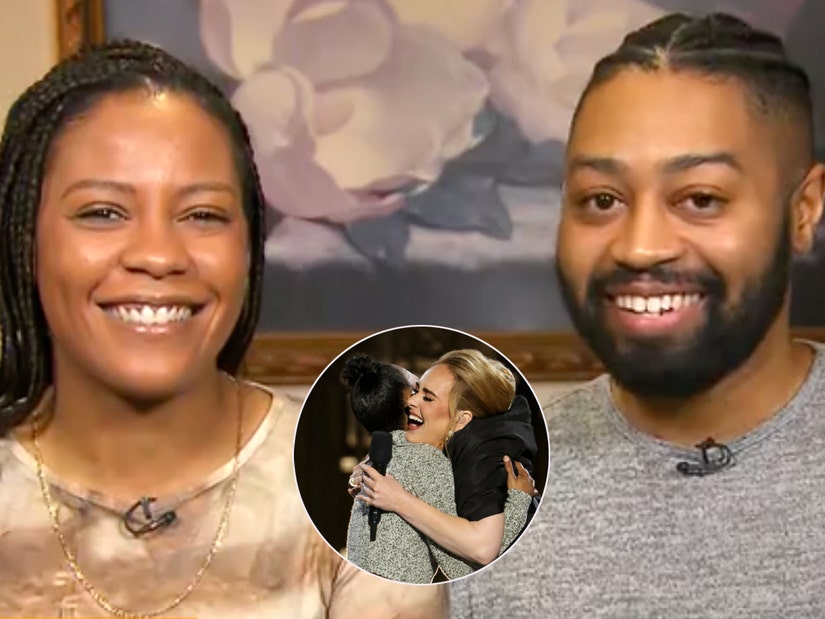 The two reveal what they did and didn't know before the epic moment -- and whether they'd want Oprah to officiate their wedding.

Quentin Brunson and Ashleigh Mann, the couple who got engaged during Adele's primetime concert special, are spilling details behind their epic proposal.

For those who missed it, at one point during CBS' "Adele One Night Only" concert special, which aired on Sunday night, Adele had the audience get quiet and the lights were turned down before Brunson then escorted his blindfolded soon-to-be fiancée out in front of the stage.

After Mann took off her blindfold, Brunson popped the question to his girlfriend of seven years, who, of course, said yes. The lights then came on, revealing Adele on the stage. Mann, who was already a puddle of tears, was absolutely stunned, and at a loss for words after seeing the singer and the crowd. The already-emotional moment was brought to another level when Adele then performed "Make You Feel My Love" for the newly-engaged couple, as they sat next to a ton of celebs.

New life goal: Get engaged in front of @adele. 💍 pic.twitter.com/ybfa922aHg

While appearing on "CBS This Morning" on Monday, Brunson and Mann opened up about the proposal, revealing how the two came to be there, what was going through their heads during the magical moment and Mann's reaction to Melissa McCarthy handing her a tissue.

Speaking to Gayle King and the "CBS This Morning" hosts, Mann first shared where she thought she and Brunson were going that night. "I honestly thought that we were going to go on a hayride," she said. "I had been talking about going to the pumpkin patch, so I just assumed we were doing something cool like that."

"I saw him down on one knee and then Adele was there and then I was like, 'Am I alive? This could be a dream,'" Mann recalled, adding her reaction to seeing some of the stars in the audience, including McCarthy, Lizzo and Kerry Washington. "I'm like, 'OK, this is a dream, for sure. This is definitely a dream.'"

As for how the wild proposal came to be, Brunson responded to an ad from the event's producers, who were "looking for people who wanted to propose." Brunson sent in a one-minute video, detailing why he and Mann "deserved the opportunity."

"I felt like this opportunity was from God for sure because it was made for us," he explained. "Once it came across my table and I saw it, I just knew that if I submit to this, they're going to pick us because, I don't know, we have so much to offer. And I'm just happy that everything went the way it did."

Brunson -- who said it was "nerve-wracking keeping the secret" -- shared that he wasn't aware of the celebrities who were going to be in the crowd, and revealed he wasn't told it was going to be an Adele concert until "a couple of days" prior.

"I did not know who was going to be there in the audience," he said. "When I was out there, as we were walking to the front, I was trying to not look into the audience and make any eye contact because I just [knew] I was so nervous."

"I started tearing up and I'm like, 'I can't be out there crying,'" he continued. "So I tried to get out there and get it done. It was just a lot. It was very overwhelming for sure."

Before Adele began singing following the couple's engagement, the singer directed Brunson and Munn to sit in the front row, where McCarthy and Lizzo were also sitting. Munn was seated right next to McCarthy, who gave Munn a tissue.

When King asked Munn about the moment and if she spoke to McCarthy and Lizzo, Munn said, "Oh absolutely," before jokingly adding, "I'm pretty sure we're all best friends now so hopefully, they're coming to the wedding."

“This opportunity was from God, for sure”: Quentin Brunson proposed to longtime girlfriend Ashleigh Mann during @Adele’s @CBS special — and then the singer serenaded the newly engaged couple. pic.twitter.com/BaduNAfc9a

"But all I was thinking to myself was thank goodness someone had a tissue. He knew I was going to cry like a 5-year-old," she continued. "I'm very thankful. Melissa, thank you so much for the tissues. I needed them. Still there was make-up all over my face. But yeah, it was pretty awesome."

Watch the full interview, above.

Meanwhile, the couple also appeared on Monday's episode on "The Talk," with co-host Jerry O'Connell jokingly -- or maybe not so jokingly? -- suggesting possible options for an officiant as well as a singer for the couple's wedding.

"I want to throw this out [there], okay, your officiant, Oprah Winfrey," O'Connell said, to which Mann replied, "Exactly. Love that."

"I'm saying, we, you could make that phone call happen," O'Connell continued. "And here on 'The Talk,' I think we can also make this happen: Your performer, Adele. Boom."

While the two haven't been engaged for long, Munn said she already has "a good idea" of what she has in mind for the wedding -- she's been "waiting" a long time after all.

"I'm a woman who's [been] waiting, so you know I've got a good idea," she said. "I'm trying to play it cool right now, but yeah, no for sure, it's already planned."