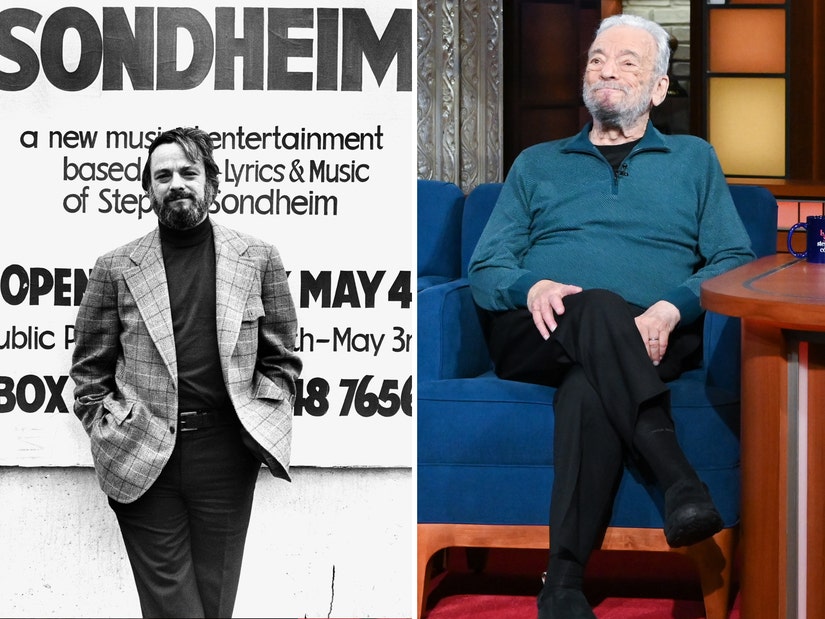 Celebrated Broadway icon Stephen Sondheim died at his home on Friday, November 26. He was 91.

According to his lawyer and friend F. Richard Pappas, speaking to the New York Times, the legendary composer-lyricist died suddenly this morning after celebrating Thanksgiving with friends the day before.

Sondheim is easily one of the most prolific Broadway icons ever, with nine Tony Awards to his name, as well as an Oscar for "Sooner of Later (I Always Get My Man)" performed by Madonna in "Dick Tracy," a Pulitzer Prize and eight Grammys.

One of his earliest successes was writing the lyrics for "West Side Story," before doing music and lyrics for shows including "A Funny Thing Happened on the Way to the Forum," "Company," "Follies," "Sweeney Todd: The Demon Barber of Fleet Street," "Merrily We Roll Along," "Sunday In the Park with George," "Into the Woods" and "Assassins" -- many of which were also adapted into films. A new version of "West Side Story" is even due out this December.

Sondheim choking up earlier this year as Colbert tells him how much he means to him. pic.twitter.com/Ar4TbWRBuF

Back in September, during one of his final public appearances on Stephen Colbert, Sondheim revealed he was working on a new musical with playwright David Ives called "Square One," with Nathan Lane and Bernadette Peters sharing they did a reading of it.

After his death started making headlines, stars from Hollywood and Broadway all took to social media to share their tributes.

I was just talking to someone a few nights ago about how much fun (and fucking difficult) it is to sing Stephen Sondheim. Performing his work has been among the greatest privileges of my career. A devastating loss.

We’ve lost the great #StephenSondheim. The rest is silence.

I met him once for 30 seconds backstage after a production of Merrily We Roll Along. I have never been more tongue tied or star struck. His writing is the singular reason I wanted to be a musical theater actor. No one will ever come close to his genius. RIP Stephen Sondheim.

Thank the Lord that Sondheim lived to be 91 years old so he had the time to write such wonderful music and GREAT lyrics! May he Rest In Peace🥲🎵 🎶🎵 pic.twitter.com/vshNSdkvpQ

Stephen Sondheim was the best there ever was. I don’t know when we will ever have another of his caliber, of his breadth and scope. Just the greatest, a legend, a true titan. Rest In Peace. ❤️

Stephen Sondheim- thank you for all of the gifts you have given to the theatre. You have been an inspiration to me and it has been a joy working with you, and being in your presence. RIP, you incredible artist!! You will live as long as your songs are sung! #StephenSondheim

I loved #StephenSondheim. His music was so complex and haunting. He created some of the most beautiful innovative theatrical masterpieces I have ever experienced. https://t.co/S8X0PIEb6z

Perhaps not since April 23rd of 1616 has theater lost such a revolutionary voice. Thank you Mr. Sondheim for your Demon Barber, some Night Music, a Sunday in the Park, Company, fun at a Forum, a trip Into the Woods and telling us a West Side Story. RIP. 🙏 https://t.co/jHX7ob9JWv

Thank you for everything Mr Sondheim. Speechless. We are so lucky to have what you’ve given the world. https://t.co/jtCOoX3Cyv

The eulogies written won’t cover a quarter of the impact you had on every theatre artist working today.

Your corporeal absence will be felt at the openings of new artists you often attended (including mine—thank you) but you will continue living in so many works.

An extraordinary artist is gone. He gifted the world with so many incredible songs, & many performers’ careers were catapulted by the signature, iconic material he wrote for them. May he Rest In Peace. #Sondheim pic.twitter.com/6bB6tOLsRM

Just posted this last night as I walked into my friend’s house for Thanksgiving. Fuck. 💔❤️ pic.twitter.com/q08WntIwXS

American musical theater has lost a towering giant. Stephen Sondheim's legacy of song and lyric in unparalleled. From West Side Story to Sweenie Todd, from Gypsy to Sunday in the Park with George, there will never be a master like him.

I am at a loss. Feels like the end of an era. He did indeed set the standard for the American musical.

A musical theatre giant has passed away. There will never be another. Rest In Peace King 👑 🙏🏾 https://t.co/ozwbbo9GUp

Master. Legend. Icon. I was so privileged to join in 2 standing ovations last week at the opening of Company on Broadway.

Gratitude for the endless inspiration he provided to generations. He changed the world. #rip #stephensondheim 😔 pic.twitter.com/kmpKfooNYg

RIP to the man who composed the soundtrack of basically the first twenty-five years of my life. And then some. https://t.co/8DEHq8QI7e

Rest In Peace, Stephen Sondheim, and thank you for your vast contributions to musical theater. We shall be singing your songs forever. Oh, my heart hurts…

i don’t have words. https://t.co/QDTcplURfs

REST IN POWER, MR. SONDHEIM - WOW, WHAT A LEGACY pic.twitter.com/02O00Kmhfs

One of my heroes. The Legend. The man who made me want to sing theatre songs. He's inspired me more than I could ever say with mere words. Rest in prose, maestro. https://t.co/bot2gG2rif

Sondheim is the most important influence on generations of creators. His loss is devastating, but his work will continue to ripple out in every song & story we sing on stage. He simultaneously broke our hearts & taught us how to piece them back together again. A life well-lived. pic.twitter.com/QRr3DFYZSY