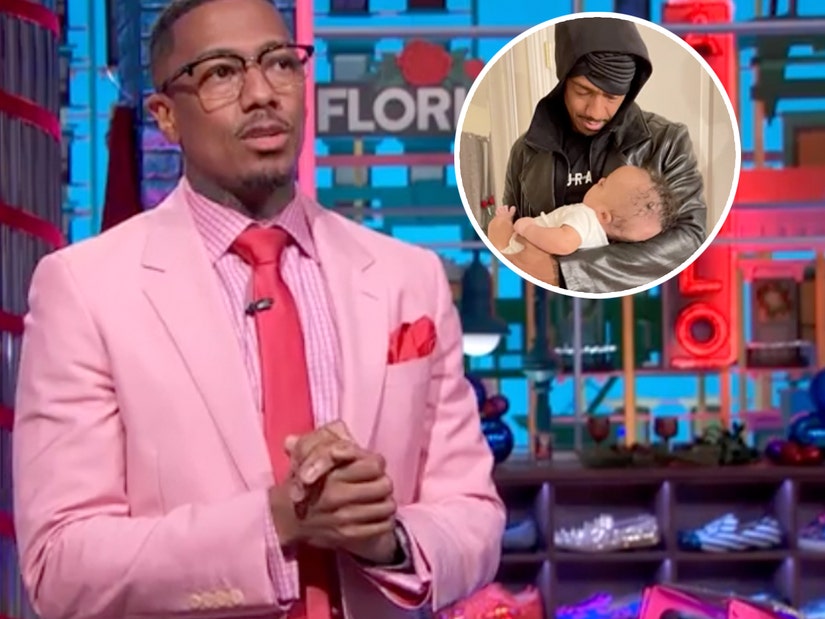 On Wednesday's episode of his talk show, Cannon thanked fans for their support, explained why he was still coming to work and celebrated Alyssa Scott's strength.

One day after revealing his 5-month old son Zen died from a brain tumor this week on his talk show, Nick Cannon thanked his fans for their support and praised the child's mother, Alyssa Scott, for being a "superhero" through this hard time.

"This energy is real. Even in our lowest moments, it's the other people around you, it's your family that builds you up," said Cannon as he stepped out to thunderous applause from his studio audience on Wednesday's episode. "I'm here. People keep asking me how I'm doing I say, I'm vertical, I'm standing and you know that's a good start."

"A lot of people keep asking me, like, 'Man why are you even at work?' Especially my family members, 'Boy you need to go sit down somewhere, you got too many jobs already anyway. Allow yourself to just be yourself!'" he continued, before revealing that, for him, the love in the audience is what's helping him through it.

"This is therapy for me. This is therapeutic," he added, before filling in viewers who may have missed yesterday's show on what happened to his son.

"Yesterday, it was a little easier than today because yesterday I was so laser-focused and even numb," he said, comparing the two episodes. "I just knew I just had to get it done. Today, I'm a little torn. I'm a little confused. Because it's a hurting thing."

He went on to talk about turning to gospel music and the power of music in general when it comes to healing. He added that he's been playing Rev. James Cleveland's "I Stood on the Banks of Jordan" on repeat lately to help him.

"I'm grieving. I feel guilty on so many levels. I never wanted to exploit this, I kept it private for so long since I found out about Zen's diagnosis, in respect to his mother Alyssa and everyone in our family," he went on. "Yesterday, the onslaught of love and care. It is brand new to me. So I'm dealing with it. So, thank you. Thank you. That's all I can say. We gonna get through it. I'm not used to all of this hugging and 'You okay?' I'm fine! But of course, everyone knows that I'm not fine, but you guys are making me feel better, so thank you."

Keeping his energy positive, Cannon then joked that his pink suit was also making him feel better -- before thanking Kenan Thompson for sending his condolences during last night's People's Choice Awards, which Thompson hosted. Kenan's words were just some of the many messages of support Cannon has received in the past 24 hours.

"It's just been an outpouring of love that is really unexpected. I didn't expect it from all over the world I really can't thank you guys enough," he continued. "When I'm talking about the guilt I don't want even make it about me, but I say thank you from Alyssa, Zen's mom, and the rest of our family. People are wondering how she's doing. She's making it, you know, five minutes at a time. But those words really, the tweets, it's outstanding."

After sharing a few messages of love and empowerment from viewers, he added, "You never know how strong you are until being strong is the only option. We here. We're smiling through the pain."

He added that, if it weren't for the show, he'd "probably be in bed curled up" -- and while he admitted he still does have those moments, his viewers "give me a reason to get out of bed each and every day."

Cannon ended the opening segment of the show by sharing his "Pic of the Day," a regular segment which he decided to dedicate to Scott on Wednesday. Showing a photo he had taken of Alyssa and their son just this past Sunday, Cannon said he wanted to take a moment to "talk about the strength that this woman possesses in this moment."

"I apologize for so many things. I just know if there's any weight or anything that I've caused, I'm not gonna get everything right, this process is difficult for the both of us. I thank you for being that strength, and being that rock," he added.

"Love to Alyssa, love to her extended family, and love to each and every mother that has ever had to lose a child had to deal with a child with special needs. I watched her growth," he concluded. "Mothers are superheroes at every aspect, and I want to just take this time out to say she is doing well but continue to pray for her, continue to pray for our entire family. And we're gonna get through it."

On Tuesday, Cannon shared that they started noticing something was wrong around around the time Zen was 2-months, when doctors discovered fluid building up in Zen's head. After also discovering a tumor, he had surgery. Around Thanksgiving, he revealed, the "tumor began to grow a lot faster."

Cannon held his son for the last time over the weekend at the beach on Sunday.