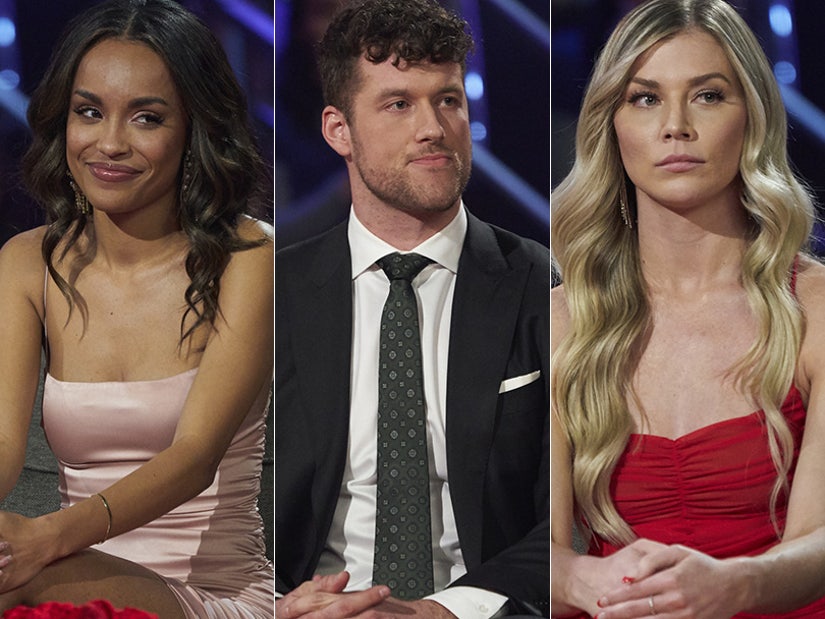 This may well go down as one of the most dramatic and volatile "Women Tell All" specials in  the history of "The Bachelor" franchise. We knew it was going to be wild, and yet we still had no idea.

Surprisingly, or as requirement for her joining "Paradise" (baseless speculation), Shanae actually agreed to show up and face the firing squad that was every single other woman on the dais.

Early season villain Cassidy was there, too, but the two women could not have approached this opportunity differently. Cassidy didn't go so far as to apologize for anything she'd done on the show, which included lying to Clayton Echard about her side piece, but at least she owned it.

She hilariously went so far as to say that she was of course going to hang onto a good thing -- but she didn't use the word "thing" -- if this didn't work out. Had it worked out, though, she was ready to cut loose. So is it slut-shaming to call her out for that?

The other women tread very carefully around the issue, insisting repeatedly that her having a friend for casual sex wasn't the issue. Their bigger issue was her hanging onto him to reconnect after her time on the show. But it was a 1-in-30 shot she'd win, so is it so wrong?

We suppose it depends on how committed someone should be to the process before they even meet the guy they're going to be dating alongside 29 other women.

While Cassidy seemed to show some emotional intelligence as to how her aggressive gameplay impacted the other women in the House, Shanae was still fully in character. Honestly, we're still not sure if this is anything close to what she's really like or if it's just the "Shanae-nae" personality she's created.

She was still twisting stories around, avoiding direct questions and abjectly refusing to own up to her behavior or apologize for any of it. When Jesse brought Genevieve up to confront her again a la their Two-on-One, Shanae accused her of sleeping with Aaron from Katie's "Bachelorette" season after the show, based seemingly on a picture of the two of them at a bar together.

Genevieve denied it, saying that nothing at all happened, with everyone shocked she would even go there? Was it classic misdirect to try and shift attention away from truths being exposed about her?

She even basically admitted she'd lied to Clayton's face during the scene where she fake apologized to the women for throwing their trophy in a pond but said she did it for him -- because he wanted her to apologize.

Can she really be that clueless about how abjectly terrible that is for someone to do within a relationship? Does she really think the behavior she displayed and what she said in confessionals is okay? It's hard to fathom she could be that dense and clueless, which is why we hesitate to believe any of this is real.

With any shot at being a "Bachelorette" thrown out the window because of course it is, we have a feeling Shanae wants to be reality famous and go stir up drama on "Bachelor in Paradise" or some other even trashier reality show. All of this feels like an audition type for "Archetype: Reality TV Villain."

She also made it a point to say twice that she didn't care about anything the other women were feeling or needing to express. Is it narcissism, as some suspected, or just playing a role?

Even at an emotional time for all the women, when Shanae crashed a party she had no right to be at and made up some story after attacking the women, he was still more than down to put her up on a bar and give her a thorough oral exam with his tongue.

Sierra told Clayton he was "confusing love and lust" still and that she didn't believe he was ready for marriage. Based on how the rest of the evening played out, it's wholly possible he's not -- and not close to one, either.

The other person accused of being fake is Sarah, who came into the show with a seemingly sincere affection for Clayton. She was accused ultimately by most of the women of exaggerating her time with Clayton to the point she had many of them convinced she was already the winner.

We never really saw any of that on the show, but it may be that it mostly happened when the cameras were off. We will say that when given the chance to own up to a single lie that Clayton had previously denied -- he cried on their first One-on-One -- she hedged it as long as she could, before saying there were tears.

When Clayton finally came out and the topic came up again, he said that he'd never cried on any dates with Sarah. That led her to abruptly change her story to suggest that she never said he cried to her face ... which is not what she said.

This, of course, puts into question everything she's claimed on the show about her connection with Clayton. And it's certainly very possible that she was creating these small fabrications as a tactic to undermine the confidence of the other women as a far sneakier tactic to "win" than Cassidy sucking face with him at every moment.

We kind of loved Cassidy admitting that her approach obviously didn't work at all as she went home Week 2. Sarah had a smirk at times while Clayton was talking, and never seemed to own up to anything she may have done wrong.

It's all very jarring because even the montage at the top of her journey seemed to show that her feelings for him were genuine and that she really was all in for the right reasons. Was it acting, or perhaps were both things true? She was into Clayton for real and also doing these underhanded things to "win" and weaken the competition.

We supposed it's possible to want to do everything possible to eliminate all the other girls because you really, really like the guy and want to win him in the end. And if she was doing that, she was smarter than Shanae in that she didn't go on and on about her brilliant acting and plans in confessionals.

We may never know what her truth is -- as we certainly can't take whatever she might say at face value. It's unfortunate that so many people openly lied during this show, casting doubt about what really happened. We're still super disappointed that Elizabeth lied about being in the hot tub when Shanae offered shrimp to the girls because why lie about that, and it only undermined her own take as a victim of Shanae's manipulations.

There are still two episodes to go, but there may be a reason that the show seemingly started spoiling Clayton's entire journey before the season had even begun. Fans were furious when teasers seemed to reveal his Final 4 or 3, as well as the fact he'd slept with at least two of them and fallen in love with three of them.

Now, some of that comes a bit more clear as even Jesse Palmer pointedly said that he was there and he still doesn't now how Clatyon's journey ends. The "Women Tell All" specials are usually taped closer to the airing of the finale, which means this was filmed after main filming on the series had ended.

The only way Jesse could not know how the story ends is if it didn't end in that final episode with a traditional proposal. We already know that the women are destroyed when Clayton abruptly tells them he's in love with three of them and slept with two.

It could be that we are truly in for "the most dramatic" finale in the history of the franchise, and we've seen leads change their mind after a proposal, chase someone across half the world to fight for a second chance.

Clayton has suggested that he didn't really enjoy his experience on "The Bachelor," and he certainly looked beat down tonight in a way that was more than just facing all these women and having to apologize to them over and over again.

We will say that we appreciated how he apologized to Serene about dumping her right after she was honest about her feelings, acknowledging that he was not giving that back to her. We don't know if it was scripted, but it looked and sounded heartfelt.

We also have to note that Teddi hinted that she knows "a lot of things" about what might be coming up next, and all she said was that she hoped he was "okay." To that, Clayton only responded quietly, "Yeah." If that isn't a major suggestion that things are going to get ugly and possibly end in total disaster, well, we've never been manipulated by Bachelor producers before.

We were hoping that there might come an announcement and introduction as to who the next Bachelorette might be, but that didn't come. Of course, it could mean several things. Both Teddi and Serene had very sweet "Hot Seat" segments where each dropped lines that a future Bachelorette might say, but neither was revealed.

Does that mean they're out? Possibly. It could also be that the next Bachelorette wasn't from this season, so they opted to not trot her out in the midst of all this drama. Or, and this could be just as likely, she may not yet be eliminated.

With filming set to begin very soon on the upcoming season of "The Bachelorette," the franchise needs to reveal its lead pretty soon, or the contestants are going to be very confused when they step out of the limo and see Kaitlyn Bristowe and/or Tayshia Adams.

Of course, that could be the twist. Maybe they're supposed to see Tayshia Adams there, because she's the next Bachelorette? She recently split with her season's winner, Zac Clark. Could she become the first Bachelorette to get a second shot at love?

With the two-night finale airing next week, and "After the Final Rose" likely in the mix, they may just be holding off until Clayton's journey is well and truly over to reveal what's coming next. If none of his Final 3 make it, any of them could be viable candidates.

As we said, while we thinks Serene and Teddi are both very sweet and would make for very strong leads, we'd still get a huge kick out of watching Gabby take the helm of this franchise. And we'd hope they would lean into her goofy side, as she's one of the genuinely funniest people Bachelor Nation has ever had, and how refreshing would that be?

Our favorite to win this season remains Susie Evans, but we don't know if that will necessarily mean that she and Clayton get a happily ever after. His love and sex bombshells clearly rock the whole show, and it's absolutely impossible to predict how that might play out.

The women could just quit and walk away, leaving him standing there with no one even to choose from. His combination of horniness and his newfound Serene-inspired conviction to be open and honest about his feelings could well blow up in his face in spectacular fashion.

"The Bachelor" Fantasy Suites air Tuesday night at 8 p.m. ET, and Clayton's journey ends next Monday and Tuesday at 8 p.m. ET on ABC.