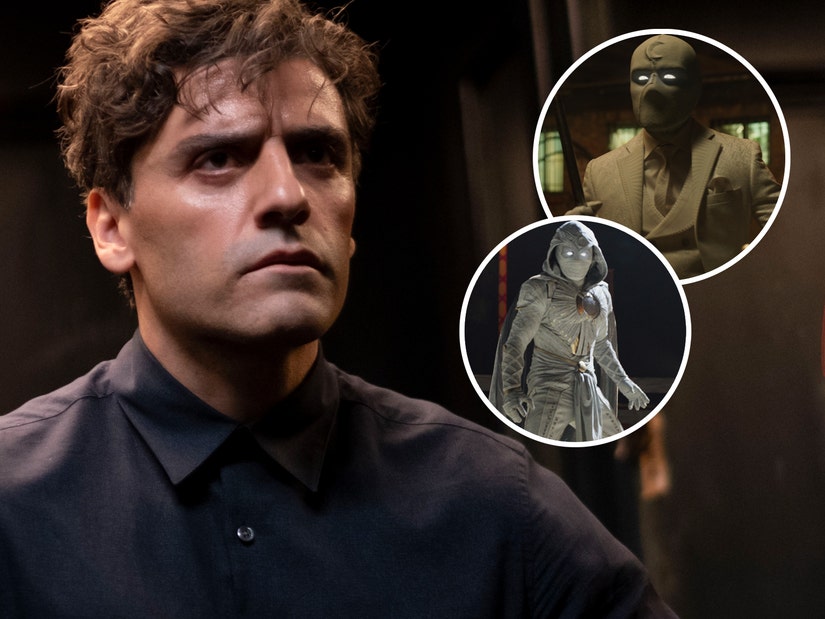 The actor's brother has a pivotal role in the new Disney+ series -- but don't expect to see him on camera.

As the titular superhero "Moon Knight," Oscar Isaac actually plays two very different roles on the upcoming Disney+ series -- and really leaned on his brother during filming to keep them straight.

Isaac plays Steven Grant, a museum gift shop worker who discovers he has Dissociative Identity Disorder and shares his body with Marc Spector, a former mercenary who also happens to be the human avatar for the Egyptian god of the moon. On the series, Isaac plays both Steven/Mr. Knight and Marc/Moon Knight with very different accents, voices and body language and, occasionally, even has internal conversations between the two personas.

"The first step was to hire my brother to come in and be the other me," Isaac revealed when asked how challenging it was to come up with both characters -- and differentiate them -- during a press conference for the new series on Monday.

"It's the closest thing to me on earth," he added of having his brother Mike Hernandez (above right) on set, saying Mike also did both accents.

"So that was really helpful, to have someone that's not only a great actor but has my DNA to play off of," Isaac continued, saying he would even give his brother notes during the "technically demanding" process.

Right from the start of the series premiere, Steven has been experiencing blackouts for some time, but has no idea about this other side to him. Eventually, he discovers his memory gaps are much worse than he thought. Steven is clearly the audience's surrogate, with viewers learning more about Moon Knight as he does.

For Isaac, being on the show gave him the "opportunity to do something completely different and really focus on this internal struggle ... to create an indelible, unusual character, particularly in Steven Grant."

"You're in the skin of this guy and you're seeing things happen, you're experiencing it just as he's experiencing it. There's something terrifying about that," he continued, praising Marvel's success in combining action and comedy, something viewers will see in a whole new way here.

When the first trailer for the show dropped, many were struck by Isaac's soft and very British voice in the footage. Speaking with press about the accent and the show's UK setting, the actor joked there's a very simple explanation for it all.

"It was set in London and when I asked why, the answer was we just had too many characters in New York, let's change it up," he said, adding that he really appreciates English humor and came up with Steven's persona by asking, "What if Peter Sellers was approached with a Marvel project, what would he do?"

"It wasn't just about accent, but his timidness, his wanting to connect to people and not knowing how," Isaac continued, adding that he also studied the Jewish community in London.

See Oscar, his accent and his superhero alter ego in action when "Moon Knight" debuts March 30 on Disney+. Check out a new clip below!