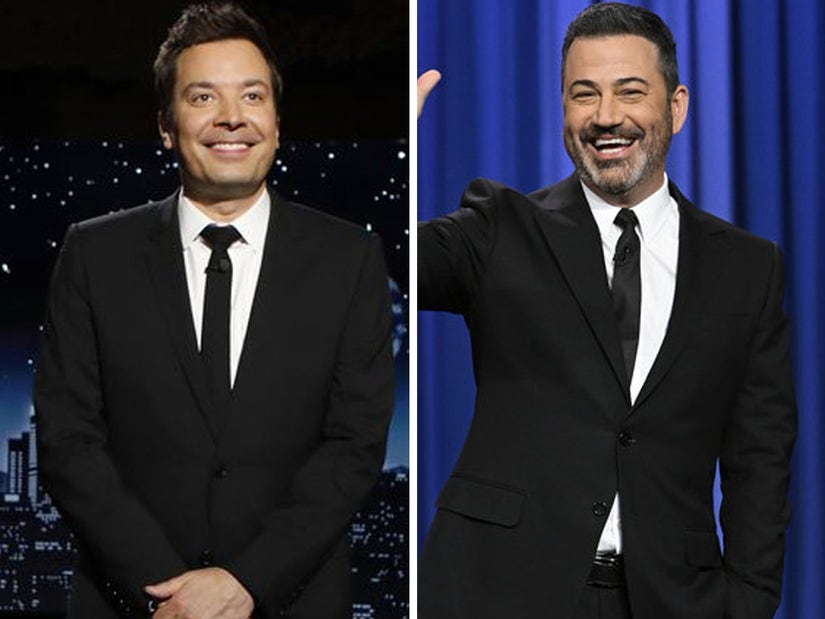 "This is something we've been planning for years. It was a top secret operation."

On Friday's episode of their late-night talk shows, the two Jimmys swapped places, with Fallon hosting "Jimmy Kimmel Live!" in Los Angeles and Kimmel taking over hosting duties at "The Tonight Show" in New York City.

And the best part? Fans in the studio audiences appeared not to have told about the "Freaky Friday" moment beforehand, making for a hilarious -- and shocking -- surprise.

Kimmel, 54, opened his "The Tonight Show" monologue by introducing himself as Fallon. After saying it was "Freaky Friday tonight," he started to make some jokes about current events, before he then addressed his and Fallon's epic switcheroo.

"Are you figuring out what's happening now?" Kimmel asked. "You're noticing what day it is, and or no, maybe? I don't know. April Fools' everybody!"

"We pulled the old switcheroo," he added. "In fact, right now, Jimmy F-word, as we call him back home, is hosting my show in L.A."

"We swapped everything. We swapped shows, bands, even wives. Bad news, Nancy — fat Jimmy's coming home," Kimmel quipped, adding, "This is something we've been planning for years. It was a top secret operation."

As for Fallon, 47, he came out on the "Jimmy Kimmel Live" stage, and said, "Hi, I'm Jimmy. Please settle down. You're going to offend the other Jimmy. Happy April Fools' Day, everybody!"

"I swapped places with Jimmy Kimmel. Although as far as things you've seen on ABC this week, this one's a distant second," he joked, referring to the Oscars "Slapgate."

In their monologues, both two Jimmys spoke about their experiences trading places. They went on to "check in" with another via satellite, and revealed that the April Fools' Day prank was two years in the making.

"We've been talking about this for a long time," Kimmel said, to which Fallon replied, "Right. April 2020."

"This is wild, bud," Fallon later said. "It's been an amazing experience. I love that we did this. I can't believe we pulled it off. I really can't believe it!"

It appears that Fallon and Kimmel filmed some fun segments in Los Angeles ahead of their switcheroo. The duo shot a hilarious video, in which they addressed how people often confuse them for one another, and shared what fans say to them when they believe they are talking to the other Jimmy. Check it out in the video, above!

They also pranked some "Jimmy Kimmel Live" fans, who were told they would be meeting Kimmel and taking photos with him. However, the two shocked and surprised each fan by having Fallon randomly appear by popping up in selfies, sitting in Kimmel's chair and more. And one fan from Milan, Italy didn't even get the joke until he was told -- it was absolutely hilarious. See it go down in the clip, below.

Kimmel and Fallon also pulled a prank on Kimmel's Aunt Chippy, who came out on "Jimmy Kimmel Live" thinking she would be interviewed by her nephew, only to find Fallon behind the desk.

Meanwhile, the two Jimmys hosted the late shows as the other would, with both Fallon and Kimmel conducting interviews and participating in games and segments from each other's shows.

Fallon interviewed Justin Timberlake, who at first pretended to be Matt Damon, poking fun at Kimmel's long-running faux feud with the Oscar winner. Timberlake later took off his Boston gear and appeared as himself, and the singer and Fallon played a game of "Hot Sax" before they went on to chat.

The iconic duo also put a spin on "Jimmy Kimmel Live's" infamous segment, "Mean Tweets." But instead of reading mean tweets about themselves, the two read "sweet tweets."

As for Kimmel, he took on Fallon's "Thank You Notes" segment, and also interviewed Bridget Everett and Hugh Jackman. Kimmel also played a round of "The Tonight Show" game, "Box of Lies," and faced off against Jackman.

Both of their musical guests were The Red Hot Chili Peppers. It's unclear how they made it work, but the band performed at both the "The Tonight Show" studio and on the rooftop of The Hollywood Roosevelt hotel in Los Angeles.

One thing's for sure: Fallon and Kimmel may have pulled one of the greatest April Fools' Day pranks in recent years.