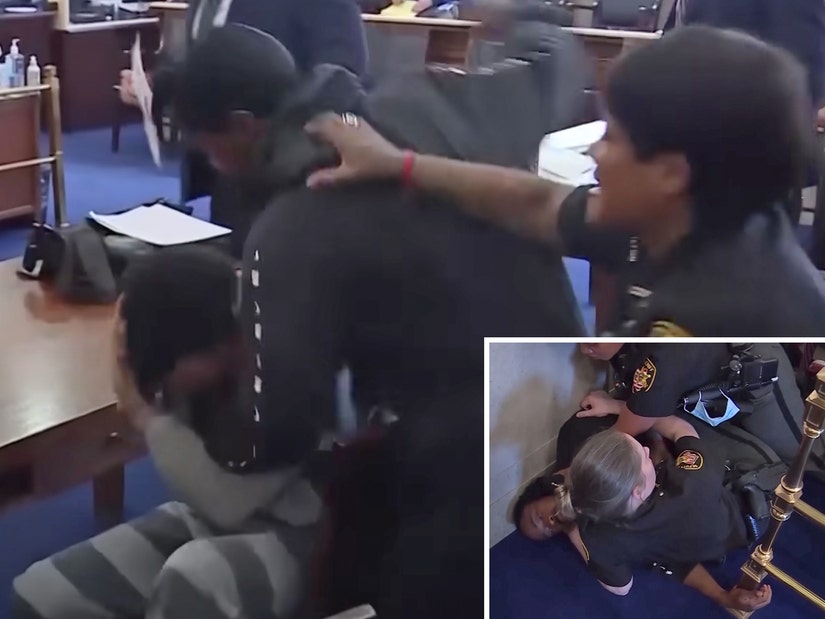 The suspect is accused of killing the boy's mother and throwing the child off of a bridge.

The father of a missing and presumed dead 3-year-old boy attacked the man accused of his murder in Ohio court last week.

After getting a few strong hits at the man's head and body, officers took Hugh to the ground and attempted to restrain him. While on the floor of the courthouse, he kept looking for Brown and tried to charge at him once again after officers stood him up. Eventually, the suspect was escorted out of the courtroom while four officers restrained Brown.

Hugh calmed down after Brown left the room and asked one of the female cops knocked to the ground if she was alright. "I'm good, I want you to be okay," the officer told him -- as other cops in the courtroom told him to "take a minute" and "breathe." The female office also told him that they "understand" his emotions and reminded him to "let the system work."

Here's another view of the incident:

Hugh was placed in police custody and found in contempt of court, per Fox 19. He was sentenced to seven days in the Hamilton County Justice Center.

Brown is accused of fatally stabbing his then-girlfriend Nyteisha Lattimore in December 2020, before throwing 3-year-old Nylo into the Ohio River off of a pedestrian bridge.

According to a timeline alleged by the prosecutors on the case, Brown is accused of killing Nyteisha on December 5, then throwing the boy into the river -- alive -- the following day, before eventually disposing of the mother's body in a body bag in the same river five days later. Her body was discovered by authorities on December 12, while a stroller belonging to the boy was found in the river on the 13th. Nylo was last seen December 4, 2020 and his body still has not been recovered.

Brown was charged with two counts of aggravated murder for both Nyteisha and Nylo and faces the death penalty.