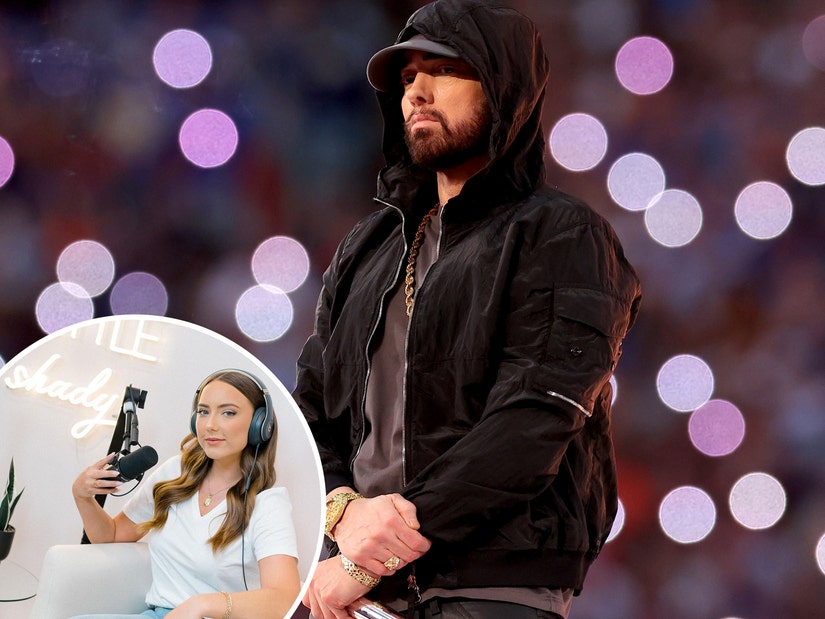 The name of her podcast: Just a Little Shady.

Eminem has been rapping about daughter Hailie Jade since the start of his career -- and now she's coming for the spotlight herself by launching her own podcast.

Hailie, 26, has been a bit of social media influencer for some time and amassed a 2.8 million following on Instagram. On Friday, she and her longtime friend Brittany Ednie dropped the first episode of their "Just a Little Shady" podcast, a project whose moniker, of course, references her famous father's Slim Shady nickname.

At the top of the episode, Jade first addressed the name ... but didn't tie it back to her dad.

"We want to start by addressing the elephant in the room, which is the double entendre in the name Just a Little Shady," she began. "On one hand, we have the aspect that I want this to be a place where I can share more about my life, talk about things I haven't talked about and just for you guys who have been with me for a long time get to know me a little better and new people get to know me a little better."

"And on the other hand," she continued, "we're also gonna be doing some hot takes on current events and talking about what's going on in the world and giving our opinion."

While she didn't give him credit for the name of the podcast, Hailie did talk about what it was like growing up as the daughter of a celebrity -- while Brittany also chimed in on being in the rapper's orbit as one of Hailie's childhood friends. The two recalled spending time on Eminem's tour bus as kids, something Hailey just thought "was normal" as a tot.

"I remember going on that and all our memories of being young were so cool and unique to look back at now," added Ednie, "but at the time felt so normal and not anything strange or different. We didn't know any better."

"This is the whole experience. We were in a normal public school, we never thought anything was different. We had so many normal experiences, that when something like that happened, I thought everybody else does that too," Hailie continued. "It's so fun to look back ... thinking back as an adult, I'm like, 'Wow, that's so, so surreal' and those memories of me thinking those were normal things, now I look back like, 'Holy crap, that was cool.'"

One specific memory that stood out for both of them was a visit they made to Florida. While Eminem had to work while they were there, he organized it so the two had princess dresses waiting for them where they were staying, before a limo picked up the girls and brought them to Disney World. Once there, they got the VIP treatment.

While Hailie recalled being "so happy and so excited" at the time, she added that it wasn't something the two really had a chance to appreciate when they were so young.

Hailie also talked about her middle and high school years, admitting that she took things "way too seriously" growing up. She explained that she didn't drink or go to parties in her teen years and thought "being associated with anyone there that was drinking, that I was going to get in trouble."

"I never got in trouble growing up. I also never did anything to," she added. "I thought that if I did anything wrong, I was a terrible human."

That was about it for personal revelations in the debut episode, as the two spent the rest of the podcast talking about jumping on the "Stranger Things" bandwagon and pop culture topics like the viral #gentleminions TikTok trend.

You can watch the full episode below: