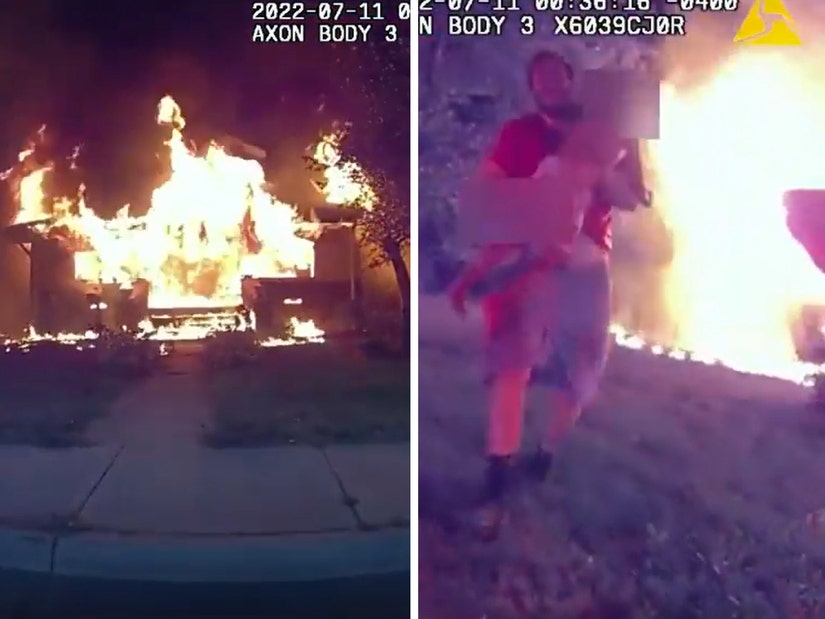 Local police hailed his actions as "heroic" -- as the man saved one of the kids by jumping with her out of a second-story window.

A 25-year-old man from Lafayette, Indiana is being hailed a hero by local authorities after rushing head-first into a fire to rescue five people trapped inside the inferno.

According to local police, they responded to reports of a house fire and, by the time they got there, found the home totally engulfed in flames. Just six minutes after they arrived, officers witnessed a man jump through the window of the home's second story with a 6-year-old child they were told was still inside.

Harrowing bodycam video from the scene shows police arriving on scene and learning a man had run toward the home to alert the residents it was on fire. Cops are then seen telling the fire department that a young girl and a man in his 20s are possibly still inside -- before the man is seen running from the burning house with the child in his arms. They then start treating his wounds as he asks, "Is the baby okay? Please tell me the baby is okay." Officers tell him, "Yes, you did good, dude."

The man was later identified as Nicholas Bostic, who suffered severe smoke inhalation and deep cuts on his right arm during the rescue. After being flown to an Indianapolis hospital for treatment, Bostic then filled in the Lafayette PD on what happened that night. "What he described was nothing short of courageous and heroic," said police in a release.

Bostic said he didn't call 911 when he drove past the fire because he "didn’t want to waste time trying to find someone who could call it in" and "knew he had to act." After yelling inside from the back door and receiving no response, he "decided to go in" and found four occupants who ranged in age from 1-18. According to Fox 59, the residents included four children and their 18-year-old sister.

"His yells of warning roused them from their sleep, and he helped them escape from the house," say police.

Once he got the first four outside, he learned about the 6-year-old still inside and ran back in. Searching "frantically" for the girl, he wound up upstairs and was about to leave through a second-story window when he heard the child crying downstairs. "He knew he was there to get that child out, and even though the fire and smoke downstairs frightened him, he would not quit," continued the release.

Though he couldn't see through the smoke and felt like he was "walking into an oven," he found his way to the child by focusing on her cries. When they couldn't find the front door, he then carried the child upstairs, punched out a window "with his bare hand" and jumped through it with her in his arms ... "ensuring he landed on the side where he was not holding the child."

"Nicholas Bostic's heroic actions saved lives," said Lafayette Police Department Lt Randy Shere. "His selflessness exhibited when he rushed into a burning Lafayette home to save children trapped inside is inspiring, and he has impressed many with his courage, tenacity, and steadfast calmness in the face of such perilous danger. "

The city went on to say that his heroics will be honored at a local baseball game next month, with proceeds from ticket sales going toward Bostic's GoFundMe page.