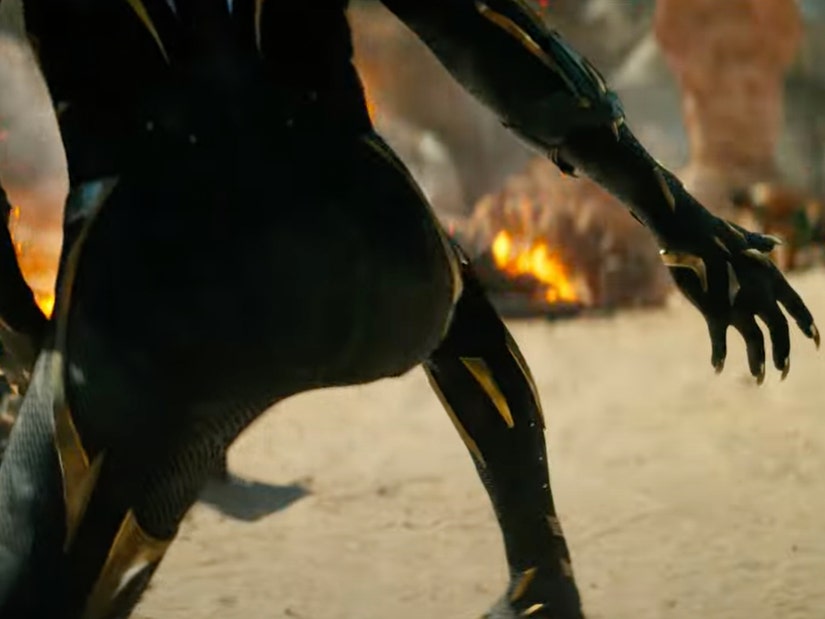 There were some major reveals, epic footage and even updates on Phase Six -- culminating in the emotional and incredible first trailer for the new Black Panther film.

For the first time in three years, Marvel Studios is back at Comic-Con for a Hall H presentation that's sure to be the talk of the entire weekend.

Heading into the event, not too much was known about what Marvel and head honcho Kevin Feige had planned -- but looking at the studio's slate, expectations were high they would barrel toward the end of Phase Four and share some Phase Five reveals.

The next movie out in theaters is "Black Panther: Wakanda Forever" -- a film which has remained shrouded in secrecy, despite dropping in November of this year. The movie has the difficult task of replacing Chadwick Boseman as the titular superhero, following his death in 2020.

The panel actually ended with "Black Panther: Wakanda Forever," but since the trailer was the highlight of the presentation, we're moving it up this post.

After a moving musical and dance performance that got everyone in Hall H out of their seats, director Ryan Googler then took the stage to speak about the five years since the first footage from the OG "Black Panther" was revealed. He recalled how excited Chadwick Boseman was when they played that trailer. "The impact that he made on this industry will be felt forever," he added, "We put our love to Chadwick into this film ... it's a roller coaster of a movie."

He explained the movie will take viewers to "new places in Wakanda we've never seen before and more corners of the MCU" -- before bringing out the cast. Joining Coogler on stage were returning stars Danai Gurira, Lupita Nyong'o, Letitia Wright, Winston Duke and Florence Kasumba, as well as a few new additions -- including Dominique Thorne as Ironheart, Michaela Coel as Aneka and Tenoch Huerta as Namor, who will introduce Atlantis to the MCU.

The panel ended with the emotion-packed first trailer for the movie, which touches on T'Challa's likely death -- as Angela Bassett's Queen Ramonda cries, "My entire family is gone ... have I not given everything?!"

The footage -- set to a beautiful version of "No Woman, No Cry" -- showed a ton of Atlantis and focused heavily on the women of Wakanda. It ended with one final tease: someone else wearing the Black Panther suit. 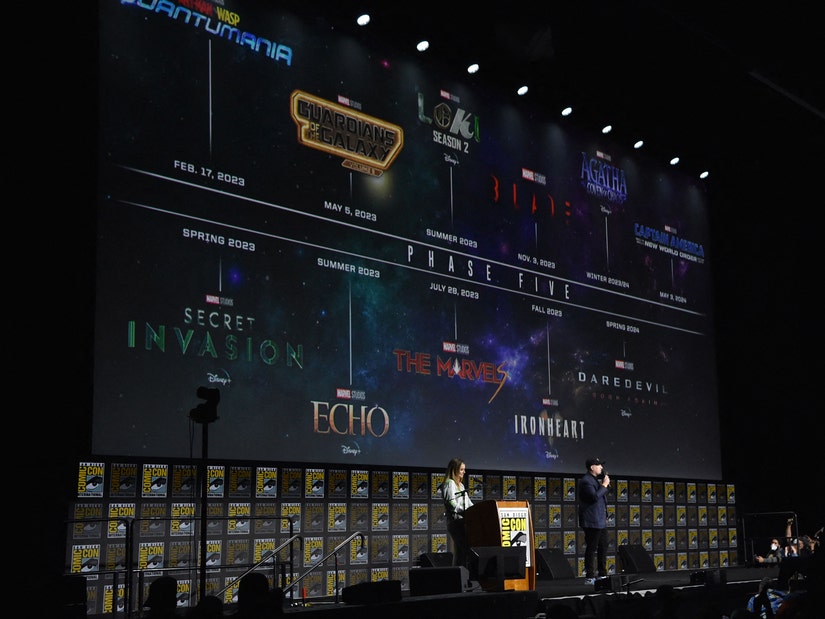 Now let's back things up.

The panel kicked off with a sizzle reel of everything we've seen before, before a sweet intro from Miss Minutes of "Loki" fame welcomed everyone to the "Comic-Con panel at the end of time." With that, Feige took the stage to thunderous applause and reminded us all that almost everything he revealed three years ago at the last in-person Comic-Con had come to fruition. He then took a look at the future, as Phase Four ends with "Black Panther: Wakanda Forever."

Then, the cast of "She-Hulk:" Attorney at Law" hit the stage to confirm that Mark Ruffalo's Hulk, Tim Roth's Abomination and Benedict Wong's Wong will all cameo. The new trailer was also shown, showing how Jennifer Walters/She-Hulk will train with her cousin, defend supes in court and face off against Jameela Jamil. The teaser ended with a Daredevil reveal, confirming Charlie Cox will likely appear in the series as well.

Up next, was "Secret Invasion," with Cobie Smulders hitting the stage to get everyone hyped for the Disney+ series. She said she was "living the dream" playing Maria Hill alongside Samuel L. Jackson, who she called "the greatest human." As for any "secrets" she could reveal, Feige allowed her to share a sizzle reel from what's been filmed so far. The tone was very much a spy thriller, with Fury returning to Earth after ghosting Maria for years in space -- it was action packed and included Emilia Clarke, Olivia Colman, Kingsley Ben-Adir and Ben Mendelsohn.

The cast of Ant-Man & The Wasp showed footage from the film, Introducing Jonathan Majors' Kang the Conquerer posing a VERY bit threat to the gang. pic.twitter.com/xoWbpdLV22

Then came the first MCU film of 2023 and the first film in Phase Five, "Ant-Man and the Wasp: Quantumania," which finds Paul Rudd and Evangeline Lilly back in their titular roles -- alongside returning stars Michael Douglas and Michelle Pfeiffer. Jonathan Majors' Kang the Conquerer -- who was introduced on "Loki" -- also joins the cast, as does Kathryn Newton, who takes over as Cassie Lang, Scott's daughter.

Rudd, Lilly and Newton were all on hand for the panel, as was director Peyton Reed, who teased, "we finally get to spend some time in the Quantum Realm" in the new movie -- which will also introduce "a lot of new characters." Added Rudd: "Scott is pretty pleased with himself and his role in saving the universe."

Netwon, meanwhile, teased "difficult odds" for the group of superheroes -- and said that Cassie would be figuring out who she's meant to be, before Reed debuted some footage from the flick. The footage, sadly, won't be released online just yet.

The clip started with Scott reading his new memoir, "Look Out for the Little Guy," to a group of kids -- before it's interrupted by a call from jail, where his daughter had spent a night behind bars. She too, it seems, wants to save the world in her own way -- to the dismay of her dad. The entire Ant-fam is then sucked into the Quantum Realm -- somewhere where Janet clearly feels very at home. She even has old friends there, including one played by Bill Murray. The footage also Included a shot of M.O.D.O.K, before ending with a very menacing shot of Majors all suited up in black -- who tells Scott, "I've killed you before."

Chris Pratt and the Guardians of the Galaxy showed some footage, which teased Rocket's origins and Peter in "pain" after losing his Gamora. It's being called the end of the story James Gunn planned to tell when he first signed onto the MCU. pic.twitter.com/CFwh3nkIdx

James Gunn then hit the stage for "Guardians Vol 3," which, has been teased by cast members as the end of a trilogy -- something Gunn confirmed, adding, "it doesn't mean everyone dies." He then showed some footage, which kicked off with Gamora having joined the Ravagers, as Star-Lord tries to make her remember their time together. "That person, it wasn't me," she says, before a ton of footage teasing Rocket's origin story, a lot of crying and Will Poulter's Adam Warlock.

"This is the full story, where I always intended to go," said Gunn after playing the footage, saying the movie will make us realize Rocket is "the saddest creature in the universe." Pratt confirmed "the pain" of losing his Gamora is a big part of his journey in the film, saying "it opens up a vulnerability to the Guardians of the Galaxy to danger." Karen Gillan said to expect some "levity" from Nebula this time around, as she forms the personality she should have had if not for Thanos. Maria Bakalova, meanwhile, was thrilled to be with the group -- joining the cast as Cosmo the Spacedog. "I hope you love Cosmo, because she's going to bring lots of laughs and love and a bit of strength," she added.

Chukwudi Iwuji also showed up in full costume as the High Evolutionary, someone who has a connection to Rocket's past. Taking the mic, in character, he said his goal in life to was take "un-evolved low life scum ... and enhance [them[ genetically to something less reprehensible."

The cast was very emotional on stage, as they hadn't seen the footage yet themselves and were clearly a little sad that their story could be over. At least with the Guardians as we know them.  Gunn closed out his time on stage thanking the fans for all their support, saying he can't wait to share the movie with everyone.

Fiege also confirmed Phase Six will begin with "Fantastic Four" and end with "Avengers: The Kang Dynasty" and "Avengers: Secret Wars" -- wrapping up what is being called "The Multiverse Saga."