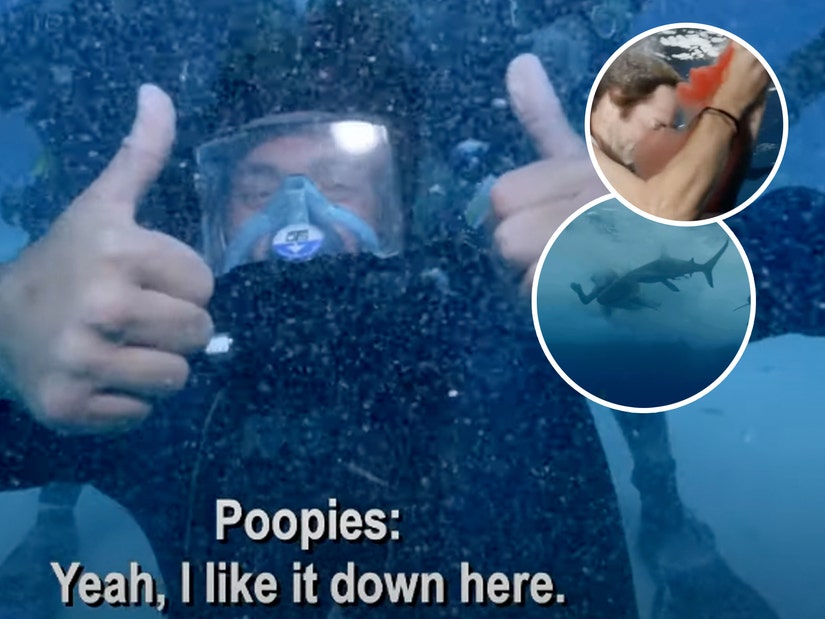 Poopies got emotional as he recalled his attack, as bloody new footage from the incident was shared for the first time.

Johnny Knoxville and the boys of "Jackass" returned for Shark Week for the second year in a row -- this time with a mission to get Sean "Poopies" McInerney "back in the water with the sharks that defiled him."

In case you missed last year's Shark Week, McInerney was hospitalized after being swarmed during a stunt in which he was supposed to pull a Fonzie from "Happy Days" by literally "jumping the shark" on a wakeboard. When he landed on one, however, he was bitten.

"That moment a year ago, I pretty much left my brain on the boat. I knew it was dangerous, trying to jump the sharks like Fonzie," he recalled on this year's "Jackass Shark Week 2.0," which aired Sunday night. "When I was going off that ramp, I pretty much got launched right into a shark pit."

Rewatch the moment in question from last year below:

The new special showed some "never before seen footage of a graphic shark attack," in which the sharks were seen really going after Poopies under the water.

"It felt like a bear trap with razor blades on it," he recalled, admitting that the stunt was a "total mistake." He added, "we were doing the dumbest stuff and that's why I got bit and, hey, you land on a shark, you're gonna get bit."

Getting choked up, he called the experience "pretty heavy," wiping tears from his eyes.

The man who rescued him was on the new special as well, saying he tried to make as big a splash as possible when he jumped in to save McInerney -- hoping to scare them off. He called Poopies' injury a "double squirter," which meant he had two pints of blood. The stuntman was rushed to the hospital and into surgery, after severing multiple tendons and muscles.

Showing off his injuries, Poopies said he's still in PT two days a week and is still in recovery.

"It's getting there. I just thank god every day. Mike saved my life, I owe my life to Mike," he said of his ocean rescuer. "Now I'm on Shark Week 2, I can't even believe this is happening."

Throughout the new hour, he first went back in the water in a cage, before the entire group -- including Knoxville this time -- went down to the bottom of the ocean floor together for a free swim. Though he was "nervous and scared," Poopies was confident it was going to be a "good dive."

"A year ago, when I was going off that ramp, we were in their territory, I got bit," he said before jumping in. "But it's really important for me to get over that fear, because I don't want that accident to stop me from doing what I love and I love the ocean, and I love surfing. I'm never gonna stop."

Initially, he was a bit overwhelmed under the water, exclaiming, "They're everywhere. They're coming right for me ... this is crazy. Guys, I'm freaking out!"

But then he settled down, as they all started joking about seeing the same shark which previously bit him.

"He said, 'We're all good Poopies,'" cracked McInerney. "I can see that one, he's having a great time, having more fun than anyone else."

Getting out of the water after the dive, he was proud of what they'd just accomplished.

"Holy moly, I did it! I definitely have to have a respect for those sharks. I feel a lot better," he said. "I don't have a fear of like dying when I'm next to sharks anymore."

Adding that if the rest of the cast hadn't joined him, he "wouldn't be down there," Poopies exclaimed, "Shark Week 2, we all survived, we're going home with no medics."

Shark Week is running now on both Discovery and discovery+