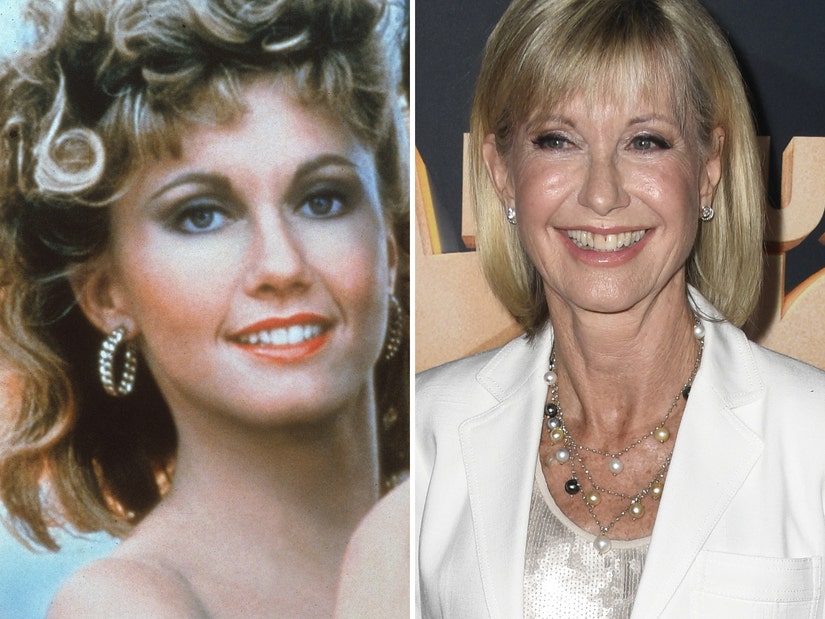 "Grease" star and four-time Grammy winner Olivia Newton-John has died. She was 73.

Her husband John Easterling released a statement on Monday, August 8, confirming her death -- saying she "passed away peacefully at her Ranch in Southern California this morning, surrounded by family and friends."

"We ask that everyone please respect the family's privacy during this very difficult time," he added. No cause of death was revealed, but a source told TMZ, that "After a 30-year cancer journey, she lost her battle to metastatic breast cancer."

In addition to her husband, the actress is survived by her daughter Chloe Lattanzi, sister Sarah, brother Toby and her nieces and nephews.

Australia-born Newton-John first found success in the United States as a country artist, but reached new heights following the release of "Grease" in 1978, in which she played good girl Sandy alongside John Travolta. Both the film and its soundtrack were massive successes.

She followed up that film with her album "Totally Hot," before the soundtrack for "Xanadu" also became a huge hit. While the movie itself was a critical and commercial flop, it has since become a cult classic. Newton-John's most successful album, "Physical," would release the following year in 1981.

She continued to release music and act throughout her life, appearing as both herself and in character on projects including "Sordid Lives," "Sharknado 5" and "Glee." She also appeared on reality shows like "RuPaul's Drag Race," "American Idol" and "Dancing with the Stars."

Throughout her career, Newton-John has also been very open about her battle with breast cancer, for which she was first diagnosed in 1992 before it returned in 2013. In 2017, she was told that it had metastasized and spread into her bones.

Following her death, celebrity friends and fans turned to social media to share their tributes. Among the first to react was her "Grease" costar John Travolta, who wrote, "My dearest Olivia, you made all of our lives so much better. Your impact was incredible. I love you so much. We will see you down the road and we will all be together again. Yours from the first moment I saw you and forever! Your Danny, your John!"

Newton-John's daughter Chloe Lattanzi also shared a carousel of photos of the mother-daughter duo, without caption.

Sweet Olivia has gone home. She was a beautiful soul and I know of no one who didn’t love her or know what a great humanitarian she was. The world is out of balance when we lose these magnificent people. God speed Livvy. We will all meet again ❤️❤️❤️ @olivianj 💔💔💔 pic.twitter.com/8tV5j8XvII

My heart is broken. Rest now, sweet friend. You were as kind and loving a person as there’s ever been. I’ll miss you every day. 💔 pic.twitter.com/Z1zkVe9CVb

Another angelic voice has been added to the Heavenly Choir. Not only was Olivia a dear friend, but one of the nicest people I had the pleasure of recording and performing with. I will most definitely miss her. She now Rests in the Arms of the Heavenly Father 🥲🙏🏾♥️

Like so many, Olivia has always been my hero. Discovering her magnetic energy as an artist and actress came first but it was her heart that truly captured mine. Forever an icon and legend! pic.twitter.com/8RDc0hzIgW

"Grease" is my #1 movie of all time and made me a lifelong Olivia Newton John fan. Me and my sister watched Xanadu more times than I could count. Sending so much love and prayers to a real gift of a woman and talent. #RIPOliviaNewtonJohn 🙏🏾🙏🏾🙏🏾🙏🏾 https://t.co/1M8lcVQuON

For Olivia ❤️ I love you. You were everything to me. Thank you for all you did for the world. I’m so sorry you’re gone too soon. I’ll forever cherish the note you left me backstage at Wicked. #hopelesslydevotedtoyou pic.twitter.com/rU5FWDQQJH

I am SO saddened at the news of the passing of Olivia Newton John. I remember being so star struck when I met her at my first Hollywood gathering for Paramount. She was the sweetest and brightest light and I loved getting to know her on "It's My Party." RIP dear, sweet Olivia. pic.twitter.com/4FFgolVQNk

We have lost a great, iconic artist in Olivia Newton John, gone too soon from us at age 73. I trust she is now in the great Xanadu beyond. Know that we are forever hopelessly devoted to you, Olivia. Rest in song and mirth.

Very sad that lovely, talented, brave Olivia Newton- John has died. I never got to meet her, but everyone says she was wonderful- always kind.

Very sad news. Great admiration for how she bravely faced breast cancer. Condolences to her loving family and friends. 🙏🏾💕 https://t.co/O5xuNjbAx4

Really sad to hear about the passing of Olivia Newton-John. My first real crush as a kid. I loved Grease & her music & I coincidentally also bought & lived in for a while the wonderful home she built in Malibu. May she Rest In Peace. ❤️ https://t.co/gP10SJWqFZ

Devastated to hear this news. I loved Olivia. ❤️ https://t.co/2nOSGYx0Y0

Olivia Newton-John has died. 💔 That’s it. I’m done guys. Heartbroken doesn’t even BEGIN to cover it. I ADORED her.

Rest In Peace Olivia Newton-John❤️ Love you. xoxoxo Sending my deepest heartfelt condolences to all her family and loved ones. https://t.co/lQNmFACBP8

Along with having one of the most gorgeous, effortless voices in pop music. One of my first pop obsessions. RIP icon. ❤️

Farewell with love to the legend who will forever be my first crush. Rest In Peace, Olivia Newton-John. 🥲🙏🏼👼🏻 https://t.co/IDdhwtoiDX

Grease is the word. Thank you for your gifts #OliviaNewton-John pic.twitter.com/oejcS2t54C

RIP Olivia Newton-John
Thank you so much for wonderful music and fun memories. pic.twitter.com/QBUnxEgmtn

Olivia Newton John so completely dominated the charts and Top Of The Pops when I was a kid, it felt like she WAS pop music. And yes, Xanuda is still a stone cold classic song. RIP x pic.twitter.com/k8wR1bi5G0