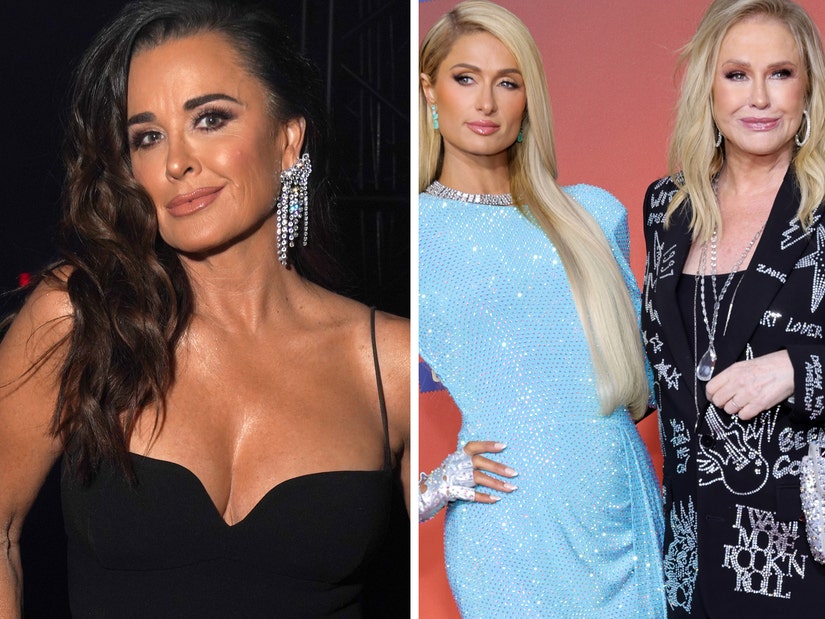 Appearing on WWHL, Kyle admits the upcoming reunion is "gonna be difficult with my sister."

The most recent season of "The Real Housewives of Beverly Hills" is causing some serious drama between sisters Kyle Richards and Kathy Hilton ... as well as Kathy's daughter Paris Hilton.

So far, there hasn't been too much friction between them, though last night's episode and a preview for next week did hint at the source of the frustrations. On Wednesday's hour, Kathy tried to use the show to push a line of tequila she and her daughter Nicky were investors in, but Kyle kept interrupting her pitch to the other women.

A preview, meanwhile, showed Kathy storming out of filming after Lisa Rinna ordered Kendall Jenner's 818 tequila at a bar. Exclaiming she was "f---ing pissed off," Hilton said she felt Kyle wasn't doing "a f---ing thing" to support her.

This feud SCREAMS Beverly Hills💀 A feud because of Kendall Jenner’s tequila over Kathy Hilton’s tequila. The dramatics 😭😭 #RHOBH pic.twitter.com/mPtE1tqQdJ

Appearing on "Watch What Happens Live" after the episode aired, Kyle insinuated she and her sister weren't on great terms after a caller asked who she was "least looking forward" to seeing at the reunion, which tapes this Friday.

"Oh my gosh ... so many. I didn't end on the best note with ... it's gonna be difficult with my sister, we went through some hard times on the show," Kyle admitted. "I've had some issues with Erika and Rinna toward the end and I had some apologizing to do to Garcelle, which I already did, so I think we're okay."

When Andy Cohen said it was going to "be a long, long shoot" on Friday, Richards agreed.

"Next to Season 5 [in which she had drama with her other sister, Kim], this is the reunion I'm the least looking forward to," she continued -- before adding, "I never look forward to any of them by the way."

So far, Kathy has remained mum on the feud, but her daughter Paris has been posting and liking a few snide comments about her aunt Kyle and the rest of the cast on Twitter.

After one viewer commented on the awkward scene of Kathy pushing the tequila, Paris quote tweeted it and added, "So unkind" (below). Denise Richards also responded to Hilton's tweet, writing, "I felt bad for her you could see her feelings were genuinely hurt & the preview with rinna going out of her way to take a dig."

Over the past few weeks, she's also liked a number of posts shading the women, including one saying "everyone promotes their new businesses" on the show and "Kathy deserved respect" for doing to too ... and another calling the cast "evil and ugly."

See some of the posts she's liked below:

I felt bad for her you could see her feelings were genuinely hurt & the preview with rinna going out of her way to take a dig.

Everyone promotes their new business or new clothing line, etc. It’s their time to do so and everyone is supportive. Kathy has that opportunity and that … Kathy deserved respect.

It’s funny how Rinna gets multiple scenes dedicated to her beauty & wine brands, Mauricio has The Agency featured in every outfit, but Kathy wants to promote her family’s tequila and they all dismiss her. They all use the show for promo, so it’s rich to think she shouldn’t.

The only intelligent housewives of #RHOBH who have morals and see through @erikajayne illegal, unethical, narcissist failure to rtn victims 💰 and then covering up w lies. Only @SuttonBStracke @GarcelleB @KathyHilton should return to @BravoTV #RHOBH @Andy Fire Kyle, Erika, Rinna https://t.co/nWAxYwDdav

It just came off so hurtful and dismissive. I seriously feel so bad for Kathy. She didn’t deserve to be treated like that. It felt deliberate and mean 😣

Mauricio is so rude to @KathyHilton
Why does he act like he hate her so much? #rhobh

She previously liked one tweet calling Kyle "a s---ty sister" who was "so clearly trying to sabotage Kathy's tequila scene" and another criticizing Richards for putting her sister in a bunk bed during their Aspen trip -- both of which TooFab saw and were captured by the Queens of Bravo Twitter page.

Paris, however, has since removed her likes from the posts.

As Kathy & Kyle’s drama over Tequila-Gate approaches on next week’s #RHOBH, Paris is liking some tweets tonight 💀 pic.twitter.com/B7eC99XyAY