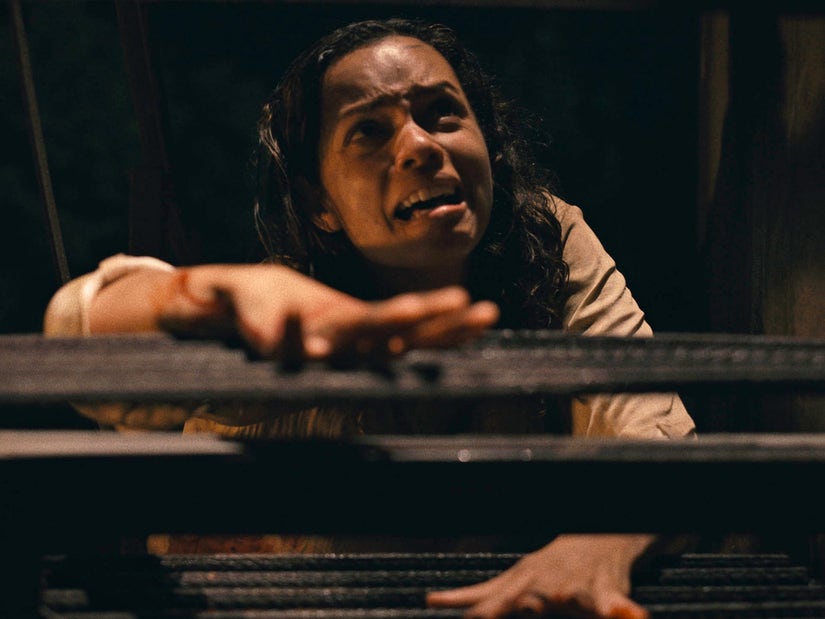 See who was hiding under all those prosthetics and what inspired [SPOILER'S] look.

"Barbarian" opened at #1 at the box office this weekend, making $10 million while both scaring the audience and leaving them screaming "WTF!" at the screen at the same time.

We're about to dig into some serious spoilers here -- and if you haven't seen the movie, we recommend going in as blind as possible, so stop reading now! If you have watched it, however, keep reading for our interview with director Zach Cregger, as he explains how that big reveal came about. 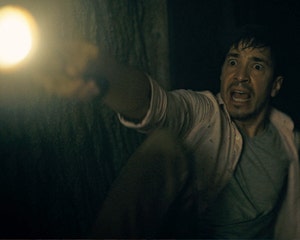 The marketing for the film has been pretty smart, focusing mainly on footage from the first act of the film -- as two strangers show up to the same Airbnb the same night. Despite some hesitation, Tess (Georgina Campbell) winds up staying with Keith (Bill Skarsgard), who viewers initially suspect is a bad guy in sheep's clothing. However, something far more sinister is at play here -- which the two discover when they venture into the basement and are attacked by a hulking naked woman.

When the home's owner, actor AJ (Justin Long), also retreats to the house following a #MeToo scandal, he finds himself in the tunnels beneath the abode as well and comes face to face with a deformed woman dubbed "The Mother." Through flashbacks to the '80s, viewers learn the home's original owner, Frank (Richard Brake), abducted neighborhood women, held them captive, sexually assaulted them, before generations of incest underground, where he and The Mother -- one of his children -- continued to live to this day.

In the end, AJ and Tess escape the caverns with The Mother on their tail. AJ proves himself to be the actual "Barbarian" in the film, however, as he attempts to sacrifice Tess to save his own hide ... only to be killed by The Mother in the movie's final moments. Tess comes out victorious, while everyone else dies. Pretty twisted, right?

Speaking with TooFab, director Zach Cregger revealed how The Mother first came into the script and opened up about actor Matthew Patrick Davis, who plays the giant woman on screen. He also revealed why one gross-out scene they filmed was left on the cutting room floor.

You say you never set out to write a horror film. At what point did The Mother and Frank come into the idea and how did you flesh them out?

I didn't know The Mother existed under the house until she appeared. I thought I was writing the movie where Bill is bad. I was down under the house and was like, Okay, whatever he's going to do, he should do it soon. I can't toe this line anymore so what's it gonna be? And there's nothing I could have this character do that the audience is not gonna see coming. I was like, the only thing that's going to surprise the audience at this point is if a giant naked lady came out of the dark ... and then I was off to the races.

But then it was over, it was the end and I had a 45-page short film that I knew I was never going to shoot, so I was done with it for a couple of days and I couldn't stop thinking about it. So I came up with another path in and the polar opposite of that chapter -- about a woman being hyper-vigilant and hyper-aware -- would be a man who had no awareness, who was oblivious to the damage he was doing to the world around him. So I figured I could have them both pass through the same crucible and that would be a good structure for the movie.

Can you talk a little about coming up with The Mother’s design too?

I was pretty clear on it from the beginning. There's a painting of Saturn Devouring His Son [by Francisco Goya] and there's a Beowulf illustrated book for children that I had as a kid and there's an illustration in that book of Grendel's mother and it really stuck with me and it looks just like my mother in the movie looks. Grendel's mother looks just like this, the very tall, muscular, naked, alabaster woman with tangles of dark hair and its terrifying. When it came time to talk to my team about what she would look like, I just showed them that image and I was like, we're doing this, this is it. 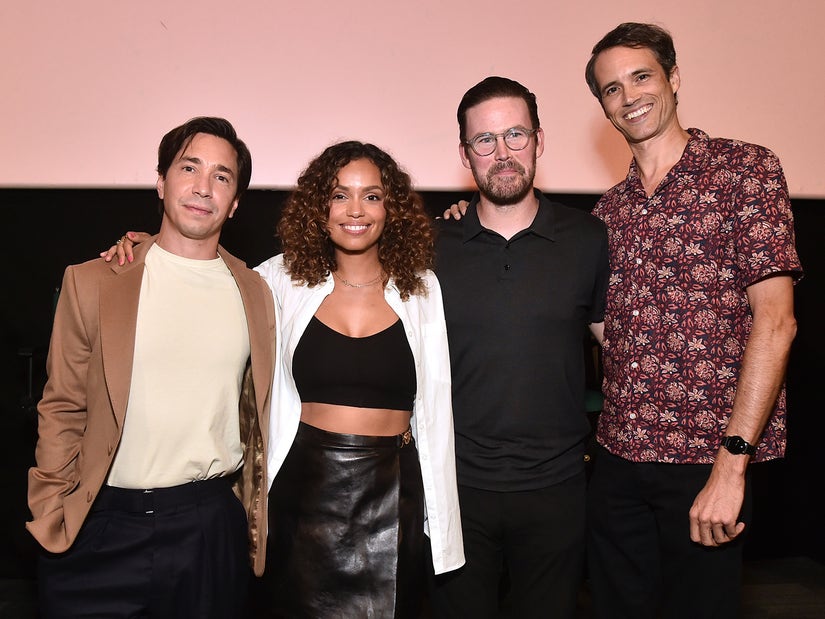 Can you also talk about casting the part. I think people be surprised when they Google who's under all the prosthetics after and see Matthew Patrick Davis (far right, above).

Matthew, by the way, is like the most gentle, sweet, lovely man. He does like Jim Carrey impersonations. He writes children's music, professional. It's like if you got Raffi, it couldn't be more against type. He took it seriously though and it's really important to me that the mother is a human and not a monster. I don't see her as a monster. To me, she's an innocent.

She's a product of her environment.

Yeah, and I think Matthew saw her the same way and we had a lot of conversations about it. If the movie ended when the mother was killed and the audience claps like, 'Yeah, she's dead!' then I've failed. It needs to be this abrupt, bittersweet, awww. That's what you want.

We're definitely rooting for Justin to get it by the end.

During a Q&A we were at, you talked about a "baby bird" scene being cut from the film. Do you think it's something we'll ever see?

Let me tell your audience about what that was. There's the scene where Justin was being force-nursed and he refuses to latch and so I wanted to escalate things, so I had the mother snatch up a rat nearby and she bites it in half, chews it up, pries his mouth open and baby birds it into his mouth. Justin and Matthew were such good sports, they both went along with it and it looked great. It really was revolting. But then I came to the realization in the edit that you don't want to see the shark too early in Jaws and there's no way to show this sequence without getting really up close to the mother and her face. We just thought it's scarier to not see her, we took that scene out. I think it plays better, I'm sad to see it go, but that's making movies.

I'm writing another horror right now and it's much stranger -- it's way, way more complicated and weird than Barbarian. I don't l know if I'm going to pull it off. We'll see. I just want to continue to make surprising horror movies. I don't care if they're funny or not, I just want them to not be boring. To me, the only thing I'm looking for in any movie of any genre is to not be bored and I'm bored by so much of what I see. If I can make a movie that's not boring, then I've won. That's good enough for me at the moment.

"Barbarian" is in theaters now.