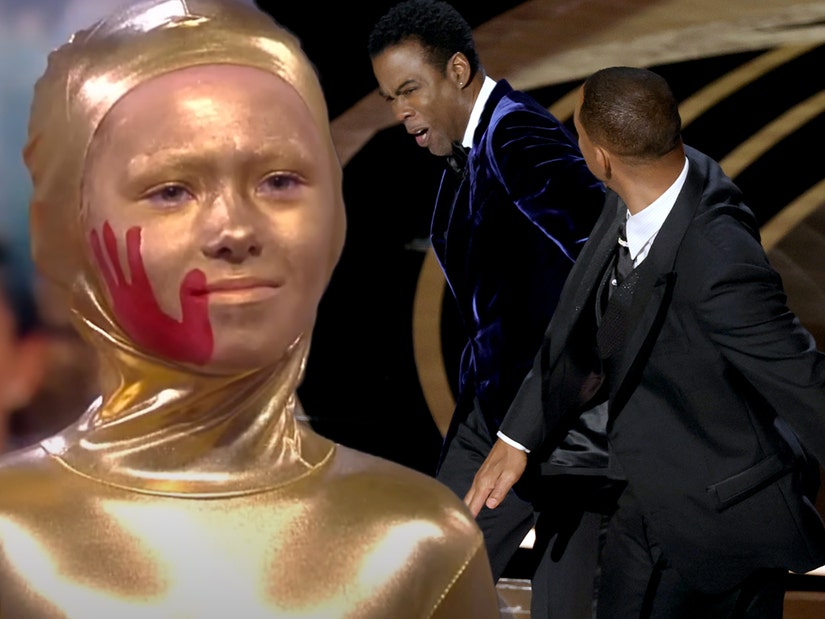 "What was that Chris Rock costume??? 'I don't want to endorse violence but here’s a costume endorsing violence.' DO BETTER!!"

"The View's" Halloween episode is receiving criticism over a controversial costume ... and it wasn't one worn by any of the show's panelists.

A segment on Monday's episode of the daytime talk show featured children dressed up in costumes based on some "Hot Topics" stories from the past year, with kids wearing Halloween costumes ranging from Donald Trump's Mar-a-Lago FBI raid to the discontinuation of the Choco Taco to the infamous Oscars slap.

But it was the latter that didn't go over well with many viewers and sparked backlash online.

During the segment, "The View's" wardrobe adviser, Ashley Alderfer Kaufman, introduced each of the kids, and described their costumes. The Oscars slap costume was the grand finale, with a young child entering the stage wearing a gold body suit -- likely to resemble an Oscars statue -- and was covered with gold face paint. They also had a red handprint on their face, which was undeniably a nod to Chris Rock slapping Will Smith across the face.

"This year, the Oscars made huge headlines, but it really, it wasn't about who won," Kaufman said as the kid made their entrance. "It was about what happened with Best Actor, Will Smith, when he went up and slapped Chris Rock. Now, we do not want to endorse violence of any kind but we couldn't help but talk about one of the hottest topics this year."

However, according to some viewers, the costume did, in fact, endorse violence. Many social media users called out "The View" on Twitter, slamming Kaufman and the show for the kid's costume.

"Bad taste on the Oscar slap. You did validate violence Ashly," a person wrote, while another added, "What was that Chris Rock costume??? 'I don't want to endorse violence but here's a costume endorsing violence.' DO BETTER!!"

Another user pointed out, "Difficult to keep up with everything but the red handprint on one's face is the symbol for missing and murdered Indigenous women and girls. Too bad no one was able to flag this costume idea in advance."

See more reactions to the slap, below.

why did The View dress this child as "the Oscars slap" pic.twitter.com/K6Si4OK3Ar

@TheView Difficult to keep up with everything but the red handprint on one's face is the symbol for missing and murdered Indigenous women and girls. Too bad no one was able to flag this costume idea in advance. #MMIWG #TheView

Bad taste on the Oscar slap. You did validate violence Ashly.#Theview

@TheView What was that Chris Rock costume??? “I don’t want to endorse violence but here’s a costume endorsing violence.” DO BETTER!! #theview

Not a fan of that Oscar slap costume. #TheView

Not The View making a child dress up like WILL SMITH SLAPPING CHRIS ROCK AT THE OSCARS??! pic.twitter.com/t6jXLnnXLv

The Oscar Slap for a hot topic for Halloween on the view? Next time just pass on this suggestion! Otherwise great Halloween costumes! #theview

Following the Oscars back in March, "The View" hosts shared their reactions to the slap, Sunny Hostin calling Smith's slap "a show of toxic masculinity."

Hostin said she was "embarrassed" for Smith and "horrified" for Rock. She then continued to go in on the former, saying that the actor was "immature," "childish" and "violent."

Ana Navarro noted that while Rock's joke was "in very poor taste," she stressed that "nothing, nothing, nada, [z]ero, condones violence in this form," while Joy Behar said "comedians are in danger everywhere," but noted that to "actually hit somebody was shocking, quite frankly."

As for Whoopi Goldberg, she expressed that she believes "there was a lot of stuff probably built up," noting how since 2016 there has been a lot of jokes about Smith and Jada, specifically about their marriage.

"I think he overreacted," she explained, before adding, "I get it. Not everybody acts the way we would like them to under pressure. Some people just snap. He snapped. What I do wanna say is I think it's remarkable and wonderful that Chris Rock did not take it to that other place it could have gone."