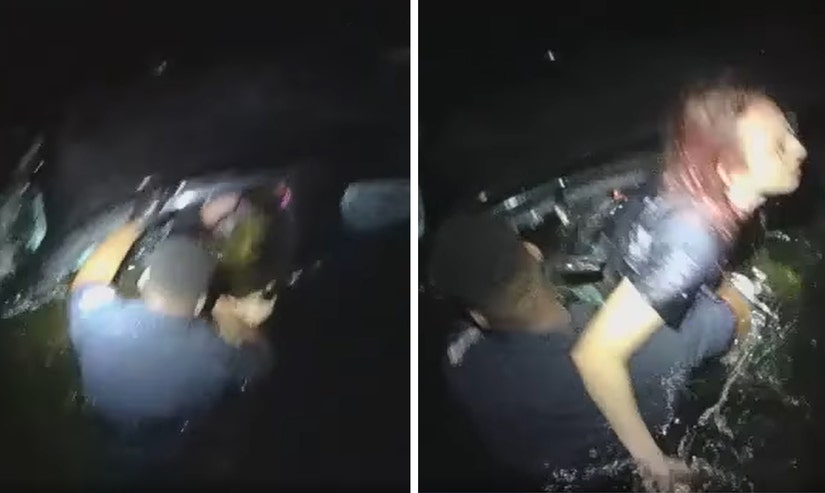 The driver went through a cul-de-sac straight into the canal.

A woman in Cape Coral, Florida is safe after a police officer jumped to action to rescue her from her sinking vehicle.

The incident went down around 3:00am on Tuesday morning, after the woman's car was seen on home security footage driving into a neighborhood cul-de-sac, going over the curb and pausing before continuing straight into the canal at the end of the street.

According to NBC 2, the woman's boyfriend allegedly told witnesses she had called him, before calling 9-1-1 while trapped in her car.

Police bodycam footage from the scene shows one officer asking another for their baton, before directing them to hold up a light toward the sinking car and jumping into the water to free the woman. She can be heard screaming inside the vehicle.

As he breaks the driver's side window with the baton, he tells her, "Try to get out," before pulling her from the car. On the embankment, she continues to cry, while cops ask if anyone else is inside the submerged car. "No, there's nobody else in the car but me. It's just me," she responds, before exclaiming, "My car!"

"It's just a car," one of the officers tells her, while she says she's not hurt, "just scared."

"Without hesitation, Officer Kwesi Johnson jumped into the canal, busted out the driver's side window, and rescued the female from the sinking vehicle," Cape Coral police said in a statement shared to Facebook, along with the video. "Please watch this fantastic rescue! Officer Johnson is a true hero in blue."