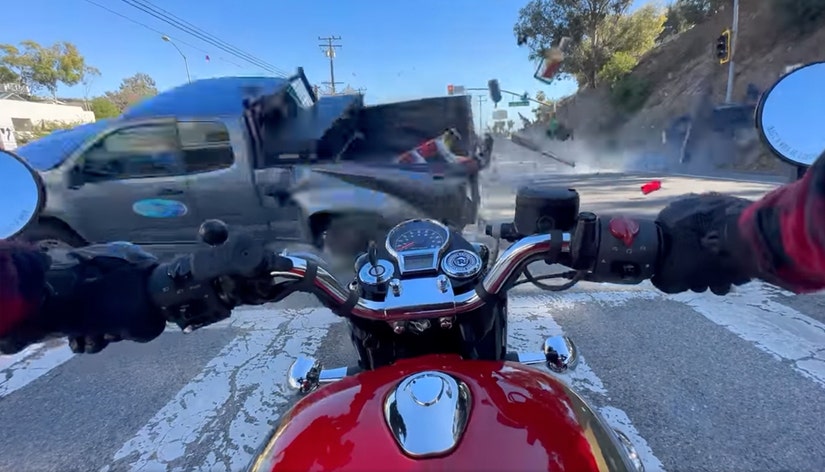 The moment a pickup truck went flying toward Stephen Levey as he sat on his motorcycle at a red light was captured on camera -- and it's a terrifying video to watch.

Levey shared the footage from his body-mounted camera to Facebook, after he survived an accident Monday in Malibu in which a speeding car allegedly stolen from a nearby rehab facility crashed into a truck, which then flipped and barreled into the motorcyclist.

The camera cuts at the moment of impact.

"Hi everyone, I am the innocent motorcyclist who was just sitting at a red light minding my own business when out of nowhere i recorded my near death," Levey wrote on Facebook alongside what he described as the "very disturbing" footage.

"I was airlifted to the nearest trauma hospital as which point it was apparently very much in doubt if I was going to live," he continued. "I ended it up with a shattered right arm and I am now the owner of a bunch of titanium I did not ever want, 9 broken ribs, an extremely damaged right foot, a collapsed, lung and a wide variety of other issues along with a lifetime of trauma."

He said the yet-unidentified driver of the reportedly stolen car was killed in the crash, which the LA Sheriff's Department also confirmed to NBC 4 News. "I shouldn't have lived through that," Levey also told NBC. "As bad as things are and without being dramatic, they're pretty bad, boy things could have been worse."

He added that he woke up with no memory of the crash, but remembered he had his camera recording at the time.

"I had the nurses bring my phone to me and then went to the very last thing that was recorded," Levey said. "I have no recollection of the accident. It's not like I could brace myself knowing what happened."

Levey has started a GoFundMe page to help pay for the "financial burden" of his medical costs.