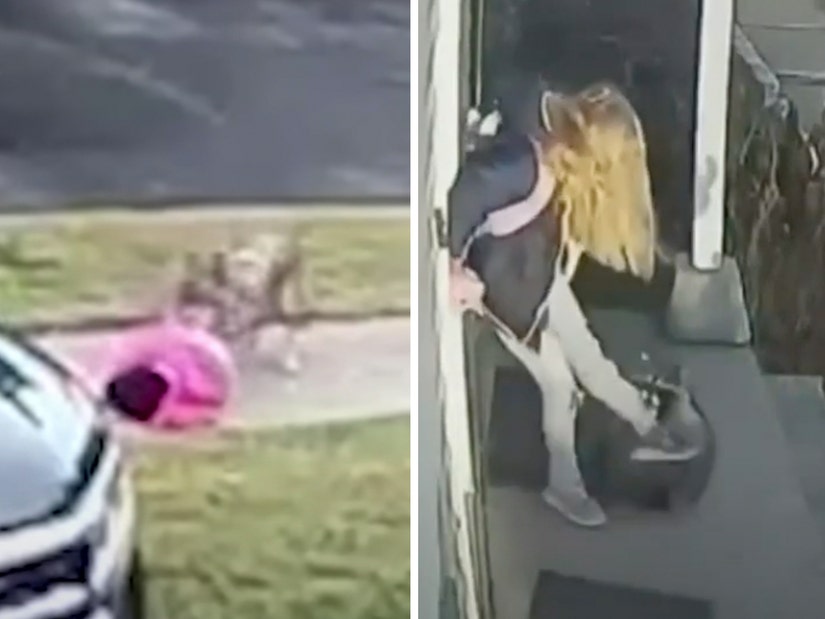 "I thought maybe she slammed her finger in the door. I definitely wasn't expecting to see a raccoon wrapped around her leg," said one mom who jumped into action.

Two terrifying animal attacks on children were caught on camera over the weekend -- and in both cases, their parents wasted no time jumping between their kids and the pair of threats.

Security footage from Friday in Woodland Hills, California shows a two-year-old girl in her front lawn, when a coyote grabs her by her clothes from behind, pulls her to the ground and starts dragging her away as the child screams in terror.

Her dad is then seen running toward them, screaming, "Go! Go!" as the wild animal drops the kid and backs away.

The father then grabs something and throws it at the coyote, which finally retreats.

The girl's mother told KTLA that the child had scratches along her left leg, one of which was "really deep," and added they took her to the ER to get her a rabies shot. "Her face is also a little bit bruised," added her mom.

While KTLA was in front of the family's home reporting on the story later that evening, a coyote actually appeared ... and was chased back into the bushes.

In Friday morning in Ashford, Connecticut, meanwhile, another animal attack was caught on a family's home security camera on their front porch -- after Rylee MacNamara stepped outside to catch the bus.

"I was going out to get on the bus and a raccoon was there and tried to attack me," the child told WFSB, as footage shows her trying to shake the creature off her foot as she struggles to get back inside the house.

As she screams, her mother runs outside, grabs the animal from Rylee's ankle and gets her daughter to safety. "It's a rabid raccoon! Get help!" she yells, before tossing the animal into her lawn and running inside. The raccoon ran off and hasn't been located by animal control.

"I thought maybe she slammed her finger in the door. I definitely wasn't expecting to see a raccoon wrapped around her leg," the girls' mother told reporters.

Both of them were bitten by the raccoon and given rabies shots.