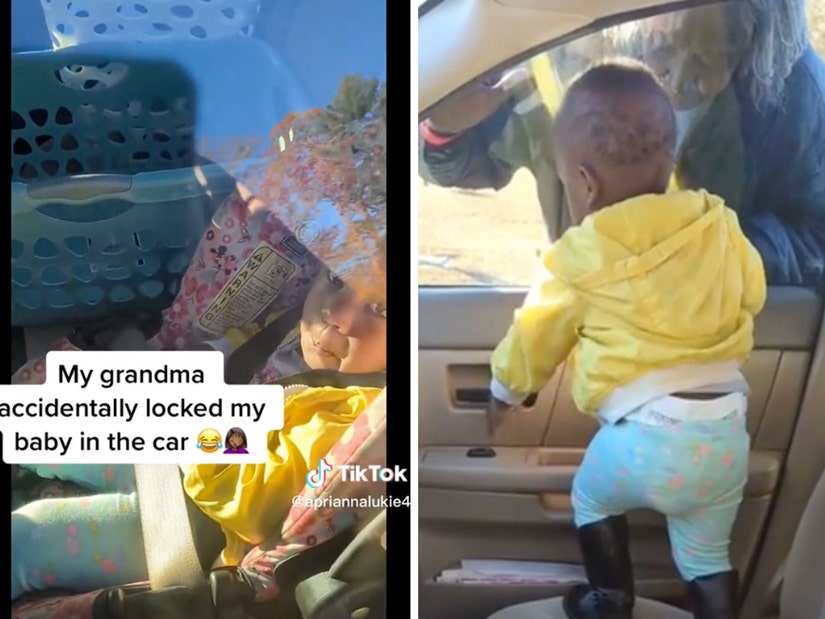 "My grandma accidentally locked my baby in the car," the child's mom captioned the video on TikTok.

An adorable 1-year-old girl in Greenwood, South Carolina rescued herself from a locked car as her mom and grandmother watched in awe.

Aprianna Lukie reportedly parked at a local cemetery with daughter Z'Naria and her grandmother, leaving the keys in the ignition as she got out of her car to get her baby out of the backseat. Lukie says she told her grandma to unlock the doors, but she instead locked them -- before getting out of the car herself and closing her door behind her.

"My grandmother started to panic and wanted to call for help," Lukie told Newseek, explaining that she thought "opening the door would be easy" for the baby, who she believed "could wiggle her way out of her car seat" after realizing she was "strapped improperly" into it.

She then hit record and filmed herself and her grandmother trying to coax the child to the front seat, where the front doors would open just by pulling on the latch.

"Get out your seat and open the door for us," Lukie can be heard telling her daughter in the footage, which she shared to TikTok. Little Z'Naria can be seen tripping her way into the front passenger seat, before her grandmother gets her to open the door. "My baby's smart!" Lukie exclaims as they gain entry.

While the moment Z'Naria pulled the latch wasn't included in the initial video, Lukie posted an unedited followup clip which shows the child first hit the window button, before pulling on the handle to unlock the door (below). She also explained Z'Naria's leg got stuck trying to get into the front seat, causing her to fall over -- joking, "My baby was tired!"

As for why she posted the video online, Lukie told Newsweek she originally just sent to her her family -- "but they suggested I make a TikTok of it." The original video has now been viewed more than 455K times and garnered over 78K likes.