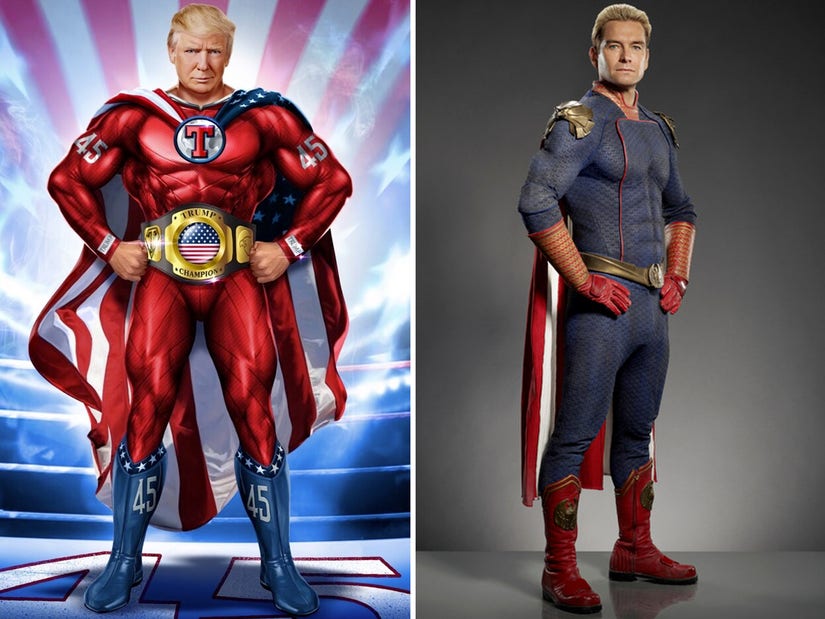 The creatives at the show followed suit with a "huge announcement" of their own.

Donald Trump may think the country is in need of a new superhero ... but his latest venture didn't go over well with the supes from "The Boys."

On Wednesday, the ex-POTUS teased that he would be "making a MAJOR ANNOUNCEMENT" on Thursday, exclaiming on his Truth Social page that "AMERICA NEEDS A SUPERHERO!" When the big reveal came, however, the "MAJOR" announcement was simply that he was releasing a bunch of ridiculous NFTs -- or "digital trading cards" -- showing him in full-superhero garb going for $99 a piece.

"The Boys" lead Antony Starr was one of the first from the show to react to the ludicrous images -- sharing one to his Instagram page, followed by a similar shot of him as the villainous Homelander on the Prime Video show.

"How come I wasn't alerted to the new character in season four?" he captioned the pic, along with some cry laughing emojis and a turkey. "This is a sim."

Costar Karl Urban also chimed in on Starr's comments, adding, "If I were you I'd talk to wardrobe about his cape, it can't be the SAME as yours!!" Laz Alonso also joked, "Trumplander?" -- while Joel McHale simply exploded in laughter, writing, "Hahahahahahhaa."

"Major Announcement." This is a funnier pay off than I could write btw. And he's got the flag cape!! #TheBoys #TheBoysTV @TheBoysTV @PrimeVideo pic.twitter.com/l86m7sJEq1

"The Boys" showrunner Eric Kripke also got quite a chuckle from the reveal as he highlighted the similarities between Trump and Homelander -- who, it should be reiterated, is an absolutely terrible person and the villain of the show.

"'Major Announcement.' This is a funnier pay off than I could write btw," Erikpe captioned the side-by-side. "And he's got the flag cape!!"

This isn't the first time Kripke has commented on those drawing comparisons between Trump and Homelander, after at least one of his supporter's co-opted the character for a pro-Trump rally back in 2020. At the time, the showrunner shared a photo and added, "Um ... are they actually watching the show?"

The official Twitter page for Vought International, the conglomerate creating supes on the series, then trolled Trump even more by sharing their own "Huge announcement."

"Huge announcement: Official Homelander digital collectible cards have arrived!" the account posted, along with an image of Starr's character.

"Celebrate our greatest hero's life and crimefighting career by owning an authentic and non-fungible JPEG of him. Buy now for 777 VoughtCoin while you still can!"

Huge announcement: Official Homelander digital collectible cards have arrived! Celebrate our greatest hero’s life and crimefighting career by owning an authentic and non-fungible JPEG of him. Buy now for 777 VoughtCoin while you still can! pic.twitter.com/YF99oD5Ejr