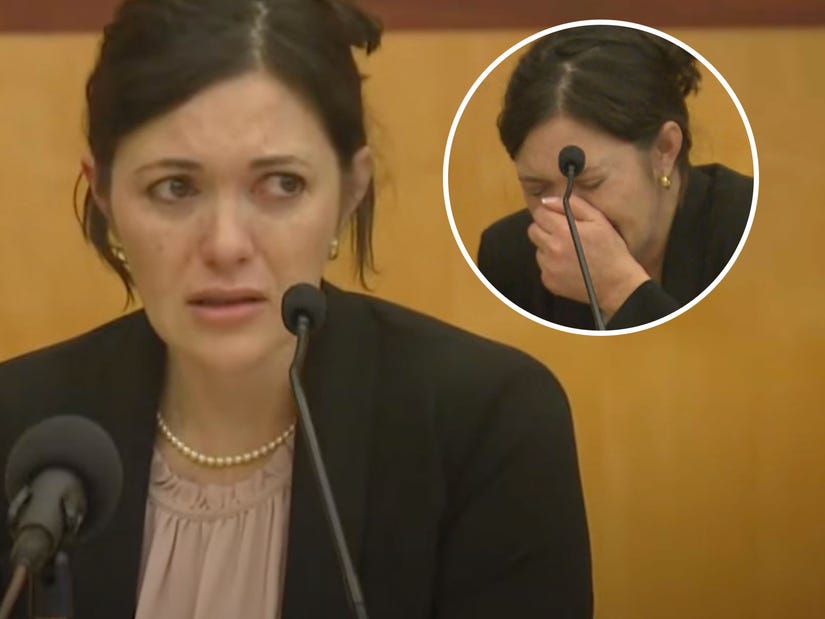 "It was the most violating, awful, gut-wrenching feeling ever," she said, claiming the photos were cropped and separated into folders by body part.

The 39-year-old woman accused of killing her former stepfather after allegedly discovering naked pictures of herself on his computer took the stand this week during her trial in San Diego County.

During her testimony on Friday, she described how she discovered the photos on the computer of Thomas Merriman, 64, while she was cleaning his home while he was in a recovery center after a fall.

"When I went to clean in his office area, I'm wiping things down, I bumped the mouse, and it shook the screen awake. There's a picture of female breasts on the screen. I have a beauty mark on my chest, those are my breasts," she said in court on Friday, according to CBS8.

She said there were more than 100 photos of herself, claiming he cropped the photos and divided them into photos by body part. She also claimed some of the photos were taken when she was as young as 16 and were from her laptop and a digital camera she didn't think he had access to.

When asked if she ever shared photos like those with Merriman herself, she said, "No, no, he was my dad."

Of what was going through her mind when she made the discovery, she told the jury, "It was the most violating, awful, gut-wrenching feeling ever. I felt sick, I felt I couldn't ... even touch my own skin. I don't know if there [are] words, not even in a movie have I seen something so sick."

Later in her testimony, she said she "got angry and I poured some of the Jack Daniels, I poured it on his desktop computer and then I took out what I thought was the hard drive and destroyed it."

Throughout her testimony while questioned by her defense attorney, Janks claimed Merriman had just passed out after taking prescription pills and drinking whiskey after she picked him up from from the recovery facility on December 31. She said that after nobody she contacted helped her move him, she left him in the car to sleep it off overnight -- and when she went out to her car the next morning, she saw from afar he hadn't moved at all and panicked.

"I've seen Tom drink a lot more ... I didn't think anything was going to happen to him," she said under cross-examination later on Friday afternoon.

She later admitted under oath that she covered up his death -- hiding him under a pile of trash in the driveway -- and said she "panicked" and "didn't really know what to do" because she knew she was the victim's last known acquaintance and because of what she had done to his computer. "I didn't want to get blamed for killing him," she said, per the San Diego Tribune.

She added that she wasn't trying to hide anything from police when they showed up to looking for Tom, but "just wanted an attorney" before saying where he was. "I didn't think I could just leave him out there and the police would never find him," she added.

Janks denied hiring anyone to kill her stepfather, wanting him dead, giving him drugs or strangling him. "No, I would never, no! I wouldn't do that to anybody," she told the jury.

The medical examiner said the cause of death was acute zolpidem intoxication; Zolpidem -- or Ambien -- is a type of sleeping pill. Prosecutors have accused Janks of plying him with the pills and suffocating him and hoping to make it look like an overdose.

Closing arguments are expected next week.