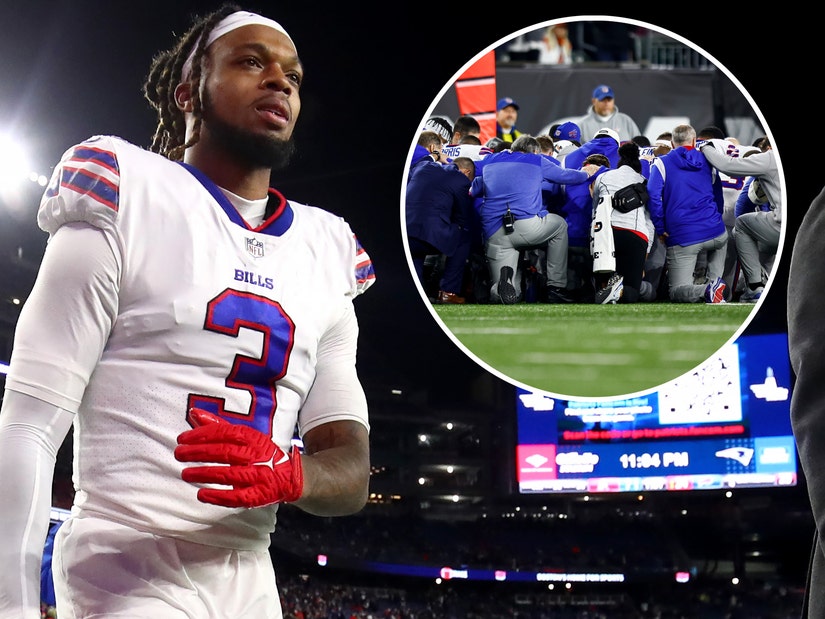 "Please pray for our brother," said Bills quarterback Josh Allen -- while Tee Higgins of the Bengals added, "I'm praying that you pull through bro."

The entire sports world is sending its support to Buffalo Bills safety Damar Hamlin, who collapsed during a game against the Cincinnati Bengals on Monday night.

Hamlin was given CPR on the field, before he was taken to the University of Cincinnati Medical Center and the game was suspended. The Bills eventually released a statement explaining Hamlin "suffered a cardiac arrest following a hit in our game versus the Bengals. His heartbeat was restored on the field and he was transferred to the UC Medical Center for further testing and treatment. He is currently sedated and listed in critical condition."

Fans held a vigil outside of the hospital after his arrival, while teammate Stefon Diggs and Bengals coach Zac Taylor were also spotted at the location. "This is my teammate, I have to be here for my teammate," ESPN's Coley Harvey reported Diggs said before going in -- after initially getting some pushback from cops at the door.

Stefon Diggs joined Bengals and Bills fans outside the University of Cincinnati Medical Center in support of Damar Hamlin.@ColeyHarvey reports from Cincinnati: pic.twitter.com/H9NsrANay8

While Hamlin's fans have shown their support by donating millions to a toy drive he organized overnight, his teammates, those on the Bills, Bengals and the sports world at large sent prayers to the safety via social media.

"Demar Hamlin is a kind caring extremely hard worker. He is loyal honest and can always put a smile on your face. He is more than an athlete, he is a son and brother," wrote Bills offensive lineman Rodger Saffold. "I pray God gives him mercy and brings him back to us.."

"Prayer is power and Prayer is POWERFUL we need the world to pray for Damar Hamlin and his family #Love #3," Bills offensive tackle Dion Dawkins also tweeted out.

My prayers and thoughts go out to @HamlinIsland the Hamlin Family. I’m praying that you pull through bro. Love 🙏🏾💙

Tee Higgins, who Hamlin tackled moments before collapsing, also sent his support -- tweeting, "My prayers and thoughts go out to @HamlinIsland the Hamlin Family. I'm praying that you pull through bro. Love."

Added Benagls wide receiver Ja'Marr Chase: "I wanna send a prayer to Damar and his family."

The Bengals as a team also tweeted, "Sending our thoughts and prayers to Damar."

Chris Pronger, a former hockey player who collapsed during a playoff game in 1998, compared their situations -- tweeting, "Prayers that Damar Hamlin can have the same outcome that I was fortunate to have with my incident. Our thoughts and prayers go out to Damar, his family, teammates and the greater NFL community during this incredibly scary time."

Disney's Bob Iger said "tonight we should all be praying" for Hamlin, while New York governor Kathy Hochul echoed those sentiments by writing, "Praying for Damar Hamlin. Our hearts are with his family, loved ones, and the entire @BuffaloBills community."

Actress Kerry Washington, whose husband is former NFL star Nnamdi Asomugha, also tweeted, "#DamarHamlin you are in my prayers."

A number of sports teams also tweeted out their prayers for Hamlin, including the Dallas Cowboys, New York Giants, Seattle Seahawks, Arizona Cardinals, Boston Bruins and the entire NBA.

ESPN commentator Robert Griffin III, meanwhile, urged fans to focus on messages of support for Hamlin -- telling them to not share footage of the collapse itself, but photos of his team praying for his recovery.

Please don’t share the video of the Damar Hamlin play. Share this because we are all Praying for him and his family. pic.twitter.com/QnO7DpAo7u