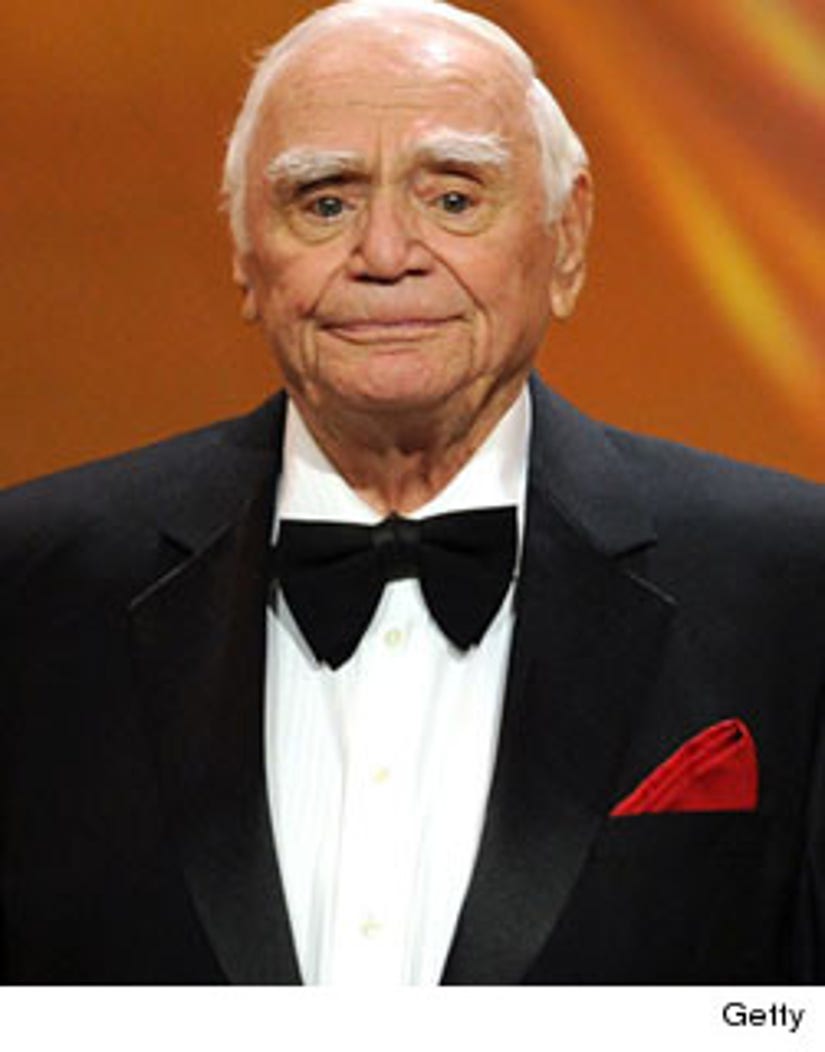 LOS ANGELES (AP) -- He was a tubby tough guy with a pug of a mug, as unlikely a big-screen star or a romantic lead as could be imagined.

Yet Ernest Borgnine won a woman's love and an Academy Award in one of the great lonelyhearts roles in "Marty," a highlight in a workhorse career that spanned nearly seven decades and more than 200 film and television parts.

Borgnine, who died Sunday at 95, worked to the end. One of his final roles was a bit part as a CIA records-keeper in 2010's action comedy "Red" -- fittingly for his age, a story of retired spies who show that it's never too late to remain in the game when they're pulled back into action.

"I keep telling myself, 'Damn it, you gotta go to work,"' Borgnine said in a 2007 interview with The Associated Press. "But there aren't many people who want to put Borgnine to work these days. They keep asking, 'Is he still alive?"'

And yet people put him to work -- and kept him working -- from his late-blooming start as an actor after a 10-year Navy career through modern times, when he had a recurring voice role on "SpongeBob SquarePants," became the oldest actor ever nominated for a Golden Globe and received the lifetime-achievement award last year from the Screen Actors Guild.

Borgnine died of renal failure at Cedars-Sinai Medical Center with his wife and children at his side, said spokesman Harry Flynn.

With his beefy build and a huge orb of a head that looked hard enough to shatter granite, Borgnine naturally was cast as heavies early on, notably as Sgt. Fatso Judson, the brute who beat Frank Sinatra's character to death in 1953's Pearl Harbor saga "From Here to Eternity."

More bad guy roles followed, but Borgnine showed his true pussycat colors as lovesick Marty Piletti, a Bronx butcher who, against all odds and his own expectations, finds romance with a wallflower in "Marty," adapted from Paddy Chayefsky's television play. Borgnine won the best-actor Oscar, and the film picked up three other awards, including best picture.

It turned out to be Borgnine's only Oscar nomination, yet it was a star-making part that broke him out of the villain mold. Borgnine went on to roles in such films as "The Dirty Dozen," "The Wild Bunch," "The Flight of the Phoenix," "The Poseidon Adventure" and "Escape from New York," but after "Marty," the veteran sailor's most memorable character appropriately came with the title role of the 1960s TV comedy "McHale's Navy" and its big-screen spinoff.

Mischievous con man McHale, commander of a World War II PT boat manned by misfits and malcontents, was far closer in spirit than shy Marty or savage Fatso to the real Borgnine, who had a cackling laugh and a reputation as a prankster.

No one knew Borgnine could act at all -- himself included -- until he came home from World War II after his 10-year Navy stint. He enlisted in 1935, was discharged in 1941, then re-enlisted when the war began, serving on a destroyer.

As he contemplated what to do after the war, Borgnine's mother suggested acting.

"She said, 'You always like getting in front of people and making a fool of yourself, why don't you give it a try?"' Borgnine recalled last year, shortly before receiving his SAG lifetime honor. "I was sitting at the kitchen table and I saw this light. No kidding. It sounds crazy. And 10 years later, I had Grace Kelly handing me an Academy Award.

"Marty" made his career, but the success also brought complications for Borgnine.

"The Oscar made me a star, and I'm grateful," Borgnine said in 1966. "But I feel had I not won the Oscar I wouldn't have gotten into the messes I did in my personal life."

Those messes included four failed marriages, including one in 1964 to singer Ethel Merman that lasted less than six weeks.

But Borgnine's fifth marriage, in 1973 to Norwegian-born Tova Traesnaes, endured and brought with it an interesting business partnership. She manufactured and sold her own beauty products under the name of Tova and used her husband's rejuvenated face in her ads.

During a 2007 interview with The Associated Press, Borgnine expressed delight that their union had reached 34 years. "That's longer than the total of my four other marriages," he commented, laughing heartily.

In 2007, Borgnine became the oldest Golden Globe nominee ever, at 90, for the TV movie "A Grandpa for Christmas." It came 52 years after his only other Globe nomination, for "Marty," which he won.

He didn't win that second time, but Borgnine was as gracious as could be about it.

"Hey, I already got one," Borgnine said. "I was nominated and I think that's wonderful. You don't have to win them all."

On Jan. 24, 2007, Borgnine celebrated his 90th birthday with a party for friends and family at a West Hollywood bistro. Still boisterous, Borgnine made a rare concession to age at 88 when he gave up driving the bus he would take around the country, stopping to talk with local folks along the way.

During an interview at the time, Borgnine complained that he wanted to continue acting but roles were tough to find at his age.

"I just want to do more work," he said. "Every time I step in front of a camera I feel young again. I really do. It keeps your mind active and it keeps you going."