Armie Hammer and Johnny Depp ride onto the big screen in "The Lone Ranger" on July 3rd. But did the two leading men, who play The Lone Ranger and Tonto, look into their own family histories to prepare for the modern-day Western?

Armie confessed to toofab's Lawrence Yee that he "didn't have any real connections to Native Americans," but Ancestry.com has learned otherwise! Check out his fascinating family tree below: 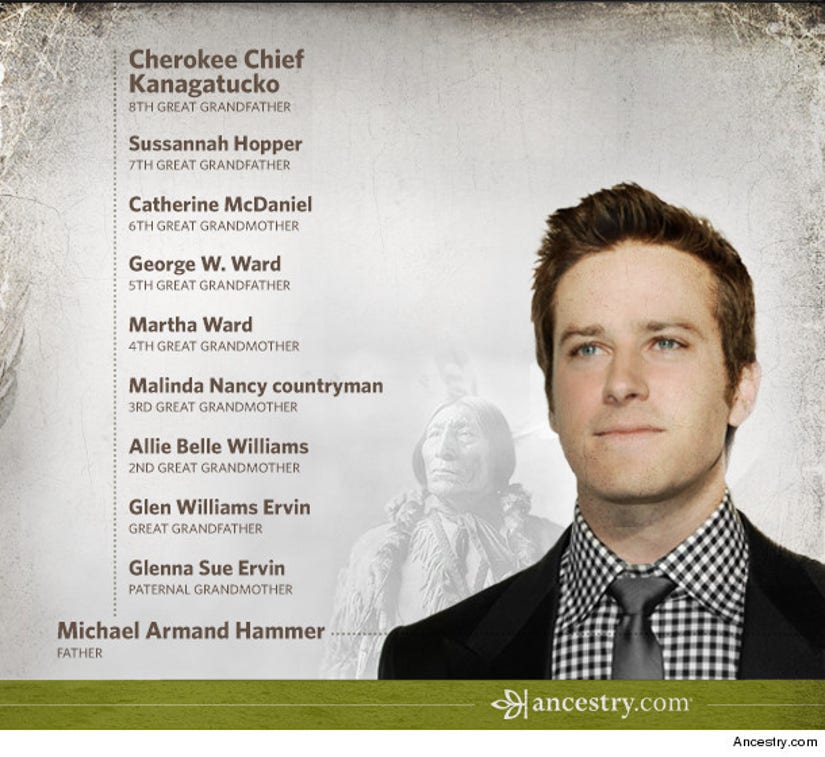 Johnny may play Tonto, but it's Armie who has Native American roots ... major ones.

Armie's 8th great-grandfather was Cherokee Chief Kanagatucko, known as "Old Hop" or "Stalking Turkey." Tracing Native American ancestry was challenging given that many records were passed down through oral history, so it's significant that Armie is a proven descendant of this early Cherokee leader.

Chief Kanagatucko was adopted by Chief Moytoy, first emperor of the Cherokee, and was appointed chief after the death of his father. Old Hop's nickname stemmed from his old age and limp, and he was a known advocate of peace and friendship during the French and Indian War and the Seven Years' War. He also carried the title of the First Beloved Man, which was the spiritual leader or high priest for his tribe.

Even more remarkable? Johnny Depp also has an ancestor that was a freedom fighter. Johnny's 8th great-grandmother, Elizabeth Key, was the first African American woman to sue for her freedom and win in court. Born to a British Aristocrat father and an African American mother, Key successfully won her freedom and the freedom of her infant son by invoking British colonial law, which stated that civil status was determined by the father. Her father, Thomas Key, (Depp's 9th great-grandfather) was an Englishman and a member of the Virginia House of Burgesses.

Who would've guessed Johnny is descended from slaves?

So not only do Armie and Johnny play freedom fighters on screen, they're descended from real-life ones! Head over to Ancestry.com to research your own family tree, then check out photos from "The Lone Ranger" below: