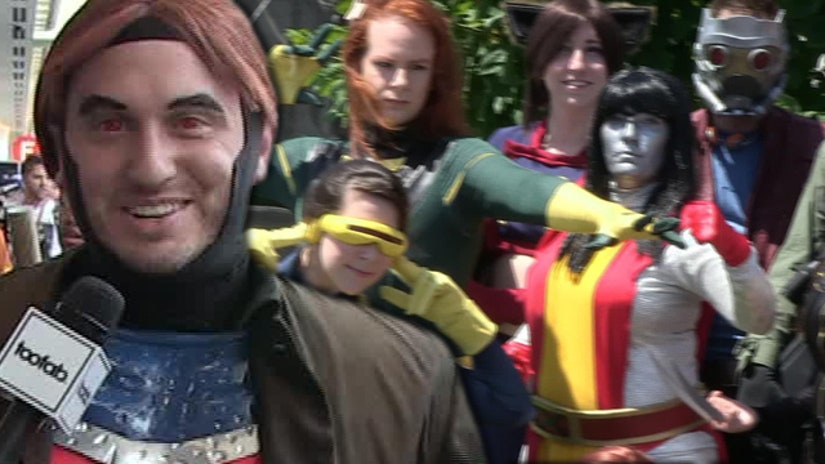 Comic-Con 2014 has come and gone, leaving a mess of TV, movies and celebrity news in its wake as thousands of costumed fans flee San Diego after a weekend of awesomeness.

But with so many panels, parties, press conferences, red carpets and announcements, it's easy to miss an item or two -- so we've pulled together everything you really need to know about what went down this year.

We've all been waiting to catch our first glimpse of Gal Gadot in her full Wonder Woman costume for "Batman v. Superman: Dawn of Justice," and on Saturday, director Zack Snyder delivered. After bringing Gal, Ben Affleck and Henry Cavill on stage for a surprise Hall H appearance, he unveiled her new look -- and it's pretty fierce!

See what some celebs at the Con thought about it below: 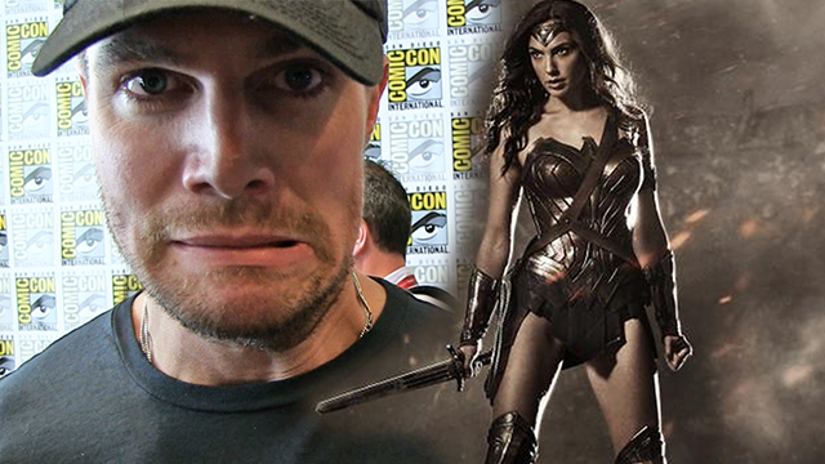 Fans were also treated to the first footage from the film, which showing Ben in his batsuit, flashing the Bat Signal on Cavill's Superman flying above. Superman's eyes glow red as he looks down on the Dark Knight, whose eyes glow eerily white. It was quick, but sent Hall H into a frenzy.

2.) The Avengers Assemble -- And Show Footage!

They showed four minutes of the flick (which we discuss in depth here), including a scene introducing us to the film's Big Bad and a montage of crazy moments from the highly-anticipated sequel.

The cast of "Ant-Man" also appeared during the panel, where Paul Rudd said he was popping his "Comic-Con cherry" -- prompting Michael Douglas to announce, to a room of children, that he'd "popped enough cherries" in his day. They also showed a clip for the crowd.

The studio also announced that a sequel to "Guardians of the Galaxy" will hit theaters July 28, 2017. 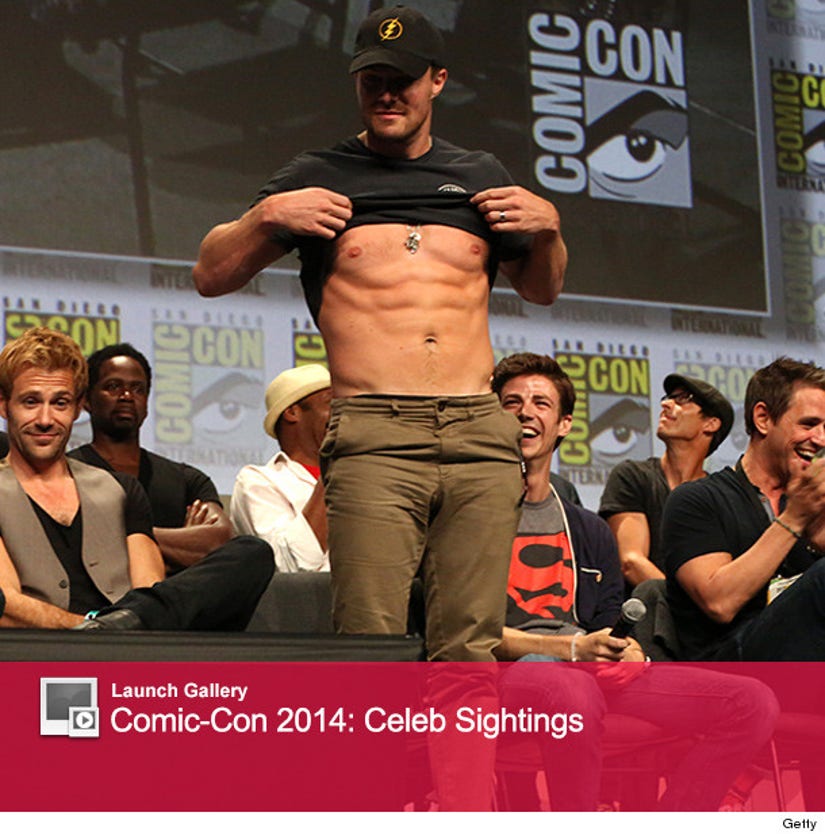 Stephen Amell hosted a pretty amazing panel on Saturday as well for Warner Bros. Television and DC Entertainment -- where the premiere of "Gotham" was screened, along with footage from "The Flash," "Arrow" and "Constantine."

And while it was awesome news to hear that Ra's al Ghul will be the main villain on "Arrow" this year, the biggest highlight of the night came near the end -- as someone in the audience asked Amell to show off his abs on stage.

It took some convincing, but he eventually relented ... and we thank him for that!

While the studio didn't have a panel this year, they still found a pretty amazing way to promote the upcoming "Hunger Games" sequel "Mockingjay -- Part 1." Partnering with Samsung, they set up an entire "experience" for fans right across the street from the Convention Center.

Once inside, these lucky fans were able to take a photo with holograms of Peeta and Johanna, visit Peeta's bakery, see some Capitol couture, get a custom t-shirt and, finally, see the first real trailer for the film. Read about the entire experience here.

It was only about a minute in length, but does a great job setting the mood for the flick, which hits theaters this November.

Biz Markie made an unexpected appearance during the Hall H panel for the upcoming animated feature, "Book of Life." After a clip of the film featuring the rapper and his signature song "Just a Friend" was shown to the audience, Biz walked out on stage and starting to break it down.

At one point, Channing Tatum joined in and even started dancing on stage. Amazing.

6.) "Game of Thrones" Gets Ridiculously Silly

While the show is known for its history of deaths and nasty situations, the panel for "Game of Thrones" got off on a decidedly hilarious note.

Instead of new footage, the audience was treated to an epic gag reel, one that may just include some of the funniest bloopers we've ever seen.

We got an extended look at the fifth season of "The Walking Dead," which finds Rick Grimes and his crew joining up with their Terminus captors to find a cure in Washington DC.

With new walkers, new weapons and some creepy new characters, the trailer was intense, freaky and everything we've come to expect from the AMC series. Our biggest question: Where the heck is Beth?!?

While her situation looks rough, at least now we know she's not on the barbecue.

While the trailer doesn't explain much in terms of plot, it is definitely action-packed. According to the press notes, Max "becomes swept up with a group fleeing across the Wasteland in a War Rig driven by an elite Imperator, Furiosa (Theron)," only to end up in the middle of a "Road War."

9.) The Griffins Meet The Simpsons

Animation fans scored huge on Saturday, as five minutes of the upcoming "Family Guy" and "Simpsons" crossover event was shown to the crowd.

Titled "The Simpsons Guy," the episode will show what happens with Homer Simpson and Peter Griffin meet face to face. Judging by the drawn-out fight sequence in the clip above, it's safe to say it doesn't go well.

10.) And Finally, While Hosting the Panel for "The Hobbit," Stephen Colbert Wore This: 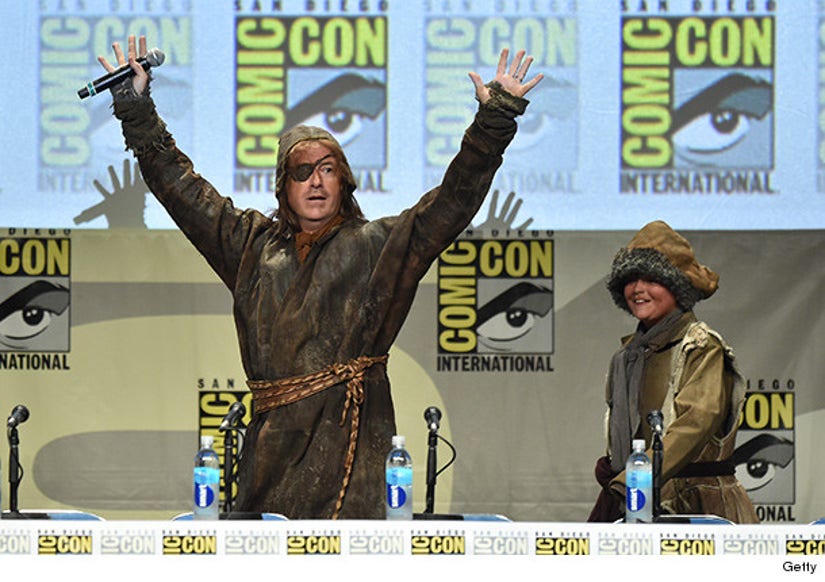