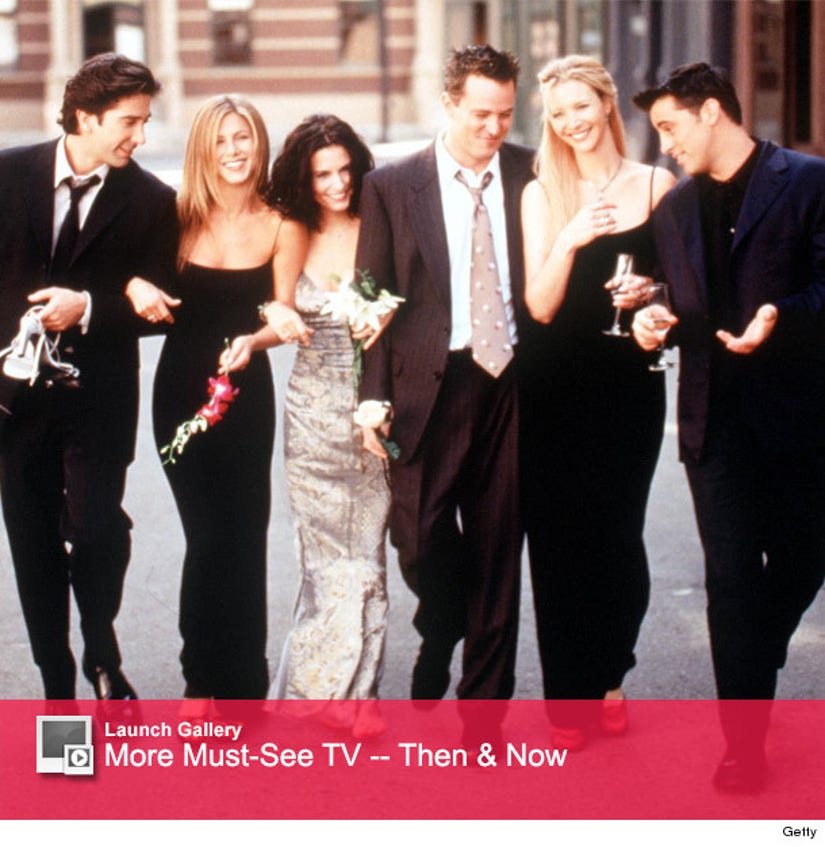 Many TV fanatics would consider "Friends" as one of the best shows ... ever.

To celebrate the 20th anniversary of the show's premiere -- which takes place today, September 22 -- we're taking a look back at the careers of the Central Perk six: Rachel, Monica, Phoebe, Ross,
Chandler and Joey.

Click the gallery above to see how everyone has aged -- and keep reading to see what they've been up to since the classic sitcom.

Jennifer Aniston won an Emmy playing the perfectly coiffed Rachel Green. She later became one of Hollywood's biggest stars on the big screen, starring in movies like "Office Space," "The Break-Up" and "Horrible Bosses." She was married to Brad Pitt from 2000-2005 and is currently engaged to Justin Theroux.

"Friends" Reunion on Jimmy Kimmel Live Is EVERYTHING -- Watch Now!

Courteney Cox -- a.k.a Monica Gellar -- starred in the four "Scream" movies, where she met ex-husband David Arquette. The couple has one daughter, Coco, and she's currently engaged to rocker Johnny McDaid. The 50-year-old actress also starred on "Dirt" and currently headlines "Cougar Town."

Lisa Kudrow won an Emmy for her role as Phoebe Buffay and later starred on "The Comeback" and "Web Therapy." She also appeared in "The Opposite of Sex," "Analyze This" and "Easy A." She had her only child with husband Michel Stern while on "Friends," and her pregnancy was written into the show.

David Schwimmer initially turned down the role of paleontologist Ross Geller, but it went on to become his biggest role. The actor went on to voice Melman in the "Madagascar" films, and he made his feature directorial debut with 2008's "Run Fatboy Run." He married Zoe Buckman in 2010. They have one child, daughter Cleo.

Matthew Perry made viewers laugh as Chandler Bing on the hit NBC series, earning a 2002 Emmy nomination for his work. He later played the adult version of Zac Efron's character in "17 Again" and also starred in "Mr. Sunshine" and "Go On."

Matt LeBlanc was the only star to get a spin-off sitcom, but the short-lived "Joey" was canceled after two seasons. He currently plays a exaggerated version of himself on "Episodes" and has his own production company, Fort Hill Productions.

While we would love to see our favorite "Friends" back together, there are no plans for a reunion.

"The show is over. What was at the heart of the show is done," show creator Marta Kauffman told EW. "People say they want it, and the more that we say it's a bad idea, people [disagree]. But I think if we actually gave it to people, there would be such backlash," co-creator David Crane added.

We'll always have Jimmy Kimmel's mini reunion with Aniston, Cox and Kudrow -- check out the clip below.

Plus, check out the gallery above to see what the stars from series like "Will & Grace," "Frasier" and "Just Shoot Me" all look like now!